Zonkeys attest to the variations possible within the “horse kind.”

Who (but the Russians) can resist the world’s newest zonkey, Telegraph? Born in a private Crimean zoo, Telegraph is a reminder of an important biblical truth. He represents the biodiversity that can develop within each created kind of animal. Enormous variety has developed since the ancestors of today’s land animals disembarked from the Ark about 4,350 years ago.

Telegraph was an unplanned addition to the world’s zonkey population. Zonkeys are donkey-zebra hybrids, also known as zedonks and several other names. Telegraph’s mother seemed lonely, Taigan zoo director Oleg Zubkov said. “So on the advice of a zoologist we moved her in with several other hoofed animals and she really liked the donkey.” Animals today still reproduce within their created kinds, just as God designed them to do about 6,000 years ago. So they did. But Telegraph won’t, as hybrids like himself are generally infertile.

Usually with zonkeys the donkey is the mother, but not in this case, nor in the April 2014 birth of a zonkey named Khumba at Mexico’s Reynosa Zoo, where the zoo reports the father was a dwarf albino donkey. Last year Ippo, a zonkey in Florence, Italy, was born with a zebra father, which is the more common scenario. Technically, when the zebra is the mother the foal is called a donkra, but that word lacks the zinging satisfaction most of us derive from rhyming words with z’s. 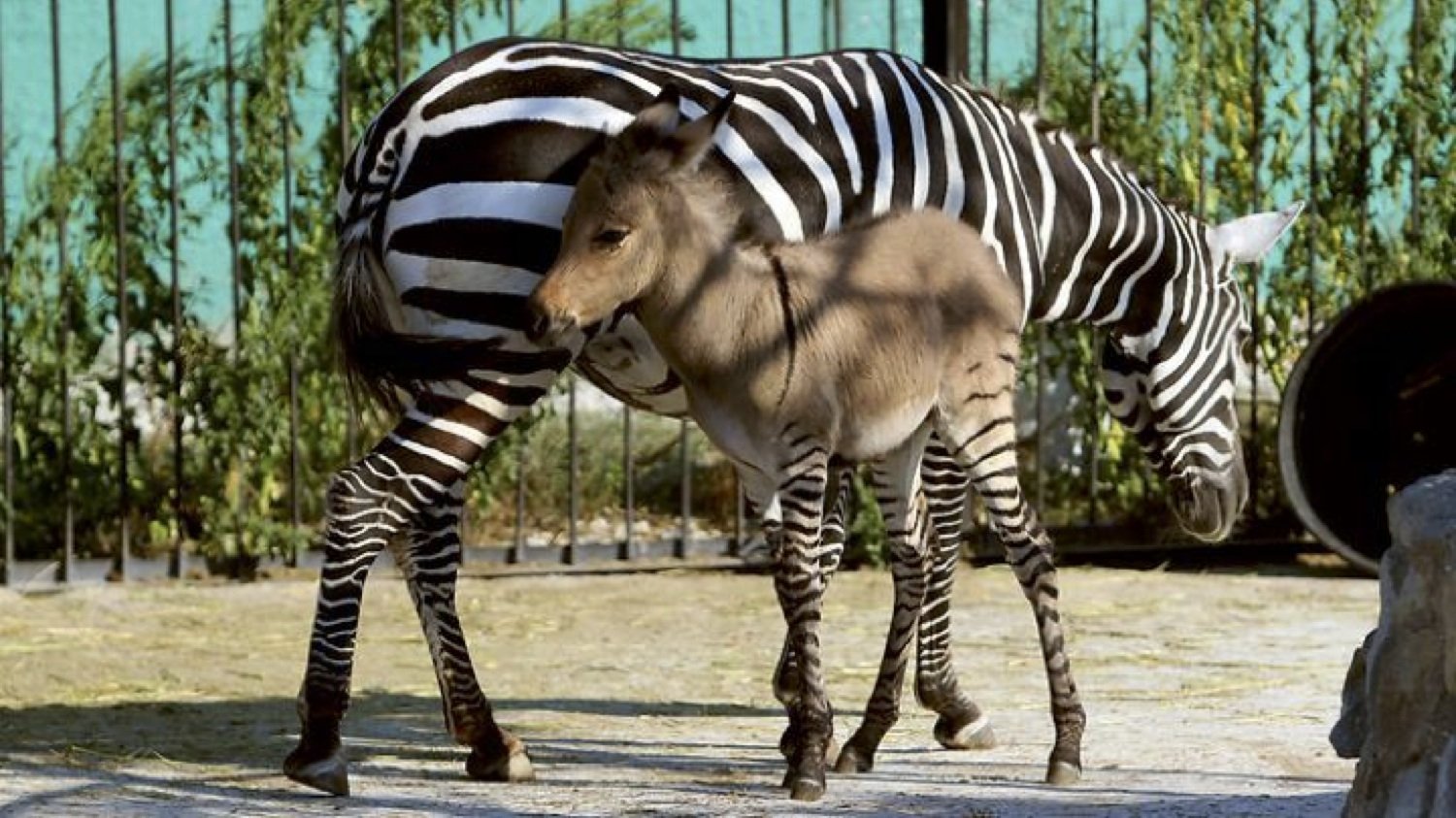 This is Telegraph, the latest addition to the world’s zonkey population, with his mother. When she became lonely in her private quarters, she was allowed to live with the other hoofed animals, including Telegraph’s father, a donkey. Zebras and donkeys are able to hybridize because they are of the same created kind, the horse kind. Hybrids within the horse kind are usually infertile because their parents have different chromosome numbers, giving the hybrids non-homologous chromosomes that are unable to match up properly for meiosis to make eggs or sperm. Image by AAP through SBS News

Despite the popularity of the adorable baby zonkey with both patrons of the zoo just twenty miles from the Crimean city of Simferopol and internet viewers entranced by his photos and appearance on YouTube, his existence has brought criticism from the Moscow Zoo. “This sort of marketing is not justified or scientific,” says Moscow Zoo spokesman Anna Kachurovskaya. “Zoos are for preserving wild species, that is one of their most important goals.” She says, “Such things don’t happen at civilized zoos, but can occur at private zoos or on farms.”1 (Whether the Russian criticism of the Crimean zoo has any politically biased basis is a matter of conjecture. Russia did seize the Crimean Peninsula, historically a long-fought-over piece of real estate, in March of this year.)

Zebra hybrids (collectively called zebroids) may come from a cross of any zebra species with any other equine. Despite Moscow’s assertion that hybridizing species is unscientific, they have been purposely bred by many civilized people for two centuries, producing zonkeys, zorses, zebrules, horbras, hebras, zonies, and so forth. Some very interesting effects have been achieved through selection of a non-zebra parent with patterned depigmented areas. Zonkeys typically have stripes on their legs. 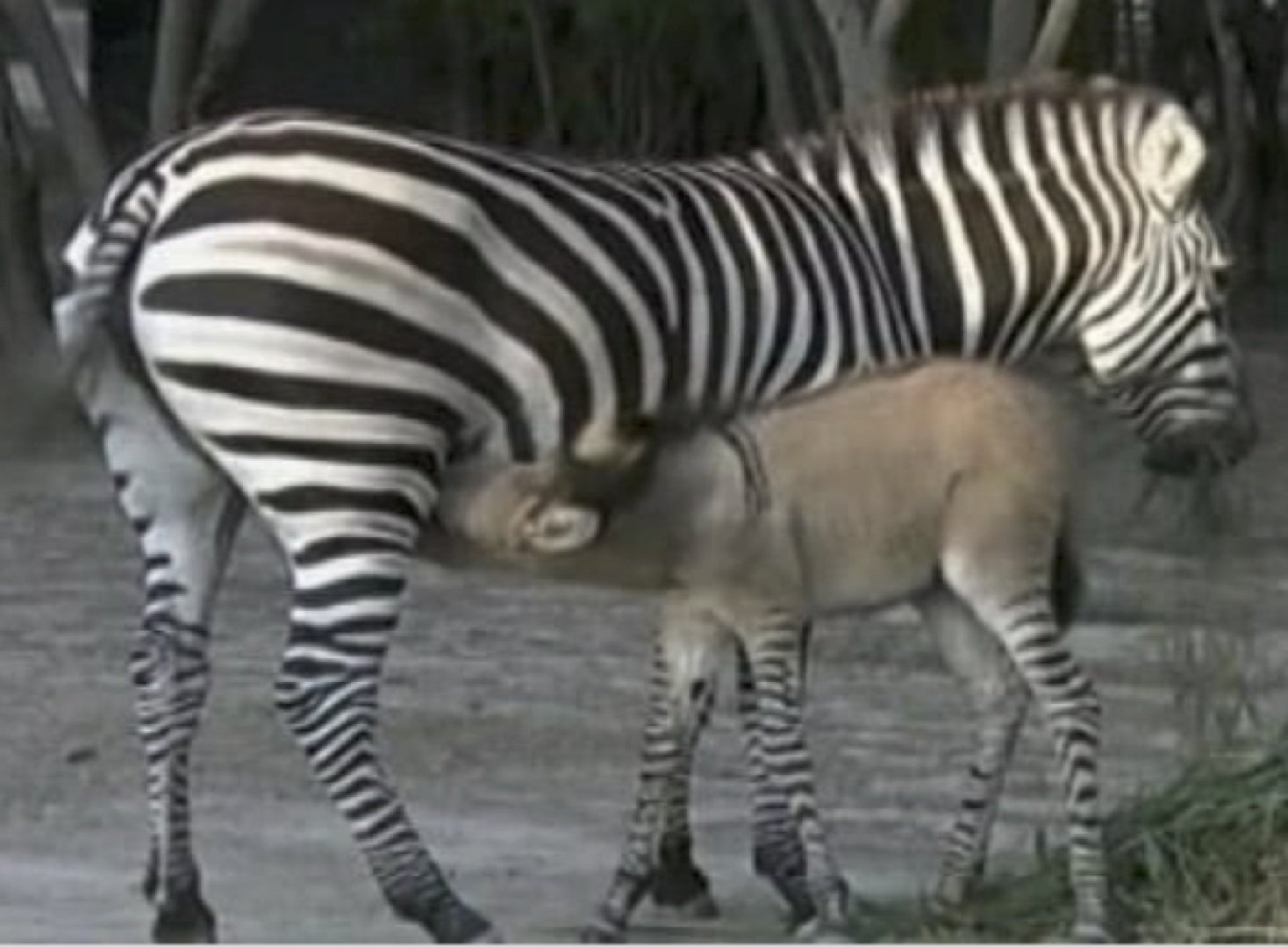 This zonkey is Khumba, seen here with his mother. He was born in April 2014 at the Reynosa Zoo in Mexico. Like Telegraph, who was recently born in a Crimean Zoo, he is the unplanned product of a zebra mother and a donkey dad. Most zonkeys have a zebra for a father. Image: APTN, Today Show, screen shot from www.today.com

Regardless of zoo philosophy, the well-publicized births of three zonkeys in little more than a year is a reminder that such equine mixing is not as “rare” as some may have thought. Obviously donkeys are not likely to encounter zebras in the wilds of the Crimea, Italy, or Mexico. However, zonkeys do occur without any human interference in the wilds of South Africa.

Most, though not all, equine hybrids are infertile. Their genomes consist of genes acquired from parents with different numbers of chromosomes. In the case of the horse family, or kind, this gives the hybrid offspring all the genetic material they need to be normal functional animals. However, hybrids in the horse kinds have non-homologous chromosomes that are generally unable to match up properly for meiosis, the process by which gametes—eggs or sperm—are made. Therefore horse kind hybrids usually lack the ability to produce gametes (eggs or sperm) with a sufficient complement of chromosomes to pass on to the next generation.

This zonkey named Ippo is the unplanned foal of a male rescue zebra and a rare Italian Amiata donkey. He was born at a family-run farm in Florence, Italy, in July 2013. Zonkeys born of male zebras and female donkeys are the more common zonkey hybrid. Image: News Press Photo/Splash News through ABC News

Horses, zebras, and donkeys are all in the family Equidae. They are considered members of the “horse kind” by creation scientists because they are able to hybridize extensively. They, along with some extinct species, are descendants of the original horse kind that God created. These animals and their hybrids have many similarities, yet they differ dramatically in the number of chromosomes. Even the different species of zebra differ in their chromosome number. (Horses have 64, donkeys have 62, and zebras have 32, 44, or 46.) How can this be? Is this the result of evolution? Not at all. 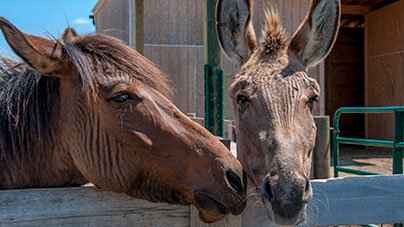 The petting zoo at the Creation Museum is a fun place for children and adults to experience close up encounters with unique animals, like this zonkey and zorse. Not only can the petting zoo help develop a respect for God’s animal creations, it can also help answer important questions related to the history of Noah’s Ark. Image from CreationMuseum.org.

Geneticists (both evolutionists and creationists) are still trying to sort out how the most ancestral kind of horse ended up with descendants with so many different chromosome numbers.2 Dr. Jean Lightner, who has written extensively on the topic of baraminology—the science of determining which species of animals descended from which “created” (bara) “kinds” (min) of animals, explains how these animals function so well with such diverse genetic equipment and why this has nothing to do with molecules-to-man evolution:

The differences in chromosome number in these different members of the horse kind show that changes have occurred in how the DNA (genetic information) is packaged. Some of the changes are a bit complex: separate chromosomes have fused together and some centromeres appear to have changed position. However, this is not evolution in the sense that anything truly new has arisen. Rather it is a repackaging of what already existed.

Rearrangements in chromosomes do not appear to be the result of just chance, random processes. It is very important that such changes occur in a way the integrity of the information is maintained. In order for that to be accomplished, it would seem cellular mechanisms would be required to regulate these relatively rare events.

What a marvelous Creator we have, a God who engineered the arrangements for enormous biodiversity3 to develop in the original created kinds of animals. That great diversity has developed in just the few thousand years since the global Flood is testimony to His great design, both the information He created in the genomes as well as the cellular mechanisms that can accomplish this. These animals attest to the biblical history we infer from Genesis chapter one—that God created animals to reproduce “after their kinds.” For this reason, we see hybrids like “ligers” and “tigons” that help us discern the members of the “cat kind,” but we never see cat-canine hybrids or horse-cow hybrids simply because animals (and their genes) do follow God’s creative blueprint laid down in Genesis, reproducing only within their created kinds. Telegraph was named for a local newspaper, and to the world this is the news he should declare: God’s Word is true from the very first verse.