Alston’s singing mice—mice that use monotonal song to communicate over large distances in the wilds of Costa Rica—are research subjects in the University of Texas at Austin laboratory of Dr. Steven Phelps. His latest research with these exotic rodents concerns the genetic regulation underlying Scotinomys teguina’s ability to chirp up to 20 times per second. His team believes the genetic regulator for this mouse’s behavior may provide clues to genetic factors involved in autism and other human language disorders. 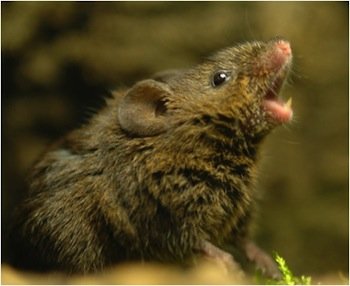 The singing mouse Scotinomys teguina chirps up to 20 times per second. Both males and females chirp, though males chirp more. Their song may seem like birdsong to humans, but the mouse song is usually composed of only one note. Image from Bret Pasch and audio of the mouse singing are from www.tacc.utexas.edu (the song is played back at a slower rate to demonstrate its complexity).

“FOXP2 is famous because it's the only gene that's been implicated in human speech disorders specifically.”

The regulatory gene Phelps studies is called FOXP2. Like many genes, this one has homologous versions present in various animals and people. “FOXP2 is famous because it's the only gene that's been implicated in human speech disorders specifically,” says Phelps. Mutation of even one allele of this regulatory gene has been associated with a variety of human language problems—difficulty grasping grammatical concepts, inability to perform precise mouth movements needed for clear speech, and so forth.

Phelps hopes that by determining which parts of the FOXP2 gene are uniformly normal in singing mice and which parts can be mutated without loss of function, he’ll get a clue to what genetic sites are significant in humans. “We can choose any number of traits to study but we try and choose traits that are not only interesting for their own sake but also have some biomedical relevance,” says Phelps. His associate Lauren O’Connell, who works with a number of animal models, commented, “Each of these model systems has something unique to contribute that teaches us about biology that is still applicable to humans.”

Often we see “evolution” get credit for medical breakthroughs, but if Phelps learns something from singing mice applicable, for instance, to autism, it will not be a proof of the importance of evolutionary belief—as we so often hear—but rather a deciphering of the genetically designed similarities that bears fruit. Our common Designer naturally uses many common designs, from genes to anatomical structures, to perform similar functions in different kinds of animals and people.