Visual Forming of a Baby's Face

Face to philtrum: the ballet behind your beautiful smile 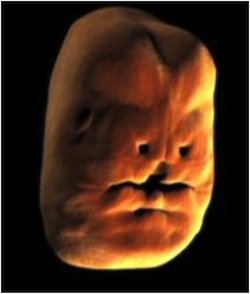 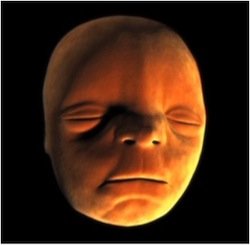 Two of the images seen in the video, “How a face forms in the womb.” In the first image, the structures that ultimately fuse to form the face are partially rotated toward their final position. The dent below your nose is seen as on opening in the central portion of this embryonic face. When you watch the video depicting the entire sequence, you will see that these structures begin in much more out-turned positions. By watching the video several times and focusing your attention on specific landmarks (the eyes, the nose, etc.) each time, you will be able to visualize the process by which God shaped your own face. (Images and video from the BBC ScienceOnEden TV series Inside the Human Body can be viewed in their entirety at www.newscientist.com)

Last summer, the BBC host of Inside the Human Body was feeding the public some fishy fables about human evolutionary origins. Part of his “evidence” was this compelling time-lapse video showing the development of the human face between 1 and 3 months post-conception. Now New Scientist TV has posted the video along with a bit more information about the graphic artistry behind its production.

Combining information from a number of sources, artists produced a series of virtual sculptures and then matched them point-for-point and structure-for-structure. As graphic researcher David Barker explains, that was really difficult since a number of the anatomical structures were completely unformed for much of the time covered in the video. “It was a nightmare for structures like the nose and palate, which didn't exist for most of the animation,” he says. “Their formation is a complicated ballet of growth and fusion of moving plates of tissue.” Three major facial components must form separately and then with precision timing rotate and fuse at the philtrum, the little indentation between your nose and lip.

Commenting on the formation, rotation, and fusion involved in producing an ordinary human face from the rather wall-eyed form shown at the beginning of the video, evolutionist Michael Mosley has written, “The way this happens only really makes sense when you realise that, strange though it may sound, we are actually descended from fish. The early human embryo looks very similar to the embryo of any other mammal, bird or amphibian - all of which have evolved from fish.”1 His comments reflect an interpretation based on his worldview, which attempts to explain how this scenario of embryonic development could sensibly develop without a Creator. However, the genetic information in a fish is insufficient to form anything but a fish, so it is Dr. Mosley’s explanation that does not make sense.

Our common Designer uses common designs to accomplish a variety of purposes.

The brief description provided with the video as now posted on the New Scientist website actually refrains from making the evolutionary claims that accompanied last year’s airing. As we enjoy watching the ballet orchestrated by our divine Designer who—according to Psalm 139:14–17 formed each of us in our mother’s womb, seeing all our parts when they were yet unformed—we really should be reminded of His purposeful design. Most fishes’ eyes remain on the sides of their heads—well-suited for their lifestyles. Flatfish eyes, as we recently discussed, move into positions suited for their lifestyles. Our common Designer uses common designs to accomplish a variety of purposes.

Human eyes, along with the rest of the human face, only end up in the proper positions by initially forming in the unusual but necessary positions where we see them on the video and then rolling and twisting into place. God as a precision engineer has arranged for the parts to influence each other and have sufficient space to take shape and then—with precise timing—to fold and fuse. Cleft lip and palate and a number of other birth defects can occur when there is an error in this process.

These images were originally used by the BBC host Dr. Mosley last year to resurrect Ernst Haekel’s discredited ideas of embryonic recapitulation—the embryo rehearsing its evolutionary past in the womb. These video images differ from Haekel’s in that they have not been altered to deceptively become an evolutionary proof. It is unfortunate that evolutionists such as Mosley, however, persist in applying an evolutionary interpretation to even unadulterated images. We must remember that the embryonic development being depicted reveals what actually occurs and is observable whereas the evolutionary interpretations often applied to them represent an imagination-based attempt to explain life without God.

Be sure to read more about the details of this embryonic ballet orchestrated by God, who sees us as fully human even while we are yet unformed, at “Vestigial Hiccups, Folding Fish-eyes, and Other Fables: Our Fishy Forebears . . . Again!”