Richard Leakey, part of the “first family of paleontology,”1 predicts skepticism about evolution will soon be extinct. He predicts the next 15 to 30 years will produce scientific discoveries supporting evolution so overwhelming “even the skeptics can accept it.” But, if he’s wrong, he predicts a bleak future for humanity.

Richard Leakey followed in the footsteps of his famous parents Louis and Mary Leakey—evolutionary paleontologists credited with numerous hominid discoveries—rather than those of his paternal grandparents, who were missionaries in Kenya.2 Richard Leakey is an atheist but, according to Associated Press, “insists he has no animosity toward religion.” He doesn’t mind people having faith in their own good works and a happy afterlife, but he believes humanity’s salvation is to be found only in evolution.

“If you get to the stage where you can persuade people on the evidence, that it’s solid, that we are all African, that color is superficial, that stages of development of culture are all interactive,” Leakey says, “then I think we have a chance of a world that will respond better to global challenges.” He is concerned about both biological and sociocultural threats to human survival.

Humanity, Leakey contends, may not be able to prevent its own extinction without a firm belief in evolution.

Humanity, Leakey contends, may not be able to prevent its own extinction without a firm belief in evolution. “If we’re spreading out across the world from centers like Europe and America that evolution is nonsense and science is nonsense, how do you combat new pathogens, how do you combat new strains of disease that are evolving in the environment?”

Of course, for Leakey, evolution is an irrefutable fact. “If you don’t like the word evolution, I don’t care what you call it, but life has changed,” he says, and adds, “You can lay out all the fossils that have been collected and establish lineages that even a fool could work up. So the question is why, how does this happen? It’s not covered by Genesis. There’s no explanation for this change going back 500 million years in any book I’ve read from the lips of any God.” Creation scientists do not, however, deny that the world and the life in it has changed through a number of natural processes, but those processes do not include evolution of life from non-life or evolution of humans from ape-like ancestors.

An ardent conservationist, Leakey believes acceptance of evolution is essential to the medical research needed to save humanity from extinction. “We may be on the cusp of some very real disasters that have nothing to do with whether the elephant survives, or a cheetah survives, but if we survive.” His comments perpetuate the fallacy that antibiotic resistance is molecules-to-man evolution in action. As explained in many articles on this website, however, microbes are designed to change, producing new varieties, and mechanisms such as natural selection can result in resistant populations of pathogens. But the sort of observable change seen in microbes does not supply the genetic information to produce new kinds of creatures—or the sort demanded by a hominid evolutionary tree. 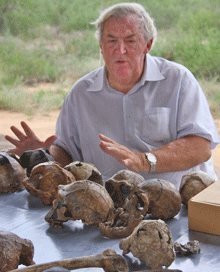 Evolutionists believe humans evolved from ape-like ancestors. Because of this preconceived notion, they consider most ape-like fossils to be hominids (human ancestors). If they can unearth and arrange a chronological series of fossils each displaying progressively more human-like features, then skeptics who deny evolution, Leakey believes, will be silenced, marginalized, or ignored. However, it is only evolutionary imagination and art work that ancestrally connect the varieties of apes and humans.

Biblically we know God created animals (including primates) and Adam and Eve on the sixth day of Creation Week about 6,000 years ago. The fossil record contains samples of many kinds of animals, but transitional forms are absent because God designed animals and humans to reproduce “after their kinds,” not to evolve one into another. Many fossilized animals are extinct, including the kind of ape popularly known as Lucy, Australopithecus afarensis. (Read about the new holographic Lucy exhibit at the Creation Museum, and watch for an informative upcoming article about Lucy’s real legacy to learn more.) Fossils of humans from the Ice Age are found, too. (See “Were Cavemen Real?”)

But the fossil record is not so clear on the evolutionary lineage as Leakey claims. In fact, no transitional evolutionary ape-men are found at all, at least not any that stand up to careful scrutiny. Laying out fossils of various apes (like “Lucy” and “Ardi”) and various humans (like Homo neanderthalensis and Homo erectus) in a row does not prove evolution happened or that those species are ancestrally related. Only accepting as a starting point the unverifiable idea that hominid evolution must have happened results in such an interpretation.

Leakey says “even a fool” can look at the fossils and work up the evolutionary story. But the Bible considers someone who denies the existence of God to be just such a “fool.”

Leakey says “even a fool” can look at the fossils and work up the evolutionary story. But the Bible considers someone who denies the existence of God to be just such a “fool.” The Bible says, “The fool has said in his heart, ‘There is no God’” (Psalm 14:1). Those who accept the testimony of God (the only eyewitness to Creation) as authoritative can understand that the fossil record is indeed “covered [i.e., explained] by Genesis.” We don’t find “500 million years” covered in the Bible because the earth is only about 6,000 years old, and those millions of years are likewise derived from unverifiable assumptions and imaginative interpretations about the past. In fact, what we read in God’s Word explains what we observe in the fossil record.

The Bible also provides a logical basis for morality, as well as clear teaching that “color is superficial.” The Bible teaches that all people are of “one blood” (Acts 17:26) and equally important to their Creator. Nothing about evolutionary principles will rescue the world from destructive racism, as Leakey implies. On the contrary, evolutionist Stephen J. Gould observed, “Biological arguments for racism may have been common before 1859, but they increased by orders of magnitude following the acceptance of evolutionary theory.”3

Neither does medical progress rely on acceptance of evolution, as we discussed last week. Leakey fears dissemination of anti-evolutionary ideas will lead to the extinction of humanity, but the Bible makes clear that God created without evolution. Jesus Christ—not an evolutionary philosophy that denies Christ’s rightful position as our Creator (Colossians 1:16–17)—is the solution to the world’s problems and the deepest and most eternal needs people have.