Recently well known paleoanthropologist Richard Leakey predicted that as more evidence for evolution is uncovered, doubters will ultimately accept it. He believes that humankind will embrace evolution because people will come to see that the survival of the human race is at stake. 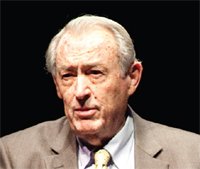 According to Richard Leakey, understanding evolution is the key to saving mankind from extinction.

Leakey, the grandson of Christian missionaries to Africa, has made it his mission to preach an evolutionary worldview. He believes that humanity’s survival is threatened from at least three directions—conflict, disease, and climate change—and that accepting evolution is the necessary first step to saving ourselves. He says, “I think we have to recognize that the future is by no means a very rosy one.”

According to Leakey, only medical research (which he insists be built upon an evolutionary foundation) and coming to terms with our common evolutionary origins can ward off extinction.

Dr. Leakey’s concern shows the religious nature of humanism and evolution. He sees humanity’s need for a savior but accepts the humanist mantra that “No deity will save us; we must save ourselves.” It is a very short step from there to say that those who deny this “reality” and instead place their hope in Jesus Christ the Creator are actually putting the whole human race at risk.