Did Humans Evolve to Drink Alcohol?

Is raising the glass in a New Year’s toast a millions-of-years-old tradition?

Celebrating the “very ancient tradition” of heavy alcohol consumption during the “holiday season,” D-brief, a blog on DiscoverMagazine.com, reports on a study claiming that the ability to metabolize ethanol (the form of alcohol in alcoholic beverages) evolved in the primate ancestors of humans to help them survive on the ethanol found in fermenting fallen fruit.

Researchers were trying to decide whether people evolved the ability to metabolize ethanol before or after they learned to distill fermented agricultural products to produce highly concentrated alcoholic beverages. To decide which evolutionary model was correct, the authors of the study in Proceedings of the National Academy of Sciences examined the various forms of the gene for the enzyme ADH4 (alcohol dehydrogenase class IV) found in animals they believe are in the human ancestral lineage.

The structure of alcohols is demonstrated by this molecular schematic of methanol (left) and ethanol (right). Note the -OH (hydroxyl) group connected to a carbon atom that is present in all forms of alcohols.

The liver is the primary organ where the molecules we consume—toxic or otherwise—are processed by enzymes. The gene ADH4 produces one of the alcohol-metabolizing enzymes in primates and people. Many enzymes are required to metabolize alcohol molecules, but the one produced by ADH4 is one of the more important ones. There are various sorts of alcohol molecules in foods that have nothing to do with inebriation and the toxic effects of ethanol on the brain and other organs.1

The enzymes produced by the forms of ADH4 found in primates metabolize the dietary alcohols found in fruits, but most do not efficiently process the fermentation product, ethanol. Some chimpanzees, gorillas, bonobos, and humans have forms of ADH4 that make an enzyme that can efficiently metabolize ethanol. Ethanol itself has toxic effects, but metabolizing it produces another toxin known as an aldehyde.2 This aldehyde causes much of the headache, nausea, and other miserable feelings often associated with indulgence in alcoholic beverages. Other enzymes are needed to eliminate the aldehyde. Even among animals and people that do have this ethanol-processing form of ADH4, some individuals lack the necessary form of the enzyme needed to metabolize the toxic aldehyde, partly explaining why some feel sicker after ingesting alcohol than others.

Tying One (Story) on to Another

The researchers firmly believe that humans evolved from primate ancestors. Therefore, they use a bit of slick circular reasoning to “prove” their claims. Substitution of only a single nucleotide in the ADH4 gene can make its enzyme product able to process large amounts of ethanol. Since orangutans do not have this form of the ADH4 gene, and gorillas, bonobos, some chimps, and most humans do, the researchers decided that the mutation that multiplied ethanol-processing efficiency must have entered the human lineage about 10 million years ago, soon after the time they believe orangutans diverged from our lineage. And because this time conveniently corresponds with roughly the time evolutionists claim much of the forested earth gave way to grasslands, they decided that our primate ancestors evolved the ability to process ethanol so that they could live on rotten fruit picked up off the ground without getting sick when they came down from the trees and started walking around. Thus, they are confident that our human ancestors were all set to handle the metabolic challenge of concentrated alcoholic drinks when they learned how to make them. 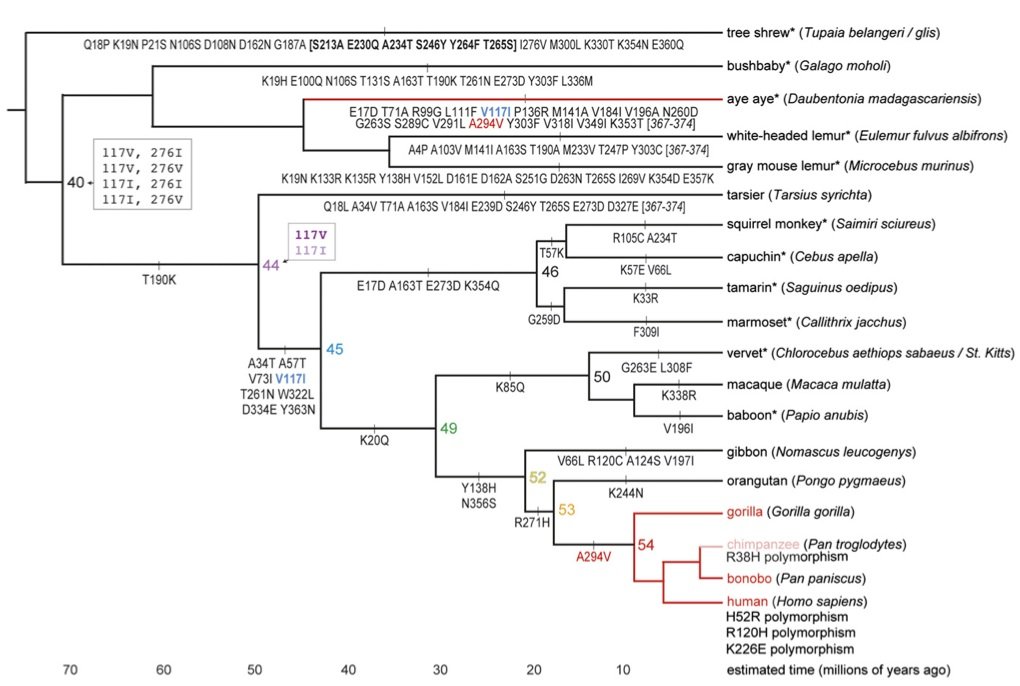 Of course, the very idea that any animal can acquire the genetic information to become a different kind of animal or a human is unsupported by biological observations. The millions of years assigned to the fossil record and to the supposed divergence of primates are based on unverifiable worldview-based assumptions. The family tree of primates is largely constructed on the basis of similarities and differences fully explained as the products of common designs created by God, the Common Designer of all the kinds of animals included on the chart. From the Bible, we know that God created all kinds of land animals on the same day He created Adam and Eve, about 6,000 years ago. Scientific observations confirm that animals and humans only vary and reproduce within their created kinds.

Variations in human ADH4 and the many other genes needed to efficiently remove ethanol from the body typically result from simple mutations in the human genome—accounting in part for the wide variation in the human ability to metabolize ethanol. However, there is no reason to assume that the differences between the genes of an orangutan and a human are the result of mutation from a common ancestor. God endowed each kind of animal as well as humans with the abilities needed to function well in the world He created and even to cope with many of the changes that came into the world after the curse of sin entered it. God would have thus made it possible for both animals and humans to produce the enzymes needed to metabolize the ordinary dietary alcohols in certain foods.

Human individuals and ethnic groups vary greatly in their ability to metabolize ethanol and its toxic aldehyde byproduct. There is no need to resort to evolutionary stories to explain these variations. Mutations in the human ADH4 gene and other important genes in this process are very common and often result in variations in enzyme efficiency. This is not a case of evolving a new function but only variation in the range and quality of an existing gene’s product.

There is no need to resort to evolutionary stories to explain these variations.

Not only is the ability to metabolize ethanol not an example of evolutionary progress as the D-brief article implies, but we do not need evolutionary ideas to know that humans have a long history of excessive alcohol consumption. Contrary to the suggestion of the researchers in the PNAS study, the diseases associated with alcohol consumption are not the result of being insufficiently evolved but insufficiently righteous. All of us are sinners (Romans 3:23), and the diseases as well as the other tragic results of alcohol abuse are symptoms of sin’s curse on this world.

The Real History of Alcohol Abuse

The abuse of ethanol has throughout history been associated with sinful behavior and devastating consequences in this sin-cursed world. The Bible records that Noah, sometime after the Flood, became drunk and passed out from drinking wine, leading to embarrassment, disgrace, and family discord (Genesis 9:20–24). Throughout the Bible, drunkenness is condemned as a mark of foolishness. For instance, Hosea 4:11 (ESV) says, “Whoredom, wine, and new wine . . . take away the understanding.” Isaiah 5:11–12 adds the warning of spiritual danger, for those who “follow intoxicating drink . . . do not regard the work of the Lord, nor consider the operation of His hands.” And Ephesians 5:18 exhorts Christians to be controlled by the Spirit of God and not alcohol: “And do not be drunk with wine, in which is dissipation; but be filled with the Spirit.”

Society today is besotted by the burdens of alcoholism: the destructive power on families and individuals, the diseases that destroy and kill so many, the lives that are wrecked by addiction, the dangerous or abusive behavior that erupts in so many people under its influence, and the countless deaths caused by people driving under the influence of alcohol.

The Christmas season is a time in which we should be remembering the coming to Earth of the hope and salvation of mankind in the person of Jesus Christ. But how many fatalities will be caused by people who celebrate the wrong reason for the season with alcohol and then fool themselves into thinking they are competent to drive? The Bible is so correct when it says in Proverbs 20:1, “Wine is a mocker, strong drink is a brawler, and whoever is led astray by it is not wise,” for such consumption shows how foolish people are. For Discover magazine—even in a blog—to celebrate the fact that “the holidays are packed with opportunities to raise a glass of our favorite boozy beverages” is an evolutionary benefit, adding “this holiday season we’ll be partaking in a very ancient tradition indeed,”3 is not only incorrect but also irresponsible.