The appendix has long been maligned as an obsolete vestigial remnant of digestive evolution. Is it really as worthless as people say, or does it have a purpose after all?

For many years, the primary function of the appendix seemed to be to give surgeons a little something extra to do whenever they visited a patient’s abdomen. After all, it could get infected later and was thought to be useless, so why not get rid of it? Now, evolutionary analysis has finally caught up with the medical evidence that the modern appendix is functional and has now bestowed its blessing. Evolutionary biologist Heather Smith and surgeon William Parker presume to have elucidated the evolutionary history of the appendix and discovered “the strongest evidence yet that the appendix serves a purpose.”

Despite a century of evidence that suggested the appendix had some sort of immunological function, Darwin’s dictates ruled.

Despite a century of evidence that suggested the appendix had some sort of immunological function, Darwin’s dictates ruled. Pathologists certainly had ample opportunity to study normal appendices, and they found they contained lymphatic tissue suggesting the normal appendix was designed to do a job. Yet Darwin, deluded by his day’s incomplete anatomic knowledge into thinking that only humans and great apes possessed appendices, hypothesized that the ancestral primate had evolved a large cecum to digest a tough leafy diet. He believed that its cecum eventually shriveled to a functionless appendix as dietary demands eased. And if Darwin said the appendix had no function, it was easy for many to ignore evidence to the contrary. 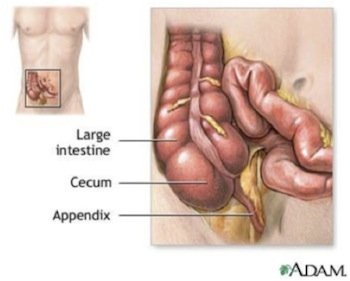 The appendix is located at the juncture of the small intestine and the first part of the large intestine, called the cecum. Despite the common assertion that the appendix is a useless evolutionary vestige, comparative primate anatomy cannot trace its supposed origin. And despite the fact that we can live without it, it actually serves important functions in the immune system. Image credit: University of Maryland Medical Center www.umm.edu

As with many other mystery organs relegated to the vestigial evolutionary waste bin—metaphorically if not literally, since fortunately most are not so exposed for easy excision—the appendix eventually began to be rehabilitated as medical science found it impossible to ignore additional evidence of its important roles both before and after birth.1 To rectify this Darwinian dilemma, Parker’s team compiled data on the diets of 361 living mammals of whom they credit 50 with having an appendix. (German evolutionary biologist Olaf Bininda-Emonds points out that not all 50 are confirmed, but some are.) When analyzed in light of the mammalian evolutionary tree, they found the evolutionary history of the appendix failed to follow any particular pattern. Thus they conclude it evolved independently 32 to 38 times. Because it evolved so often, it must have been useful, right?

Parker himself has been one of the many researchers to be involved in actual experimental research elucidating the functions of the appendix. He and his colleagues have suggested the appendix provides a “safe house” for beneficial gut bacteria to shelter when dangerous pathogens temporarily out-compete them. That is real experimental science. That is real evidence for God’s good and purposeful design. And it needs no evolutionary confirmation or explanation.

The evolutionary “evidence” Parker and colleagues offer here is based purely on the presumption that mammals share common ancestry. And why? Not on the basis of any scientifically observable support—evolution of one kind of animal into an different, more complex kind has never been observed—but rather on the mere determination to explain biodiversity through naturalistic processes. The Bible provides God’s account of the origins of all kinds of animals (and plants and humans) in the first chapter of Genesis. God created many kinds and designed them to reproduce after their kinds. This is exactly what we see in biology, as organisms vary within their kinds but do not become new kinds of organisms.

Thus, the many unconnected and unexplained appearances of the appendix in the mammalian evolutionary tree merely serve as further confirmation that the tree is invalid. And they do not contribute one whit to actual medical science.