Photo by Janko Ferlič, via Unsplash.

Was a Baby Born with a Human Tail?

Baby recently born in Brazil with “human tail with a ball at the end of it” though it is far from evidence of human evolution or a vestigial organ. 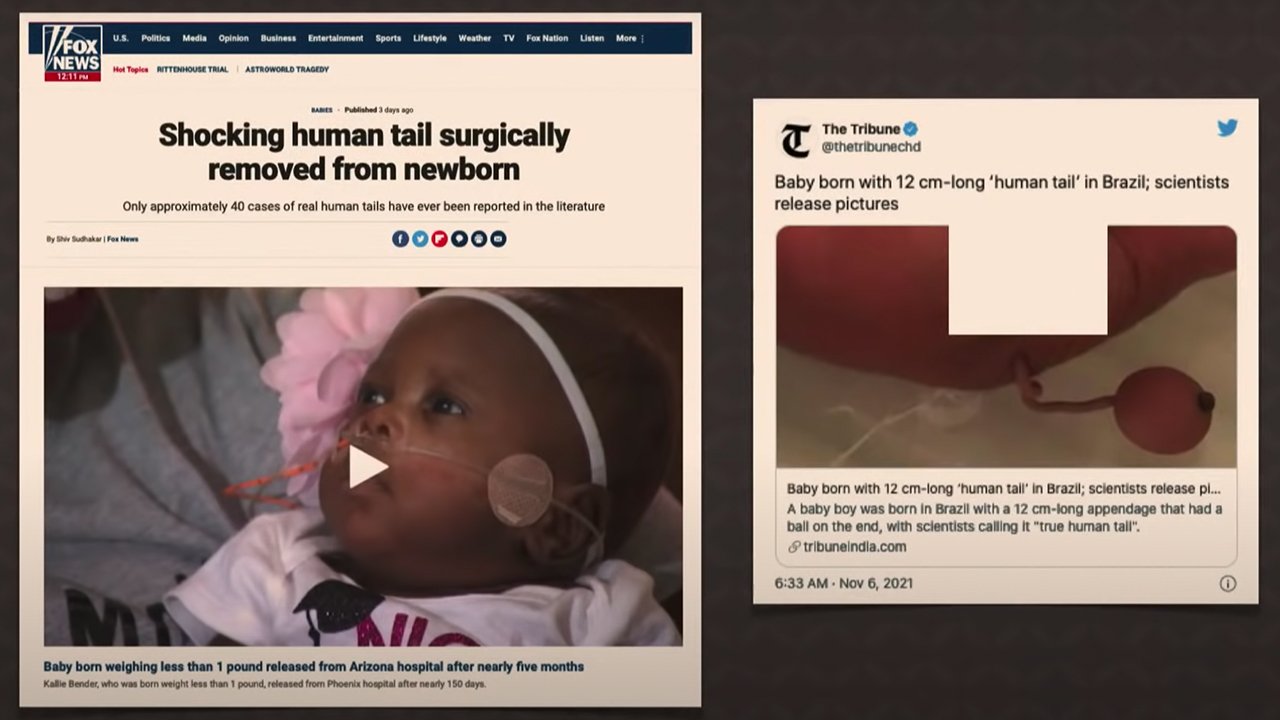 “Shocking human tail surgically removed from newborn,” the headlines proclaimed. According to news reports, a baby boy was recently born in Brazil with a “human tail with a ball at the end of it.” The report even went so far as to call this a “real human tail”—but is that what it really is?

Well, the article states (note how evolutionary the terminology sounds—really, what they call a “tail” isn’t a tail at all but the critically important coccyx where the muscles will attach later in development):

Around the fourth week of gestation, most of us start to grow a tail while in the womb, but it usually disappears by the eighth week, eventually morphing into the tailbone, otherwise known as the coccyx.

The article later explains that scientists classify these “tails” as “true human tails” or “pseudo-tails,” depending on what composes the “tail.” And, of course, at the end of the article, it links back to our supposed evolutionary history,

It is thought our ancestors originally had some form of a tail, but we evolved as a species over time without the need for the organ, so we no longer grow them.

This has nothing to do with evolution—it’s never going to develop into an actual tail.

But what’s really going on here? As an unborn child develops in his or her mother’s womb, the end of the spine sticks out noticeably early in development. This has nothing to do with evolution—it’s never going to develop into an actual tail. Rather, the supposed “tail-like” appearance is because the muscles and limbs have yet to develop. Once they do, they surround the coccyx, and it ends up inside the child’s body.

Now, sometimes in our fallen world, the embryo doesn’t develop normally, and complications result . . . or the baby is born with an abnormality, such as the so-called “tail” this baby in Brazil was born with. But it doesn’t have any of the features of a real tail, and it’s not some evolutionary leftover. It’s an abnormality in embryonic development (as a result of our groaning world because of our sin, according to Romans 8:22).

The “human tail” is just one example of what evolutionists call a “vestigial organ.” As the name suggests, these organs are supposed to represent useless remnants of what were once functional and useful organs in our primitive ancestors. As recently as 1971, the Encyclopedia Britannica claimed that there were more than 100 vestigial organs in man. Even critically important organs such as the thymus and parathyroid glands were once considered to be vestigial simply because their functions were not understood. As biomedical science has progressed, there are fewer and fewer claims of function-less organs. Despite their diminishing numbers, vestigial organs are still mentioned in textbooks as one of the strongest evidences for evolution and against intelligent design by a Creator.

Such sensational headlines are intended to reinforce evolutionary ideas and shock people.

Such sensational headlines are intended to reinforce evolutionary ideas and shock people. But, when we understand such incidents biblically, we know this is just a consequence of living in a fallen world and has nothing to do with supposed evolution.

This item was discussed yesterday on Answers News with cohosts Patricia Engler, Dr. Jennifer Rivera, and Bryan Osborne. Answers News is our twice-weekly news program filmed live before a studio audience and broadcast on my Facebook page and the Answers in Genesis Facebook page. We also covered the following intriguing topics:

Watch the entire episode of Answers News for November 17, 2021.