Federal Government: Freedom to Conform, Not Be Different

The plight of a German family that fled to the United States for political asylum reveals threats to the freedom of all Americans. Many non-homeschooling Americans may think the U.S. government’s effort to revoke the homeschooling family’s political asylum has nothing to do with them. However, a close look at the U.S. Attorney General’s case before the Sixth Circuit Court of Appeals reveals several startling and disturbing positions that affect everyone’s freedom. 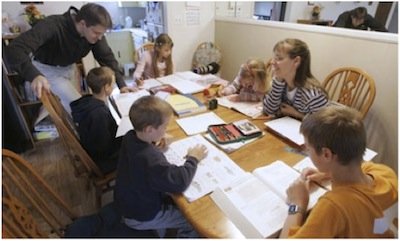 Uwe and Hannelore Romeike and their five children fled German persecution for homeschooling their children and were granted asylum in the United States. Now the U.S. government is threatening to send them back where they may face fines, imprisonment, and loss of child custody. All Americans should be concerned. Why? The U.S. Attorney General’s arguments, by implication, (1) deny the fundamental liberty of parents to direct the education and upbringing of their children; (2) deny that a right is being violated so long as the right is denied to everyone; (3) deny that religious liberty is an individual’s right; and (4) deny that persecution for a belief is genuine persecution because the problem would be solved if the “persecuted” person just changed his mind. According to HSLDA’s Michael Farris, Americans should stand up for the Romeike’s right to asylum, for in so doing we will be standing up for our own. Image credit: Wade Payne/AP through www.guardian.co.uk

Homeschooling is against the law in Germany. The German government wishes to “counteract the development of religious and philosophically motivated parallel societies.” It is astonishing that Germany—a country that has suffered so much in the past century under Nazi and East German Communist totalitarian regimes that viewed children’s philosophical training to be under state control—would ban homeschooling on this ground, essentially mandating social homogeneity, discouraging individuality, and overriding parental authority. Nevertheless, German parents wishing to homeschool face fines and imprisonment. In 2007 Germany’s Federal Supreme Court ruled that parents could even lose custody for homeschooling their children.1 The Romeikes, having already accumulated fines and watched their children marched off to school by the police, fled in 2008 to “the land of the free and the home of the brave”—the United States.

U.S. law grants permanent political asylum if refugees can show they have been persecuted for religious reasons or for being part of a “particular social group.” The Romeikes were granted political asylum by a Tennessee immigration judge. Unfortunately for the family, U.S. Immigration and Customs Enforcement appealed the ruling. Now the Home School Legal Defense Association (HSLDA) has appealed their case to the Sixth Circuit Court of Appeals, the federal court just below the Supreme Court.

The U.S. Attorney General’s arguments should raise red flags not only for people concerned about the Romeikes and others who may seek asylum in their footsteps, and not only for homeschooling families, but for all Americans.

Describing Germany, HSLDA Director of International Relations Michael Donnelly says, “It’s a democracy. They respect human rights. But in this area, it’s frightening how they treat people who want to do something very simple. There are 2 million children homeschooled in the U.S. . . . This is not a threat to the German state, but they are treating it that way, and it’s wrong.”2

The U.S. Attorney General’s arguments should raise red flags not only for people concerned about the Romeikes and others who may seek asylum in their footsteps, and not only for homeschooling families, but for all Americans. If you value your freedom to raise your children as you choose, or even just your freedom as an individual free to think and believe as you will, then you need to be aware of the U.S. government’s contentions in this case.

Homeschooling is legal in all of the United States with varying degrees of regulation in each state. Laws regulating homeschooling vary a great deal. Some states make periodic efforts to usurp parental control of the education process. These range from raising the compulsory attendance age to a very concerning law currently under consideration in Connecticut that would require children undergo periodic “behavioral health assessment.”3

The United States Supreme Court affirmed “the liberty of parents and guardians to direct the upbringing and education of children under their control” way back in 1925 in the case of Pierce v. Society of Sisters.4 The high court ruled that this right was guaranteed under the Due Process clause of the 14th Amendment, which was ratified in 1868. The Due Process clause guarantees:

No State shall make or enforce any law which shall abridge the privileges or immunities of citizens of the United Sates; nor shall any State deprive any person of life, liberty, or property, without due process of law; nor deny to any person within its jurisdiction the equal protection of the laws.

In addition, the U.S. Supreme Court in Meyer v. Nebraska (1923) ruled that a parent has a fundamental right to “establish a home and bring up children” and the right to “worship God according to the dictates of his own conscience.”5 And in Wisconsin v. Yoder (1972), the court supported the rights of parents to keep their children out of public schools for religious reasons.6 Clearly, our highest court has affirmed that liberty to direct the upbringing of one’s children is a fundamental right.

The U.S. Attorney General’s office, however, now argues that Germany is not violating anyone’s rights so long as no one is allowed to homeschool. In other words, if nobody in the country is allowed a particular freedom, then no one’s rights are being violated. Taken to its logical conclusion, this statement alone should keep all of us awake at night.

As HSLDA chairman, attorney Michael Farris, points out, our constitutional rights consist of “fundamental rights” and “equal protection.” The U.S. Attorney General’s office is implying that there is no fundamental liberty to homeschool and that therefore if no one is allowed to homeschool then no one’s rights are being violated. In light of previous court decisions affirming the liberty of a parent to direct the upbringing of their children, this argument is most disturbing.

The U.S. government’s argument further stipulated that the Romeikes were not suffering from religious persecution because not all homeschoolers were religious and not all Christians wished to homeschool. Thus, the U.S. Attorney General’s office seems to think that religious freedom is only the freedom to believe like others of the same religious group. But religious freedom is a right guaranteed by the First Amendment to every individual. It is not just the right to pick a church and march lock-step with its members.

Finally, the U.S. government is arguing that the Romeikes are not being persecuted for being part of a “particular social group” because they could change. If only they didn’t want to homeschool, they wouldn’t be part of that group. Therefore, our government claims their rights are not being violated.

While you read what the government has written in its case against the Romeikes, remember the immortal words of German pastor Martin Niemöller:

And if you see your own freedoms in peril, then you probably are seeing the situation pretty clearly. Michael Farris says, “It is important that Americans stand up for the rights of German homeschooling families. In so doing, we stand up for our own.”

As the case is currently in the hands of the justice system, there is not at present a channel to receive public input. HSLDA is representing the Romeike case and monitoring these threats to our freedom. Their website offers the opportunity to keep informed. It may be that our federal lawmakers, as they consider reform of immigration laws, could, if encouraged by their constituents, include provisions to deal with others who may wish to seek freedom here to parent their children as they see fit. As to the justice department’s implicit threats to the freedoms of all, we must remain vigilant and watch for opportunity to make our voices heard.