What happens when you combine translations of creationist materials, university students, and an open door to a former Communist country? Lives are often changed for eternity. That’s what Dr. Werner Gitt, a creation scientist, found last year in Kazakhstan after being invited to speak in churches, universities, and medical institutes. 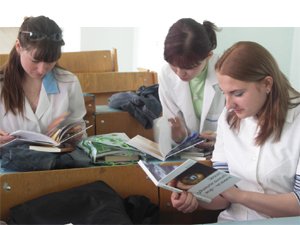 Creation scientist Dr. Werner Gitt found an open door to share the gospel through translated materials as he spoke to medical students in Kazakhstan.

Werner found more freedom to talk about creation and present the gospel in this mostly Muslim country than in the countries of Western Europe. Many of the Russian-speaking people wanted to know the differences between the Koran and the Bible. Despite finding many who disagreed with his message, Werner says that no one condemned what he said. In fact, dozens committed their lives to Christ after hearing the truths about creation and the gospel.

Within minutes of ending his presentations, the university students quickly snatched up the free materials. In all, he distributed 6,500 free books and 15,000 copies of the tract, How Can I Get to Heaven? To his surprise, Werner discovered that his book, The Wonder of Man, is used as a textbook at one of the universities where he spoke. And when he walked into the library at another university, he was amazed to see all of his books, even the tract on heaven, available in Russian.