Answers in Genesis is excited to hear how the Lord is raising up people all around the world, including Peru, to proclaim the message that God’s Word is true from the beginning. 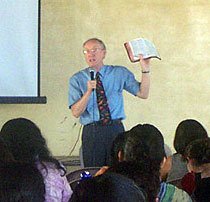 Bob Relyea, a missionary to Peru, shares the creation message.

Answers in Genesis is excited to hear how the Lord is raising up people all around the world to proclaim the message that God’s Word is true from the beginning. One such couple is Bob and Frances Relyea, missionaries to Central and South America.

Bob and Frances Relyea are with “Proclaim International” (based on Boca Ratón, Florida) and are residing in the Peruvian capital city, Lima.

Originally from the US, Bob met his future wife, Frances in Peru during the late 1960s while he was working with the Peace Corps, and she was the daughter of missionaries from England involved in distributing Christian literature. They moved to the US after the birth of their first son, then later emigrated to Australia, where Bob taught math and science in public and Christian schools over the next 25 years. Left with an “empty nest” in 1994 after the last of their five children moved away, Bob and Frances began asking the Lord for direction.

“The Lord made it clear that He wanted us to return to Peru and resume our ministry (in Christian Education and Creation Science) there. So, in February, 1998, after 27 years absence, we arrived at the shores of Peru again and began our ministry. During the short time that we have been back, the Lord has helped us to quickly regain competence in the Spanish language and has opened many doors of service in Bolivia, Peru, Ecuador, Central America and also in Hispanic churches in Boca Ratón, Florida.”

Bob’s interest in the creation message began in the late 60s, when he began speaking in Peru on the topic:

“The Lord had started to speak to me along these areas way back then, although my knowledge was very meager. I started to be in contact with present-day creationists back in 1979/1980 when I attended Light Educational Ministries seminars in the Adelaide Hills of South Australia. It was during these seminars that I heard Dr Carl Wieland speak on creation topics. I started to read all the creationist material that I could get my hands on and at one stage owned a copy of every Ex Nihilo magazine [now called Creation] back to the beginning [1978]. My exposure and interest in creationism increased over the years as I read, ministered, attended seminars and taught in Christian schools. I had a reputation in my last school in Australia (Toongabbie Baptist Christian School) as being ‘Mr Creationist," as my lessons had a solid creationist/biblical foundation.”

Bob and Frances understand the need for undercutting the evolutionary teachings so prominent in today’s society so that the way is then paved to share the gospel message:

“Especially in the large cities such as Lima (8,000,000+ people), the humanists pretty much have ‘full reign,’ as there are few people seriously challenging the evolutionary model. I have even seen evolution being taught in Christian schools as fact! A lot of people do not want to listen to a gospel message today because they think that ‘science’ has proved the Bible to be wrong and do not want to take it any further. They will, however, listen to a message on dinosaurs or the geological evidence for Noah’s Flood, where you can show that the creationist model is superior to the evolutionary model. From there they start to become interested in the rest of the biblical message and many find Christ as their Saviour. So, the creationist message is not only important in this day and age, but absolutely essential to the proclamation of the gospel.”

In addition to teaching math and science at a Christian school, Bob also speaks at “One Day Enablers” conferences (sponsored by the Association for Christian Schools International, ACSI) on creation topics, and represents Light Educational Ministries (based in Australia), an organization that renders support for those in Christian education and home schooling.

In January, Bob spoke at “One Day Enablers” conferences in 8 different cities throughout Guatemala, Honduras, and El Salvador, on topics ranging from the importance of the creation/evolution issue to “How to use creationism in the classroom.” Bob said,

“The response of the participants was very encouraging. The total attendance was about 1500, with groups ranging in size from 56 to 520. The organizers of the “One Day Enablers” commented that these were the first conferences that they had organized over the past 10 years where practically everybody stayed in their seats listening until the presentation was over!

“People in Latin America are hungry for the truth of God’s Word where they are getting answers for questions that have troubled them for years. Many churches in the various cities have asked for a return visit so that the creationist topics presented can be amplified and, with prior preparations, presented to a wider audience.”

Bob was able to share the web address for AiG’s Spanish website with the participants, as well as distribute approximately 40 kg (88 lbs) of Spanish materials, furthering the message that God’s Word is authoritative and can be trusted.

[Because of AiG's special emphasis on reaching Spanish-speaking people groups, we continue to look for ways to minister to these people groups by producing quality materials in their language. AiG has also recently added a full-time presenter, whose native language is Spanish, to help reach those who speak this language. He will also help translate the Answers with Ken Ham radio programs, and articles for our Spanish website.]

AiG is looking forward to continuing to work with, and provide resources for, Bob and Frances as they strive to teach those in their area how to defend and uphold the Christian faith, beginning with Genesis.