I love chickens. My wife loves chickens. (Well, sort of.) We own seven of them, and my children love collecting the beautiful brown, white, and yes, even green eggs every morning for breakfast. In fact, we thank God for chickens and are all proud members of PETA (People for the Eating of Tasty Animals).

Have you ever stopped to consider that there’s more to an egg than how good it tastes? It’s like a little space capsule. Inside the capsule, two lifelines tether a tiny astronaut (the chick) to the food supply (the yellow part called the yolk) and the outside oxygen source.

10,000 tiny holes in the capsule’s shell allow oxygen to come in and carbon dioxide wastes to go out. The shell is also coated with something called “bloom,” which keeps dust out of the holes and fights bacteria.

As he grows, the astronaut is strapped safely into the center of the capsule by two strong bungee cords attached to opposite ends of the shell. He is further protected by a dense, shock-absorbing liquid (the “white” of the egg) filled with protein and a powerful enzyme called lysozyme.

Also found in human tears, this enzyme kills bacteria on contact. This germ-buster explains why our eyes don’t become infected, even though they are constantly exposed to bacteria.

A few days before the astronaut emerges from the capsule, a special tool grows on the tip of his beak called an “egg tooth.” He first uses this tool to open a special air sac in the capsule, which gives him six hours of oxygen, which he desperately needs before breaking out. Fueled with this oxygen, the little fellow uses his egg tooth to crack the shell of the capsule and spring forth into a new world. 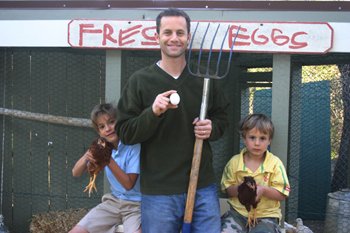 The day before he hatches, he swallows the entire food pack (the yolk), giving him three days of food and water before he gets on his feet and finds nourishment on his own. Clearly, the egg is a marvel, designed by a creative genius.

So the next time you hold an egg in your hand, remember the wonders of the God who made it. Then, break out of your shell and share your faith with an unsaved friend. Don’t be a chicken.

Just open the fridge and say to your friend, “Hey . . . have you ever seen a miniature space capsule?” Then let him hold the egg, as you share with him what you’ve learned. Use the egg as a springboard to talk about the genius of our wonderful Creator, and show your friend how to know Him through faith in Jesus Christ.

Kirk Cameron, husband and father of six, is best known for his roles in the TV series hit Growing Pains and in the Left Behind movie series. Kirk also played in the popular film Fireproof from Sherwood Pictures, released in 2008.