The Sound of a Transformed Life

Famed Mexican rapper Fermin IV Cabellero Elizondo is now a pastor who shares the good news about the saving Creator through his music and preaching.

Back in the 1990s, everyone in Mexico knew Fermin IV Caballero Elizondo. He is the founding member of Control Machete, Mexico’s first hip-hop group of all time. That all changed in 1997, when he encountered the truth of God’s Word. Now he spends his days preaching the gospel, including its foundations in Genesis.

What caused the change?

From Rap to Riches

“I was born as a Catholic in Mexico, and I was taught a lot of things in my religion. When I met my future wife, she gave me a Bible, and I started reading it.”

As he read the Bible, Fermin learned about the love of God. “I couldn’t believe he loved me so much that he sent his Son to die on a cross just for me.” He kept seeing evidence of God’s mercy from the beginning to the end.

Prior to reading the Bible, Fermin simply thought God was angry with him because of how he was currently living his life, but he didn’t know more. Though he was a well-known artist with several hit songs on the radio, that didn’t bring deep satisfaction. He went to church four times with his Christian girlfriend who wouldn’t stop inviting him.

One Sunday as Fermin sat in a pew, a man shared how the Lord drastically changed his life.

“I thought, That could be me. I received the Lord that day. Before then I had everything I wanted, including fame and a lot of money, but I was empty. When I heard about God and how he loved me, I accepted it.”

Even though he believed in God, Fermin kept living life for fame and gain, not realizing how much God intended to change his life. Giving up drugs especially seemed impossible. But after asking God to help him almost daily, he was able to break his habit.

“When I saw Jesus could take away my need for drugs, I wondered what else he could do for me. I started going to church and learning more about the Bible.”

After his transformation, Fermin’s music changed. His first new song was titled “A New Life.”

“Before writing the song, I went through the Bible about a new life and Christ and wrote new song lyrics. I didn’t change to Christian rap. Instead, I changed my lifestyle. I was transformed and given a new life in Christ so everything that started coming out was for the Lord.”

Fermin doesn’t want to give up his old association with music because God is using it to help him proclaim the gospel in the streets of Mexico.

“Since people knew me from my music, it was and has always been very easy to start up conversations with them about the Bible. Usually, they’re caught off guard when I start asking them if they believe in God. But then they will engage, and several people have come to know the Lord because of street evangelism.”

Twelve years ago, Fermin became a pastor at the church where he was leading worship.

“Once I became a pastor, it was hard for me to do both outreaches and preaching. But it was interesting because a lot of people who knew me before started looking for my music on YouTube and found my messages at the church.”

Many people came to Fermin’s church from watching those YouTube videos.

“God has used the nostalgia of people trying to find music from their teen years to bring many people to my church. Now they know the Lord because the teaching of the Bible and the preaching of the gospel.” 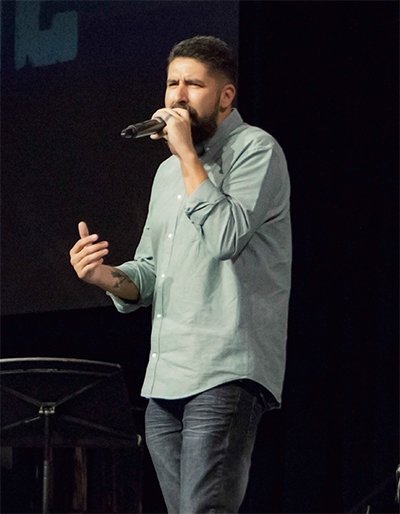 Photo courtesy of The Riot and the Dance

In 2017, Fermin delivered his testimony to over 2,500 Spanish-speaking people at the Creation Museum’s Dia Latino event.

Starting at the Right Place

The gospel is much more than four books in the Bible. Fermin’s church is dedicated to preaching the Bible from the very first word in Genesis, showing how God reveals his plan that you can only understand properly if you start at the beginning. Since he became a pastor, his church has planted five other churches and plans to start up three more next year. All will integrate Genesis into their basic emphasis.

“My first ministry is the teaching of the Word, so I’m the teacher of Genesis. I see how the history of the Bible touches people’s lives. As a teaching pastor, I lead my church through the Bible verse by verse from Genesis to Revelation, and I always finish with the gospel.”

Fermin doesn’t keep the truth solely in Mexico. In September 2017, he traveled to Northern Kentucky to speak at Dia Latino, a Spanish conference hosted by the Creation Museum.

“I stand here today finding it hard to believe that my life was once all about me. Now, I want to proclaim the gospel and the message of Genesis wherever I go.”

In front of a crowd of more than 2,500 people, Fermin shared how his life has transformed. “I stand here today finding it hard to believe that my life was once all about me. Now, I want to proclaim the gospel and the message of Genesis wherever I go. The same can happen to you.”

As Fermin looks back at the transformation in his life, he often can’t believe that it’s been 17 years since he came to know the Lord.

“I have seen a lot of things through the years. But this season in my life has been the most memorable. Every day I get to meet people that I knew from before and meet new people in the music business and tell them about what God has done for me. Right now, I am praying the Lord would use my new album Laberinto to reach more people for him. After all, that’s what it’s all about.”