Near the beginning, there was life . . . say scientists analyzing carbon in a zircon crystal . . . .

Zircon crystals—little time capsules preserving bits of Earth’s ancient past—have in our recent past given evolutionary scientists a whole new view of conditions on the early Earth. Previously thought to have been a Hadean hell of molten magma for a very long time, the early Earth is now seen in the light of zircon-trapped atoms as a place that cooled enough for water to condense within 160 million years of being spit out of a solar nebula and coalescing as a fiery ball. Now the discovery of flecks of graphite in an Australian zircon crystal has raised the possibility that life evolved very quickly in that ancient world, 300 million years earlier than previously thought.

Carbon is contained in all living things and of course in inorganic molecules like carbon dioxide. Graphite is a form of pure carbon that forms under hot conditions. Graphite in rock dated as old as 3.8 billion years has previously been taken as the earliest physical residue of life on Earth. Like the latest graphite-in-zircon discovery reported in Proceedings of the National Academy of Sciences, the proportion of carbon isotopes found in that graphite from Greenland was consistent with biogenic carbon—carbon produced by a living organism through a process like photosynthesis.

“Twenty years ago, this would have been heretical; finding evidence of life 3.8 billion years ago was shocking,” explains UCLA geochemist and study coauthor Mark Harrison. “Life on Earth may have started almost instantaneously,” he adds. “With the right ingredients, life seems to form very quickly.”1

Of course, secular scientists, who reject the history recorded in God’s Word, believe the early Earth, spawned by a solar nebula about 4.54 billion years ago, endured a catastrophically destructive “Late Heavy Bombardment” of the inner solar system about 3.9 billion years ago. Therefore, if evolutionary scientists believe the reported Jack Hills zircon crystal is really 4.1 billion years old and really does harbor bits of biogenic carbon, then they have to assume that such newly evolved life was sufficiently tenacious to survive. Perhaps it lurked beneath the surface as some have suggested.2 Or perhaps conditions on the early Earth weren’t so bad after all. Harrison opts for the latter. “The early Earth certainly wasn’t a hellish, dry, boiling planet; we see absolutely no evidence for that. The planet was probably much more like it is today than previously thought,” he says. “We need to think differently about the early Earth.”3 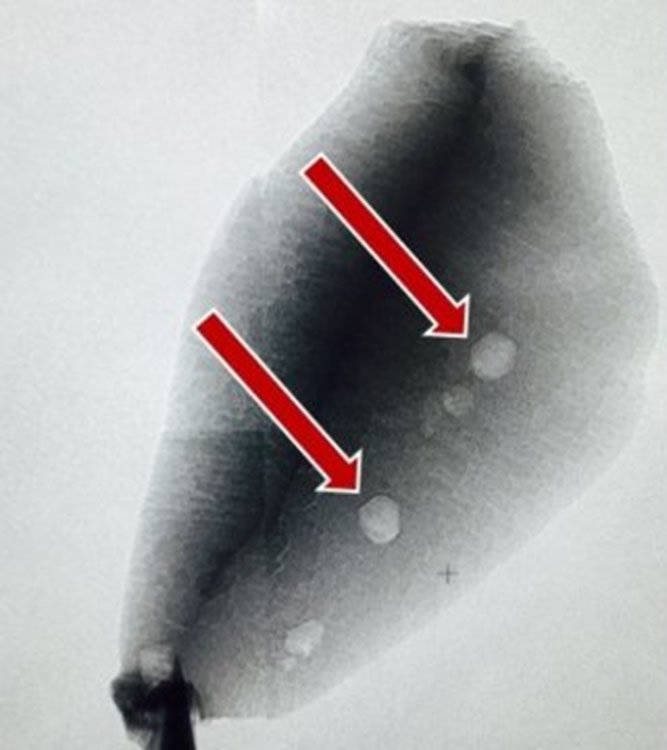 These two flecks of graphite in a tiny zircon grain from Jack Hills in Western Australia may contain carbon of biogenic origin. They are very small, as the zircon in which they are preserved measures only 0.03 x 0.06 x 0.02 mm. Evolutionary scientists date this zircon at 4.1 billion years and think the carbon is a chemical footprint of some of the earliest life forms to have evolved on Earth. Image by Stanford/UCLA, reproduced from Science Daily.

Zircons—crystals of zirconium silicate that form in hot magma—are largely impervious to environmental conditions that radically change most rocks. Therefore, they are thought to preserve unaltered evidence of the world in which they formed. A vast quantity of unverifiable worldview-based assumptions attend the dating of zircon crystals as well the interpretations of the conditions under which they form. (We have reviewed these extensively in numerous articles, including “Rocks Around the Clock: Do Zircons Contain Reliable Time Stamps and Early Earth’s Secrets?” and “No Hadean Hell on Earth.”)

Among a cache of over 10,000 zircons recovered from the metamorphosed conglomerate in the Jack Hills region of Western Australia, a team of scientists found 656 containing dark specks that could be graphite. They analyzed 79 of them and confirmed that one of them contained graphite. They are confident that the two bits of graphite in the crystal are even older than the zircon grain preserving them, which they believe to be 4.1 billion years old based on uranium-lead dating. (See “Radiometric Dating: Problems with the Assumptions” to explore the unverifiable assumptions associated with this dating method.) Because the zircon crystal was not cracked, they do not believe it possible that the carbon in it is a contaminant. Therefore, they believe they have found the earliest chemical trace of life on Earth.

Most carbon is carbon-12. A tiny amount is carbon-13, a non-radioactive isotope having one extra neutron per atom. The ratio of carbon isotopes in the graphite the team found is consistent with the isotope ratio found in photosynthetic products. Photosynthetic organisms build sugar molecules with a lower proportion of carbon-13 than the roughly 1% found in the carbon dioxide they utilize. The first enzymatically controlled step of photosynthesis typically discriminates against carbon dioxide containing carbon-13.4

Therefore, if the graphite is really of biogenic origin, and if the zircon containing it is really 4.1 billion years old, then life existed on Earth 4.1 billion years ago. Of course, those are pretty big ifs! The idea that the zircon encasing the graphite is 4.1 billion years old is based entirely on worldview-based interpretation of radiometric data. And scientists with a biblical worldview—a worldview that accepts God’s eyewitness account of our history as recorded in the Bible—would interpret the same data in an entirely different way. (See “Rocks Around the Clock: Do Zircons Contain Reliable Time Stamps and Early Earth’s Secrets?,” “#6 Helium in Radioactive Rocks,” and the Geologic Time Scale to understand more about how a biblically consistent interpretation fits the scientific data.) No scientist was around at the time of Earth’s origins, so each must interpret data related to our origins in accord with the historical account he or she considers the most reliable—one imagined by fallible man, or one provided by the infallible Creator.

Furthermore, the scientific data concerning the assortment of Jack Hills zircon crystals (aka zircon grains) should open an investigator’s eyes to the inconsistency of the methods used to date them. Answers in Genesis geologist Dr. Andrew Snelling describes this medley of ages:

What they don’t mention in this study is that in an earlier study more than 100,000 zircon grains were analyzed to find the oldest grains, and only ~7% yielded Pb-Pb ages older than 3.8 Byr. Thus, most zircon grains in this metamorphosed conglomerate at Jack Hills yield Pb-Pb ages of <3.8 Byr. Furthermore, a few grains only yield U-Pb of 400–800 Myr (million years), and many grains yield discordant ages, meaning that their U-Pb and Pb-Pb ages do not agree. This reveals the assumption-laden nature of radioisotope dating.

Indeed, the Pb-Pb ages are “model ages,” that is, they are calculated based on an assumed model for the history of U-Pb decay from the Earth’s origin through its subsequent history. The preferred model of Earth’s origins assumes the sun existed before the Earth, which then condensed from the solar nebula about 4.6 billion years ago. A constant decay rate at today’s measured slow decay rate is assumed, as well as a constant 238U/235U ratio, even though we now know this critical 238U/235U ratio has varied because we now find different values for the ratio in different earth minerals and meteorites.

You can read more about the rather creative way in which the 4.54 billion year supposed “true age of the earth”5 was determined in our discussion of Neil DeGrasse Tyson’s Cosmos program that recounts the story in “Cosmos Review: ‘The Clean Room.’”

The graphite might or might not be of biogenic origin. The researchers themselves note that fact and consider other possibilities, though they lean strongly toward the “life” option. They hope their conclusion will be verified by more discoveries, though their discovery on only one bit of potentially biogenic carbon in 10,000 zircons suggests the ongoing search for more needles in this haystack will be a project to keep laboratory assistants and students busy for some time to come.

While the carbon isotope ratio in the zircon grain described in the study is consistent with biogenic carbon, Dr. Snelling points out that metamorphic rock like the Jack Hills meta-conglomerate forms under extreme temperatures and pressures. Under those conditions, the atoms in zircon grains can move! Therefore, it is entirely plausible that carbon atom mobility could have affected the ratio.

Biogenic or Not, It Isn’t Evolutionary!

How? Nothing in biology has ever shown any way that life can evolve through random natural processes. On the other hand, the Word of God assures us that God our Creator made all kinds of living things in the first week of Earth’s existence about 6,000 years ago. Biological observations affirm the fact that all things follow their scripturally described design to reproduce and vary only within their created kinds, revealing no mechanism to justify faith in molecules-to-man evolution. Read more about the fruitless search for some way to show how life could evolve from lifeless matter in “Attempts to Trace Life Back to Chemical Origins Still Maps the Willful Ignorance of the Hunters.”

So what have the researchers learned about the origin of life?

Nothing. Even if the miniscule specks of carbon residue they found came from a living organism, they have not shown that the Earth hosted life 4.1 billion years ago, or that life evolved from non-living matter, or that bacteria ever evolved into anything else. They have simply added another chapter to the evolutionary just-so story and the evolving secular beliefs about conditions on the early Earth. Their conclusions are based on their presupposition that wherever water and suitable conditions exist, life could evolve. We hear the same mantra about the possibility of life on Mars, especially in light of the recent claims about Martian water. Answers in Genesis astronomer Dr. Danny Faulkner described the fuss about Mars water as “Mars Water: Much Ado About Very Little,” and that is a fitting description for this very little bit of potentially biogenic carbon locked in a tiny zircon.

If we really want to know what things were like on the early Earth, we have only to look in the opening verses of Genesis. There we learn from a reliable eyewitness, the all-powerful God who never lies (Titus 1:2) and whose Word is true (John 17:17), that within the space of a few days He made a world hospitable to life and populated it. No Hadean hell. No millions of years of desolation or even paradise. No molecules bumping together until out popped life. Just a world created for the glory of God (Revelation 4:11) and the habitation (Genesis 1:28, 2:15) of the people He also created, rebellious people He would someday redeem through the shed blood of His Son Jesus Christ.

Previous Article Did Spiders Evolve Knees Through Gene Duplication? Next Article “Ostrich-Mimic” Is an Un-Feathered Dinosaur