No Hadean Hell on Earth

Zircons may hint at a story about the early earth, but only with the help of God’s Word.

Zircons are tiny crystals of zirconium silicate that crystallized from magma. Impervious to environmental conditions, they survive more or less intact despite erosion and environmental changes that radically alter most rocks, preserving within them clues to the conditions prevailing at the time they formed. A Vanderbilt University research team has compared zircon crystals collected in Iceland to zircons believed to represent earth’s earliest days. The results surprised them, and they concluded Hadean earth wasn’t quite as hot as previously thought.

The Hadean period is named for Hades, a Greek word for the underworld often associated with a fiery hell. Conventionally dated at more than four billion years ago, zircons embedded in sandstone from Western Australia are the only minerals on Earth thought to represent that time.

“We reasoned that the only concrete evidence for what the Hadean was like came from the only known survivors: zircon crystals—and yet no one had investigated Icelandic zircon to compare their telltale compositions to those that are more than 4 billion years old, or with zircon from other modern environments,” explains Vanderbilt University geologist Calvin Miller.

Zircons believed to represent stages in Iceland’s recent 18 million year history were compared with Hadean and other zircons from different former and modern geologic settings. The results suggest, headlines proclaim, that the early earth was not quite as hellish as once believed. 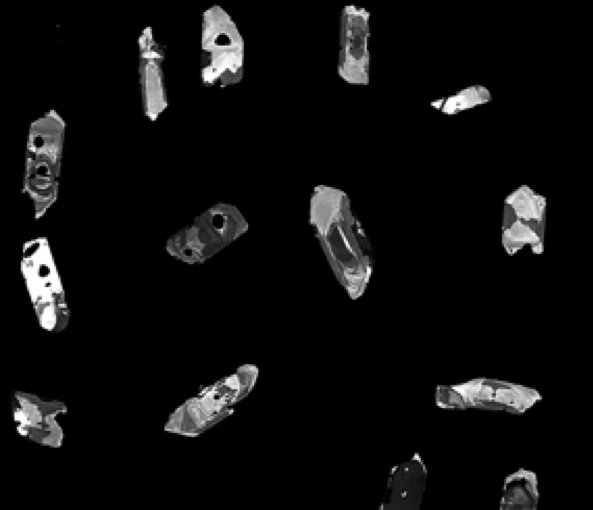 About a thousand of these zircons were collected from Iceland and compared by a Vanderbilt University team to Hadean zircons from Australia. Zircons are very small, only a tenth to a few thousandths of a millimeter. Here they are seen with a scanning electron microscope. Image: http://news.vanderbilt.edu/files/Icelandiczirconsweb.jpg

While much can be learned from zircon crystals, Answers in Genesis geologist Dr. Andrew Snelling isn’t terribly impressed with the story being spun here:

There is not much of a story here, even though the media hype is meant to draw people in out of curiosity and to make the research results seem spectacular and plausible. It is neither—just a lot of arm-waving and storytelling.

For starters, Dr. Snelling explains, the dates assigned to the Hadean zircons are highly suspect, being not only inconsistent but also dependent on a host of unverifiable assumptions:

Based only on the use of U-Pb dating (with all its problems as a result of its dependence on unprovable assumptions), the only record of rocks from the earth’s earliest history according evolutionary geologists, the period they call the Hadean, are some of the zircon grains in a sandstone in Western Australia that are dated at >4.0 billion years old. It should be noted that that other zircon grains in the same sandstone yield younger ages, and even some of the zircon grains said to be >4.0 billion years old have zones in them that yield different, and sometimes younger, U-Pb ages.

The Land of Fire and Ice

Iceland is a volcanic island that is still growing. Of course the claim that it has been growing for 18 million years is based on the same sort of unverifiable worldview-based assumptions as the dates for the Australian zircons. Nevertheless, Dr. Snelling explains, the zircons from Iceland were sorted according to the order in which they likely formed:

In this study zircon grains were obtained from samples of volcanic rocks and stream sediments (eroded volcanic rocks) from around Iceland, from the different volcanic zones across the island that represent the various stages by which the island was built. Iceland sits atop an upwelling mantle plume, as well as being a part of the Mid-Atlantic Ridge, so the ongoing volcanic activity is still growing the island from molten rock coming up from the earth’s mantle.

The elements and isotopes in zircons are viewed, Dr. Snelling says, as a record of the conditions prevailing when they crystallized from volcanic magma:

These researchers also made the same comparison with zircon grains from other “tectonic” settings, both present and past, based on the supposed past events that produced these zircons from magmas erupting during slow-and-gradual continental plate movements over the claimed billions of years since the so-called Hadean.

“We discovered that Icelandic zircons are quite distinctive from crystals formed in other locations on modern Earth,” says Tamara Carley, who collected about a thousand of them. “We also found that they formed in magmas that are remarkably different from those in which the Hadean zircons grew.”

While the conventional secular view pictures the Hadean earth as a very hot place, the findings suggest the early earth Australian zircons represent was not as hot as the volcanic material from which Icelandic zircons emerged. And water was present at the formation of both. Our conclusion is counterintuitive,” says Miller. “Hadean zircons grew from magmas rather similar to those formed in modern subduction zones, but apparently even ‘cooler’ and ‘wetter’ than those being produced today.”

But Dr. Snelling notes that these “remarkable differences,” realistically speaking, are not so dramatic as headlines would suggest:

All these comparisons showed that the trace element, rare earth element and oxygen isotope compositions of the Hadean zircon grains were distinctly different from the Icelandic zircon grains. Thus the researchers concluded that the Hadean zircon grains had crystallized from magmas that were at least 50°C (90°F) cooler than the magmas from which the Icelandic zircons have crystallized. This conclusion led to the media headlines “Early Earth less hellish than previously thought”, which is totally misleading, even in evolutionary terms.

So much for media story-telling! And besides, the researchers never explain then exactly what those magmas must have been to be so different, based on the other compositional differences of the respective zircon grains.

So does this study reveal any information about past conditions? Dr. Snelling notes the vital role of using a historical record to understand any clues, and how the researchers like these are ignoring the reliable historical record that might help explain what they see:

These researchers also concluded from these compositional comparisons that the Hadean zircons crystallized in magmas intruded into a continental setting, that is, into existing continental land (crust) whereas the Icelandic zircons are being erupted in what is a mixed oceanic and continental setting, that is, new continental land (crust) is being built, but it is an island in an ocean-floor crust setting there in the Atlantic Ocean Basin. None of this is really all that of a big deal, even for evolutionary geologists, as so much about the early earth is unknown, and so much in their thinking is based on rather obscure inferences.

However, for the biblical geologist who uses God’s Word to guide his understanding of the early earth there is no mystery or surprise. To begin with, the present is not the key to the past, because the present is a result of what happened in the past when there were no scientists to observe what really happened.

Why Hadean and Icelandic Zircons Differ

Not surprisingly, when looked at in the light of the history of Creation Week provided in God’s Word, Dr. Snelling explains, the differences in recently formed Icelandic zircons and those found embedded in Australian sandstone make sense:

God’s Word tells us that in the beginning God created the earth, which was initially covered in water (not steam from erupting volcanic lavas) and so was relatively cool. Then, two literal 24-hour days later, God created the dry land, on which He then created plants.

The details God provides in His eyewitness account of these events does not even suggest this first land resulted from erupting volcanic lavas, which after all would have required more than a few hours to cool from being erupted at more than 2000°F so as to have on top of them a soil into which fully grown plants could be rooted. In other words, God used creative processes that are beyond the understanding of finite scientists, just like the processes Jesus used to create wine from water and to raise Himself from the dead are unexplainable by human observers’ minds.

Then after the unique creative processes of the Creation Week ended, there were about 1650 years of calm, normal conditions during which rivers flowed like they do today and there was a very productive biosphere without any geologic disturbances.

However, the wickedness of a rebellious human race brought God’s judgment, when He unleashed a Flood of waters to completely destroy man and beast from off the earth’s surface, which was totally renovated and reshaped in the process. Geologic processes were cataclysmic, the pre-Flood supercontinent was torn apart, and the tectonic plates were shifted around to collide and produce new mountains on today’s many continents and also form new ocean basins. Once this year-long geologic upheaval was over, conditions again calmed to today’s slow-and-gradual geologic processes.

So the results of this much publicized research study are hardly “earth-shattering,” nor do they provide details we didn’t already know from God’s Word. In fact, the reason these researchers have to be so tentative in their conclusions is that without the light of God’s Word to guide their thinking and understanding about the past they are literally groping around in the dark, ever learning but never coming to a knowledge of the truth (2 Timothy 3:7).

God our Creator has graciously provided us with the true history of our world. When we allow His eyewitness account, found in the Bible, to guide our scientific interpretations concerning a time no scientist could witness, what we see makes sense. Likewise, our Creator has told us the truth in His Word about how the loving relationship He originally had with man was marred by Adam and Eve’s rebellion against Him, how each of their descendants—every one of us—follows their sinful example, and how because of our rebellion each of us deserves an eternal destiny in a real hell. Thankfully, God’s Word also explains that Jesus Christ His Son came to die on the cross to make a way to restore us to fellowship with Him and to grant us abundant life with a future that need never include hell.

Previous Article Did Mammals Evolve to Rule the Night? Next Article Can Evolutionary Clues Cure Cancer?