Since ancient times history has recorded legends of people turning into animals, particularly dangerous wolves. Does some truth lurk behind the stories? Why would anyone think that could happen? Are some people even today thought to bear a werewolf’s curse?

The classic werewolf legend features a human who transforms, often at the time of a full moon, into a particularly vicious wolf. Some such shape-shifters were thought to be sorcerers with the ability to transform themselves into animals. Others were supposedly victims of a werewolf’s bite or a curse. Lycanthrope—a synonym for werewolf—recalls the cruel Greek tyrant Lycaon who angered the mythological god Zeus and was punished with such a curse, henceforth bearing in his flesh the animalistic ferocity that had always ruled his life.1 Ancient Greek and Roman writers record accounts of werewolves. Therefore, it is no surprise that these dangerous magical animals also haunt medieval lore as well as, quite sadly, the lists of people persecuted under the Inquisition during which thousands perished with such a label.

History—including the history in the Bible’s Old Testament—and the annals of modern medicine record people who sincerely thought they became animals. Taking its name from the cursed Lycaon, lycanthropy is the psychiatric syndrome in which a person believes he or she shape-shifts into a wolf or other animal. Daniel 4 records how such a delusion fell upon the Babylonian king Nebuchadnezzar. Despite Daniel’s warning that he should avoid pride because he only held power with God’s permission, Nebuchadnezzar declared himself the author of his own good fortune and the designer of his own destiny. As God had warned through Daniel’s prophecy, Nebuchadnezzar suffered what we would consider a mental breakdown, behaving and being treated as a beast until he came to know “that the Most High rules in the kingdom of men” (Daniel 4:25):

While the word was still in the king's mouth, a voice fell from heaven: “King Nebuchadnezzar, to you it is spoken: the kingdom has departed from you! And they shall drive you from men, and your dwelling shall be with the beasts of the field. They shall make you eat grass like oxen; and seven times shall pass over you, until you know that the Most High rules in the kingdom of men, and gives it to whomever He chooses.”

That very hour the word was fulfilled concerning Nebuchadnezzar; he was driven from men and ate grass like oxen; his body was wet with the dew of heaven till his hair had grown like eagles’ feathers and his nails like birds’ claws. (Daniel 4:31–33)

That true story had a happy ending, for so chastened Nebuchadnezzar eventually recovered his wits and declared, “Now I, Nebuchadnezzar, praise and extol and honor the King of heaven, all of whose works are truth, and His ways justice. And those who walk in pride He is able to put down” (Daniel 4:37).

Modern psychiatrists consider lycanthropy a rare form of schizophrenia. When patients with clinical lycanthropy think they are animals other than wolves, additional terms may apply. For instance, Nebuchadnezzar’s lycanthropy is also called boanthropy because he behaved like a cow (a bovine animal). Like Nebuchadnezzar, victims alter their behavior in accordance with their delusion, but they of course suffer no physical manifestations of looking like a wolf or other animal. 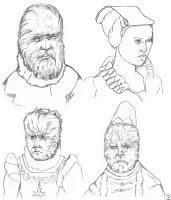 These sketches were drawn from an Ambras family portrait, depicting Petrus Gonzales, the head of the 16th century Ambras family for which Ambras syndrome—hypertrichosis universalis, or “werewolf syndrome”—is named. Image courtesy of R. Rashid and L. White, “A Hairy Development in Hypertrichosis: A Brief Review of Ambras Syndrome,” Dermatology Online Journal 13 no. 3 (2007): figure 1, http://escholarship.org/uc/item/542884mc.

When people have a superabundance of hair in all the wrong places, they may be accused of being werewolves. This rare disorder is called hypertrichosis, a big word meaning “too much hair.”

Hypertrichosis may be present at birth or develop later. Excess hair may be localized, but it is the cases in which hair covers all but the palms and soles that get the most attention socially and medically. Clinicians debate not only the classifications but also the causes of these conditions.2 One form is called Ambras syndrome. Petrus Gonzales, born in the Canary Islands in the 16th century, was covered with hair. Gonzales was a well-educated man who lived out his life in France, and his descendants also had hypertrichosis. Because their portraits were discovered in Austria’s Ambras castle in a collection belonging to archduke Ferdinand II (1529–1595), the family came to be called Ambras—which became the name of the syndrome.

Human hair has three different forms. Lanugo hair is the fine hair covering an unborn baby, and the fine vellus hair seen on the faces and arms of children replaces it. Longer, coarser terminal hair normally develops on the scalp, eyebrows, and eyelashes. After puberty under hormonal influence, terminal hair also develops in other regions. Hypertrichosis involves too much of the finer forms of hair.2 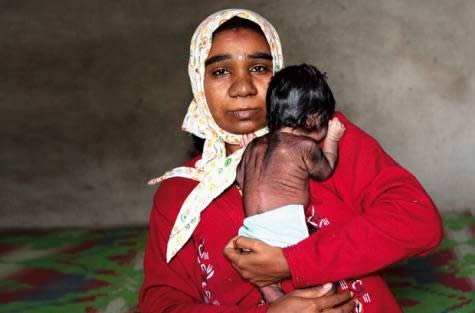 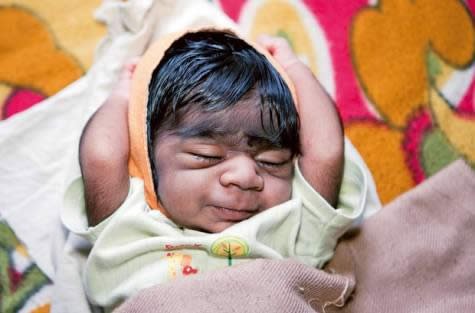 This woman in western India—as well as two of her sisters, her deceased father, and her newborn shown here in her arms—has hypertrichosis, commonly called “werewolf syndrome.” There is no treatment other than hair removal creams. The baby has the typical “shawl” of long hair extending down her neck and back in addition to abundant hair on her face. Images courtesy of Shariz Alla Qaband/Cover Asia Press through “Please Don’t Call My Baby a Werewolf” in GulfNews.com. http://gulfnews.com/life-style/people/please-don-t-call-my-baby-a-werewolf-1.1373497

Hypertrichosis presents in several ways. For instance, people with congenital hypertrichosis lanuginose are nearly covered from birth with fine unpigmented hair. It may grow up to four inches long but often falls out during childhood. In hypertrichosis universalis including Ambras syndrome, however, most of the body, including much of the face, neck, and back, is permanently covered with long fine hair. Some harmless minor abnormalities of facial architecture may occur.

The causes of hypertrichosis remain unknown. Some cases are familial suggesting a genetic component, as Dr. Rashid Rashid and Dr. Lucile White explain in “A Hairy Development in Hypertrichosis: A Brief Review of Ambras Syndrome”:

Reports of multiple affected relatives suggest a genetic basis for AS. It has also been noted that AS cases involve full-term births from non-consanguineous parents and no other family history of hypertrichosis. Regardless of the inheritance pattern, a genetic alteration is believed to play a central, but still unresolved role, in AS.2

Since both the skin and the DNA of most people with hypertrichosis are lost in history, the specific hair follicle pathology and the genetic problems that produce it are uncertain. Genetically, two people with hypertrichosis have known abnormalities of the 8th chromosome. One had a pericentric inversion, and the other had a different inversion with an insertion and several deletions in the long arm of the chromosome. Since both had a break in chromosome 8 near the same point,3 some mutation in an 8th chromosome gene regulating hair growth probably causes hypertrichosis.4 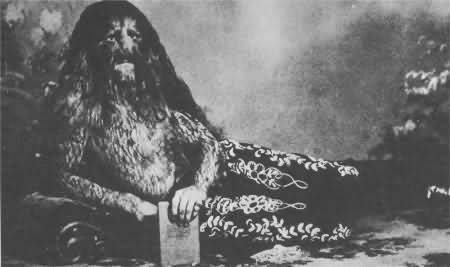 This is a 19th century photograph of Fedor, aka Jo-Jo the Dog-Faced Boy, whose hypertrichosis made him a sensation for P.T. Barnum’s customers. Image courtesy of Rashid and White, “A Hairy Development in Hypertrichosis . . . “: figure 2.

While people with hypertrichosis do not ordinarily suffer associated physical, mental, or intellectual disorders, they may certainly suffer from social stigma. The person for whom Ambras syndrome was named was given as a gift to the French nobility, though he evidently was able to lead a prosperous life. Throughout history, however, other persons have been put on display or ridiculed. Fedor Jeftichew, aka Jo-Jo the Dog-Faced Boy, was exhibited by P.T. Barnum in the 19th century.5 In August 2014, headlines reported that in western India Savita Karande, who like her two sisters and her deceased father has hypertrichosis universalis, gave birth to a little girl with the condition. Three of Savita’s sisters have normal hair patterns. The family has been stigmatized over the years but fortunately has not suffered overt persecution.6

We are thankful that the days of thinking people can turn into werewolves are (hopefully!) long gone. Fortunately, hypertrichosis is not associated with any devastating physical or mental consequences, and both hypertrichosis and clinical lycanthropy are rare. It is easy to understand how in an ancient and medieval world in which wild animals often wreaked havoc on domesticated animals and defenseless people, myths and legends about werewolves could develop.

Yet all these problems—physical anomalies associated with mutations, mental illness and delusions, the curse of vicious animals, the nasty way many people mistreat and fear people who look different from themselves, and cruel persecution even in the name of religion—are in a sense related. The first three are the result of the Curse that came upon mankind (Romans 5:12–21) and our world (Romans 8:22) as a result of Adam’s rebellion against our Creator, as described in Genesis 3. Mistreatment and persecution of other people is an ongoing manifestation of the wickedness of human beings, for we are all sinners (Romans 3:23).

Sin’s curse is the reason we suffer and the reason we die. God designed this world to be “very good” (Genesis 1:31). When we understand from Genesis that man’s sin brought suffering and death into this world, then we can be very thankful for the indescribable gift of Jesus Christ (2 Corinthians 9:15). Jesus, God’s Son, came into this sin-cursed world to die on the Cross and defeat death through His Resurrection. By repenting and trusting our lives and our eternal destinies to Him, we can be redeemed and have an abundant life and a glorious future with Him.