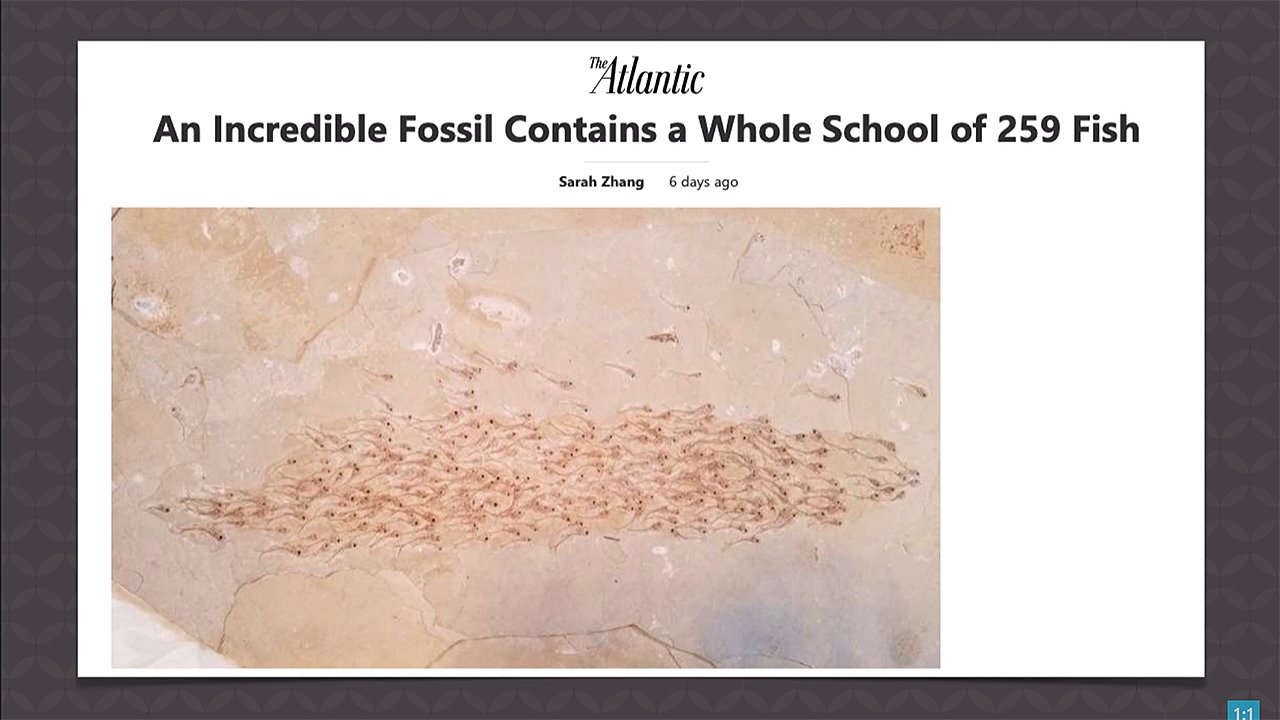 Tucked away in the corner of a museum in Japan is a slab of limey shale. This rock features something incredible—259 fish, with scales, eyes, and fins—frozen as if in mid-swim. It appears these fish were preserved in the position they were in the instant they died. But how on earth is this possible? Fossil experts are confused, but I’ve solved the mystery!

A recent article reported on the attempt by several experts to discover how this fossil, found in the Green River Formation, was formed (and I encourage you to go to the article and see the photo—it’s a truly incredible fossil!). One expert, who has studied other fossils from the Green River Formation, said that the school of fish probably died together because of a volcanic eruption, a mass of oxygen-poor water, or a temperature shift, and then all the fish fell to the bottom of the lake and were aligned by the current and then fossilized. But mathematical models appear to rule out this explanation. Others have suggested maybe a collapsed sand dune buried them, but they admitted “they don’t have a great explanation.”

This school of fish was catastrophically buried by water-borne sediments during the immediate aftermath of the global flood of Noah’s day.

But I do! Since I start with the history in God’s Word, I have the proper lens with which to view the world. This school of fish was catastrophically buried by water-borne sediments during the immediate aftermath of the global flood of Noah’s day. It’s no great mystery!

All around the world, we find incredible fossils that preserve intricate details. These fossils don’t point to the slow and gradual processes we observe in the present. They point to something very different in the past—a catastrophe. And what could catastrophically bury billions of creatures, all around the world? The global flood and its aftermath, as described in Genesis.

In the article, the author writes,

Scientists have discovered other fossils featuring large groups of fish, but the fish tend to be jumbled, facing every which direction—as you would expect if a school of fish died, sunk to the bottom of a lake, and was slowly buried in sediment.

Now, this is not science. You can observe it for yourself! Put on some goggles or swim mask and swim to the bottom of a lake and look around—you won’t find piles of dead fish just waiting to be fossilized! Dead creatures are quickly devoured by other fish and microbes. No, jumbled fossils are also created quickly by rapid burial, but they're usually a mixed mass of different organisms that are swept together into one place, then buried catastrophically.

AiG speaker and writer Avery Foley and guest Roger Patterson, AiG manager of education resources, discussed this news story today. Answers News is our twice-weekly news program filmed live before a studio audience here at the Creation Museum and broadcast on my Facebook page and the Answers in Genesis Facebook page. We also covered the following interesting topics: