Marvels of the Monarch

A monarch’s development from caterpillar to adult and its incredible ability to migrate clearly display the Creator’s design.

What animal has a brain the size of a pinhead and yet can pinpoint a location 3,000 miles (4828 km) away and navigate there with an accuracy of 100 feet (30.5 m)?1 It is the most famous butterfly in North America—the monarch. But the winged adult is just the fourth (and final) stage in this insect’s marvelous life cycle.

The monarch butterfly (Danaus plexippus) begins life as an egg (ovum) in its mother’s body. Monarchs usually lay their eggs on a milkweed flower petal or leaf. Their eggs are very small, approximately the size of a pinhead and slightly oblong.

After 3–6 days, the caterpillar (larva) emerges from the egg. Over the next 17 days or so, the caterpillar grows and molts four to five times, shedding its exoskeleton (“outer skin”) to make room for new growth. Under the constant threat of being eaten by predators, such as ladybugs and praying mantises, the caterpillar obtains poisons from its host plant, the milkweed (genus Asclepias). These poison compounds are called cardenolides or cardiac glycosides, which can sicken any animal foolish enough to eat the caterpillar. Vertebrate predators, such as the blue jay, have been observed throwing up after eating a monarch.

Upon maturity, the caterpillar seeks a suitable site, usually under a log or tree limb, on which to attach and transform itself into a chrysalis (pupa). “Inside the pupal exoskeleton, the complete disassembly, or chemical dissolution, of the larval body occurs, and areas of undifferentiated cells that have persisted through all of the molts of the larvae . . . begin to form the tissues of the adult butterfly.”2 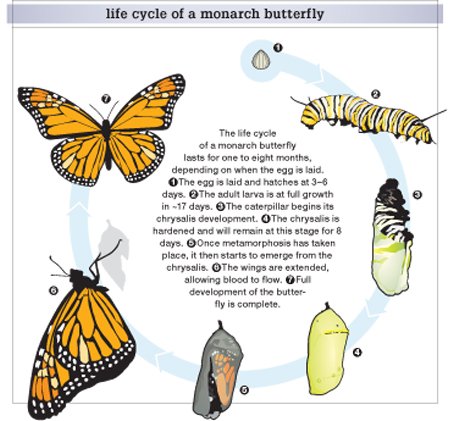 After eight days, the adult (imago) emerges. Depending on the time of year, the adult lives anywhere from one to eight months.2 At this stage, the monarch performs the second great marvel of its life: migration.

The monarch is the only butterfly that migrates on a regular basis both north and south, as many birds do.

Most monarchs from eastern North America migrate in the fall to an area west of Mexico City. This journey can take as long as three months.2 Monarch butterflies west of the Rocky Mountains winter in central and southern California, but recent findings indicate that some western populations may winter in Mexico as well.3

The long journey from eastern North America ends in the high fir forests of a mountain chain in central Mexico, known as the Transverse Neovolcanic Belt. Once at their cool wintering sites, hundreds of millions of them slow down their activity for a period. They blanket the fir trees, creating one of the great spectacles of the natural world. 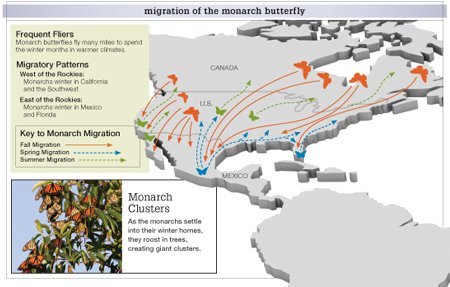 Once the migration back home begins in the spring, the females usually fly far enough to find host plants, lay their eggs, and die. During the spring and early summer, several generations are usually required before the butterflies reach northeastern North America. From there at summer’s end, they once again begin their long southward migration.

The Origin of Monarchs

“The oldest ‘true’ butterflies . . . are swallowtails (Papilionidea) from Texas that are uncannily similar to the modern-day . . . Baronia brevicornis . . . that is still found in Mexico,” says Shappert. “Together, all of the fossil evidence suggests that all of the modern families of butterflies were already well developed and differentiated by the beginning of the Cenozoic era, some 66 million years ago.”5

Evolutionists also have no naturalistic explanation for the complete metamorphosis of a butterfly. Where did the information come from for such a complicated—and seemingly unnecessary—life cycle?

Schappert admits that there is no plausible evolutionary explanation:

“All of a sudden, they have wings where there were none before, and even the long, articulated legs have become very different from the short stubby ones of the larva . . . . The complete re-creation of the body of a caterpillar into the body and wings of a butterfly is, without doubt, one of the wonders of life on Earth.”6

Not only is it a wonder; it is a miracle. As a well-known lepidopterist has stated, “The amazing process of metamorphosis—the butterfly’s transition from egg to caterpillar to pupa to winged adult—is well known and fairly well understood, but it’s still rightly regarded as a miracle.”7

The best evidence for the origin of butterflies, in all their beauty is, “In the beginning, God created . . .” (Genesis 1:1).

Previous Article The World’s a Graveyard