Fossils can be found everywhere from the bottom of canyons to mountain peaks and maybe even in your back yard. Most fossils are formed when an organism (plant or animal) or trace of an organism (such as a footprint or even scat) is deposited from water into sediment. When the sediment solidifies, it makes a cast of the organism.

Fossils can also form when minerals precipitated from water in the sediment replace organic material to form a stony replica. This process must happen very quickly before the organism has time to decay. That’s why most biblical creationists believe that almost all fossils were formed in a short time during and after the worldwide Flood of Noah’s day over 4,350 years ago. As Ken Ham likes to say, we find billions of dead things, buried in rock layers, laid down by water, all over the earth. And after reading the Bible’s description of the Flood, that is exactly the evidence we would expect to find.

Fossils can only lead to the truth when we view them from a biblical perspective. Many evolutionists have attempted to use their secular worldview to interpret fossils as proof of millions of years of evolution.

These preserved remains always confirm what God’s Word says about the creation of the earth and the global Flood that came as God’s judgment for sin.

For creationists who view fossils through a biblical worldview, however, these preserved remains always confirm what God’s Word says about the creation of the earth and the global Flood that came as God’s judgment for sin. As Dr. Andrew Snelling, AiG’s geologist, said, “AiG makes so much of fossils because they are a visible witness to the Flood in a culture that rejects God’s Word but still needs to hear that God is our judge, yet he also provided a way of salvation just as he did in Noah’s day.”

You may think that nothing could be more boring than fossils—a bunch of dusty old bones and rocks. But fossils act as a record preserved to teach us about the earth’s past, to confirm Scripture, and to glorify God.

On this National Fossil Day, AiG praises God for the wonderful collection of fossils he has blessed us with. When you visit the Creation Museum, perhaps you’ll spot them!

In the museum lobby, you can’t miss the enormous fossil of a mastodon, a member of the elephant kind along with mammoths. Known as the Burning Tree Mastodon, this skeleton is a casting of the real fossil discovered in 1989 beneath a golf course in Ohio, but it looks just like the real thing. It is one of the largest and most complete mastodon skeletons ever found. 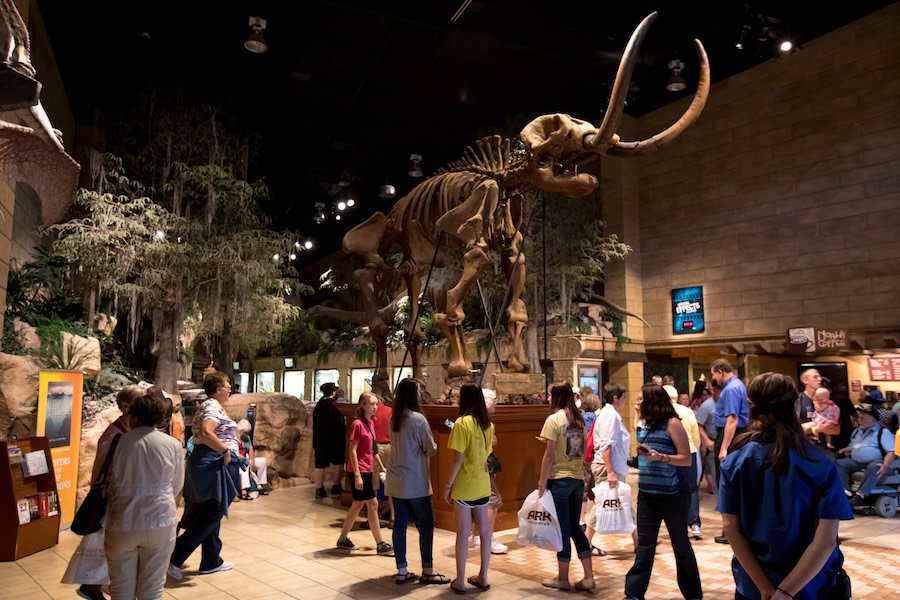 Mastodon Casting in Main Hall of the Creation Museum 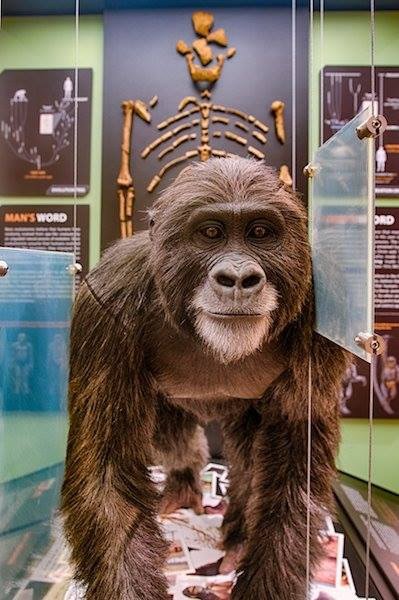 Lucy Display at the Creation Museum

In the Starting Points room, you’ll encounter one of the most famous fossils in history: Lucy. (This is also a casting of the original skeleton preserved in the National Museum of Ethiopia). Lucy is a partial fossil of an Australopithecus afarensis—an extinct ape—discovered in 1974 in Ethiopia. However, though all anatomical evidence reveals that Lucy was indeed just an ape, evolutionists claim that Lucy was a bipedal ancestor to humans—an ape-man capable of walking on two feet (even though her foot bones were not with her fossil remains).

Most people don’t realize that these evolutionists make their claims based on fossilized human-like footprints found 1,000 miles away from where Lucy was discovered. Because these footprints are considered by evolutionists to be too early to have been made by humans, they assume that Lucy (or a supposed ape-man like her) made these tracks.

If you walk farther in the museum, you’ll come face to face with Ebenezer, our world-class Allosaurus fragilis fossil. At 30 feet long and 10 feet tall, Ebenezer is an amazing representation of a creature that once roamed the earth.

Ebenezer was discovered in 2002 near Massadona, Colorado, and was later generously donated to the museum. 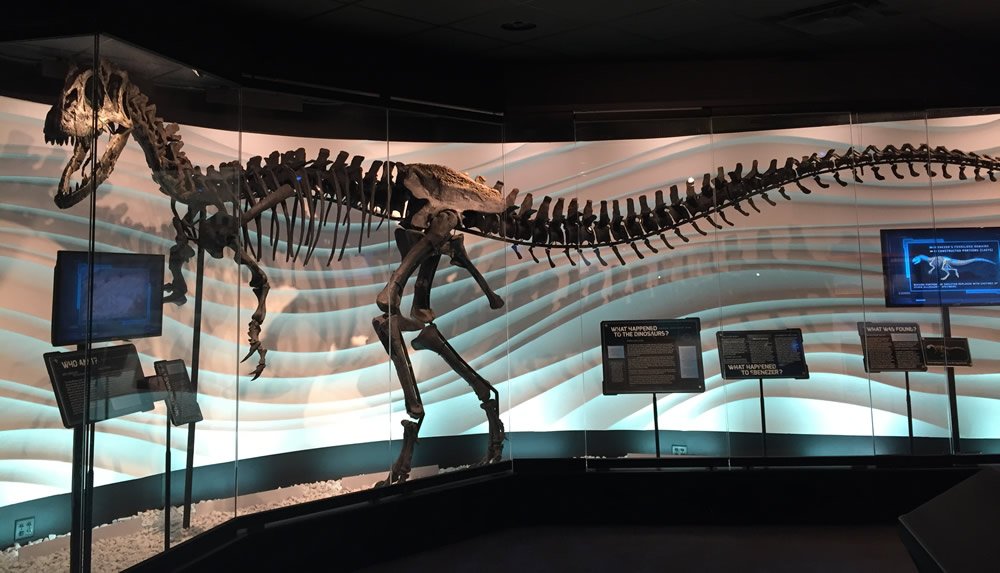 We call the skeleton Ebenezer from the 1 Samuel 7 passage when God rescued the Israelites from the Philistine army. Afterward, the prophet Samuel set up a rock to remember God’s help and called it “Ebenezer” (verse 12). Those excavating the dinosaur named him Ebenezer because they saw him as a reminder of God’s judgment of the world and how he preserved mankind and animal kinds on Noah’s Ark.

Unlike most fossils, the majority of Ebenezer’s bones were found together in the correct anatomical positions, rather than scattered around. Though it’s rare to find an allosaur skeleton more than 50% complete, Ebenezer is 56% complete with 139 bones recovered from the possible 250.

Ebenezer’s skull is also special because it is probably the largest and most complete allosaur skull ever found—97% complete.

Ebenezer’s skull is also special because it is probably the largest and most complete allosaur skull ever found—97% complete. Even the delicate hyoid bones were intact. (Hyoid bones are not connected to the rest of the skeleton, but are part of a group of bones called the hyoid apparatus, which serve as an anchor for the muscle of the tongue and larynx and helps with swallowing and vocalization.)

While Ebenezer sports a cast of his actual skull in the exhibit, we keep the actual skull in a separate display case because it is too heavy to be held up by the same supports which hold up the skeleton.

We recently had Ebenezer’s skull CT scanned to take a look inside. Dr. Andrew Snelling reported that the CT scan shows the size and shape of its brain case, the insides of the teeth, and the lines where the bones fused together as the creature grew. It was the first time that an allosaur skull has been inspected that thoroughly. Answers in Genesis hopes to discover new information about this species and share our findings with other researchers.

When you walk through the museum, you’ll see dozens of other fossils of dinosaur eggs, dinosaur tracks, plants, bones, teeth, trilobites, and other creatures.

One of our most interesting fossils is displayed right around the corner from the Special Effects Theater. It is a perfectly preserved fossil of a perch eating a herring. Found in Wyoming, this fish had to be buried and preserved rapidly, likely during the immediate aftereffects of Noah’s Flood.

Read the inspiring story of how the fossil came to hang in our museum in this Creation Museum blog.

In the same exhibit is the fossil of a horseshoe crab fossilized with its final tracks. In fact when the late Dr. David Raup, one of the world’s leading paleontologists of the 20th century, saw the fossil, he was impressed, never having seen both a horseshoe crab and its fossilized trail together.

Fossils Behind the Scenes

AiG has even more fossils that aren’t on display. In our Collections Room we have shelves and drawers full of fossils as well as gems, shells, and mounted animals that have been donated to us. In fact just last week, someone donated an oreodont skull.

Because we have been blessed with so many specimen donations, AiG tries to be a blessing by sharing our fossil wealth with other creation ministries and museums.

Stephanie McDorman, the registrar of the Collections Room, has been working with these pieces for 16 years, meticulously marking, photographing, and cataloguing each specimen. 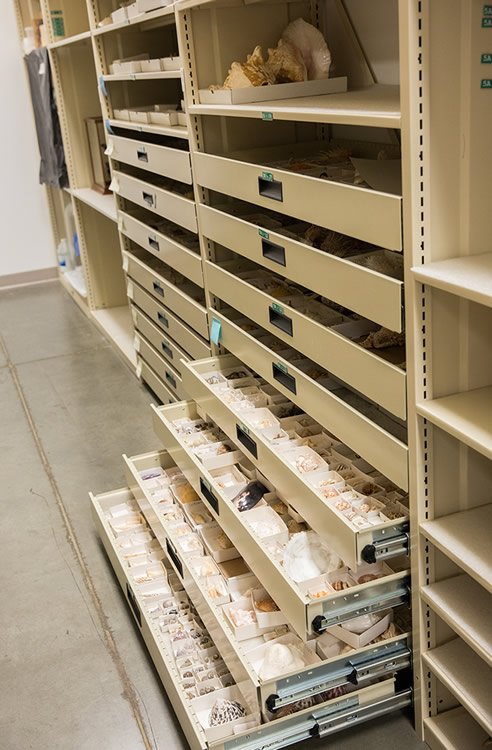 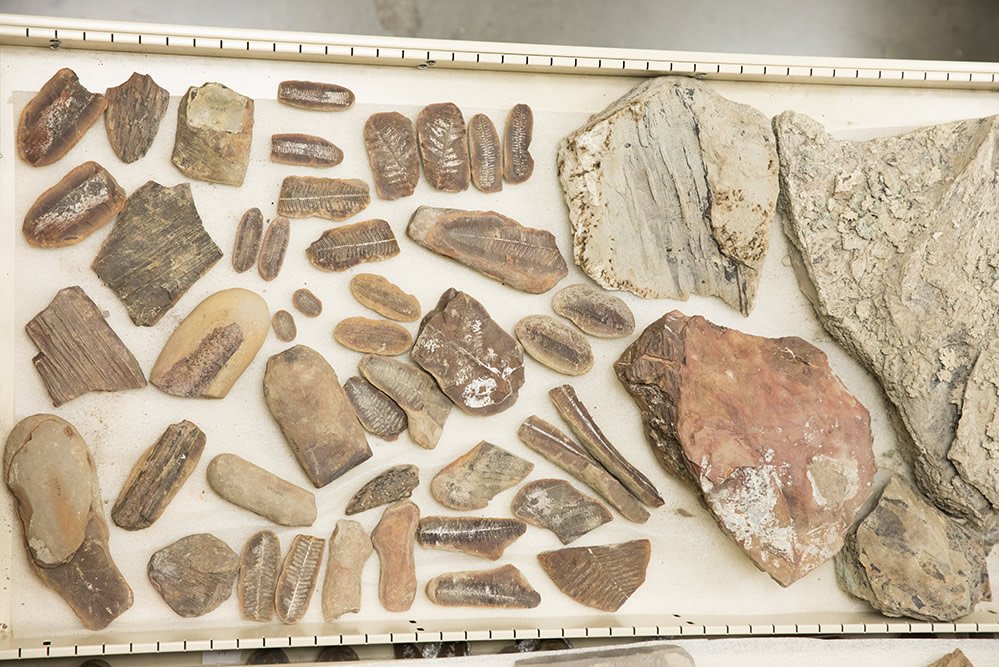 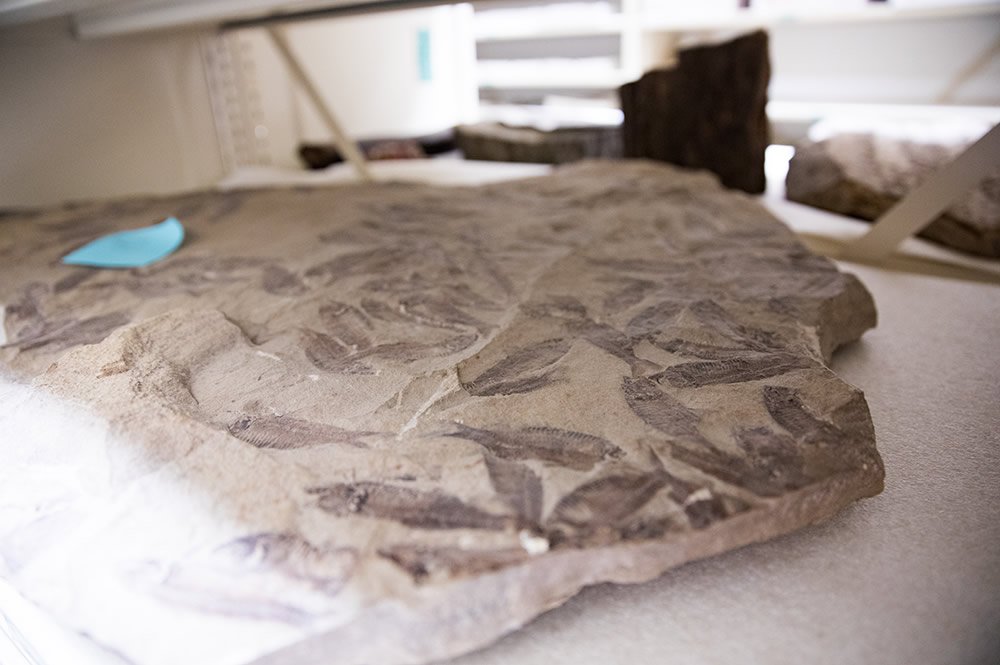 She has helped with compiling exhibits at both the Ark Encounter and the museum, enjoying how the fossils tie the biblical message with the real world.

Stephanie has come to understand that “‘where your treasure is, there your heart will be also’ [Matthew 6:21] doesn’t apply just to money; some people’s treasure includes rocks, fossils, and butterflies.”

Want to donate something to our collection? We’re always thankful for donations of fossils, gems, insects, rocks, and other artifacts (but please no taxidermy.)