Taking out the Trash: Bladderwort DNA Is 97% Junk-free

by Dr. Elizabeth Mitchell on May 20, 2013
Featured in News to Know
Share:
Email Using:
Gmail Yahoo! Outlook Other

Bladderwort DNA is 97% junk-free: Are there evolutionary implications?

The bladderwort is a highly specialized carnivorous plant. New research shows its genome is surprisingly streamlined. Multicellular organisms’ genomes typically contain a great deal of non-coding DNA  (often called “junk” DNA, implying that it has little function), but not the bladderwort. So how can evolutionists explain the bladderwort’s small genome? Is “junk” DNA necessary for complexity, or not?

Non-coding DNA doesn’t code for specific proteins but may have regulatory or other important functions. Some evolutionists have assumed that “junk” DNA is essentially “leftovers” from the evolutionary process as organisms evolved from one kind of organism into another. 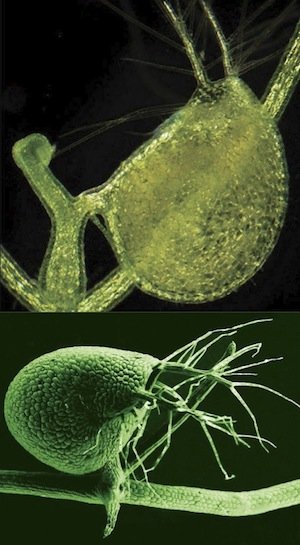 This is one of the one-millimeter-long bladders on Utricularia gibba, as seen under the light microscope (top) and in a colorized electron micrograph (below). Utricularia gibba is a species of bladderwort. When trigger hairs are touched, the plant pumps water out of the bladders. The suction thus created draws in organisms from which the plant derives nourishment. Image by Enrique Ibarra-Laclette, Claudia Anahí Pérez-Torres and Paulina Lozano-Sotomayor, via news.yahoo.com.

The ENCODE project’s discovery—that at least 80% of the so-called “junk” DNA in humans has “specific biochemical activity”—has left a bad taste in the mouths of many evolutionists. After long claiming such “junk” was primarily a useless vestige of eons of evolution, the finding that most actually seems to do something in humans led to a debate over the definition of the word functional.

The discovery that the bladderwort Utricularia gibba functions quite well without a lot of non-coding DNA tucked into its genome has been something of a revelation. “The big story is that only 3 percent of the bladderwort's genetic material is so-called ‘junk’ DNA,” says Victor Albert, who co-led an international team of investigators. “Somehow, this plant has purged most of what makes up plant genomes. What that says is that you can have a perfectly good multicellular plant with lots of different cells, organs, tissue types and flowers, and you can do it without the junk. Junk is not needed.”

Carnivorous bladderworts live in freshwater and in wetlands, and there are over two hundred Utricularia species worldwide. When trigger hairs are disturbed, they typically pump water out of tiny chambers, sucking in small creatures that supply their nutritional need for nitrogen and phosphorus. Bladderworts lack true roots, but their flowers closely resemble snapdragons. 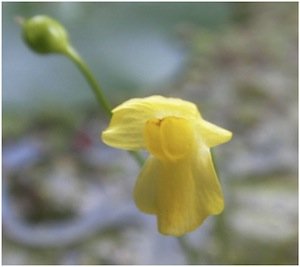 The flower of the bladderwort resembles the snapdragon. Bladderworts lack true roots, however, and derive some of their nourishment from creatures captured in their tiny bladders. Image by “I, kissfox,” via Wikimedia Commons.

Researchers believe the evolutionary history of the bladderwort has included three complete doublings of its genome since splitting from a common ancestor that also gave rise to the tomato. Luis Herrera-Estrella, co-leader of the project, says, “This surprisingly rich history of duplication, paired with the current small size of the bladderwort genome, is further evidence that the plant has been prolific at deleting nonessential DNA, but at the same time maintaining a functional set of genes similar to those of other plant species.”

In their paper “Architecture and evolution of a minute plant genome,” published in Nature, the authors propose that as organisms evolve, some are more prone to hang onto the genes that get duplicated within their genomes and others are more likely to shed useless material through an “inherent gene deletion bias.”1 Specific characteristics make the bladderwort genome unusual, such as shorter sections of DNA needed to promote gene expression. They note the absence of segments of DNA that they assume should be there if the genome had undergone the duplications they believe it did during its evolution.2

The authors then write that these genomic characteristics “support the notion that numerous microdeletions have occurred during U. gibba genome evolution, as previously observed in Arabidopsis and maize.”3 However, the studies to which they refer do not describe any documentation of evolution of one kind of plant into another but only the genetic differences among varieties of Arabidopsis and among varieties of grasses. They offer no evidence that such a process would produce newly evolved kinds of plants or animals.

Molecular geneticist Dr. Georgia Purdom of Answers in Genesis, commenting on the discovery and its interpretation, said:

They say the genome has “undergone three complete genome doublings” since it split from a common ancestor with the tomato and that it has deleted most of its non-coding or “junk” DNA. But these are assumptions based on the unobservable past according to man’s ideas that one plant evolved from the other. Since the tomato plant and bladderwort plant belong to different families they are likely separate created kinds and are not related to one another.

It is fascinating that this plant has very little non-coding DNA because most multicellular organisms have quite a bit. However, that does not in turn demonstrate that non-coding or “junk” DNA in humans, other plants, and animals is irrelevant and unnecessary. Further experimental science needs to be done (like the ENCODE project is doing) to discover the functionality of so-called “junk” DNA in many organisms.

The observable science shows that the bladderwort plant needs very little non-coding DNA to function. Everything else claimed by the evolutionists studying bladderwort is merely assumptions about the unobservable past based on man's ideas instead of God’s Word.

There are mechanisms that geneticists can observe in various organisms by which genetic material sometimes gets duplicated. However, in no case does this duplication result in a new or more complex kind of organism. For instance, bacterial antibiotic-resistance genes may appear in duplicate and make some bacteria more resistant to antibiotics, but all are still the same kind of bacteria. Furthermore, the presence of near-duplicate genetic sequences as is seen in multicellular organisms like human beings is not proof those near-duplicates originated through evolution or genetic accident. Finally, the existence of similar genes in different kinds of organisms is a reflection not of their common ancestry but rather of their common design features that equip them to live on earth. And the existence of carnivorous plants—a departure from God’s original design—reflects the variation that has occurred within some kinds of plants over the past 6,000 years in a sin-cursed world.