Secular biology textbooks have finally begun to remove a long-time favorite of evolutionary teaching—the fraudulent drawings of embryos produced by Ernst Haeckel in 1868. But another one of Haeckel’s errors is still alive and well. Haeckel claimed that “gill slits” (now called “throat pouches”), a backbone, and a tail in vertebrate embryos are proof that humans and animals descended from a common ancestor. This idea is still presented in textbooks, despite the fact that the initial stages of development follow very different patterns of cell division and become very different structures in the mature organisms. The differences are ignored, and the similarities, though fleeting and only superficial, are emphasized to support the idea of a common evolutionary history. 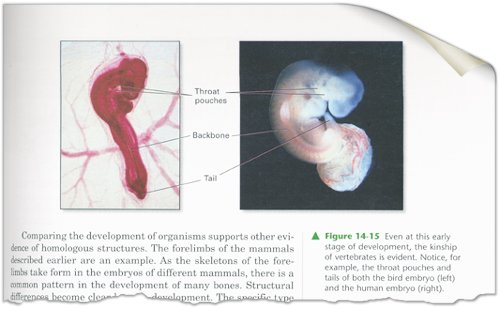 The fact that the “throat pouches” develop into jaw and gill structures in fish, and ear and throat structures in humans shows that the apparent similarities in the embryos are not indications of common ancestry. Rather, it is clear that these vertebrates do not share a common ancestor because they develop in unique ways.