Dinosaurs, Dating, and the Age of the Earth

How are dates for dinosaur fossils determined? Does the Bible mention these enormous animals?

Let me get clear about your beliefs. How old do you believe the Earth is? And how do you debunk carbon dating? Dinosaur bones have been dated, based on the half life of certain elements, at millions of years. The earliest human remains found are nowhere near that old. Also, in the bible there is no reference to dinosaurs. I would think that a creature of such threat to life and sheer size would be mentioned, at least in passing. Perhaps I am not familiar with the passage that clearly describes man walking amongst dinosaurs.

Let me get clear about your beliefs. How old do you believe the Earth is?

About 6,000 years old if you add up the ages given in the genealogies in the Bible from Adam to Christ and factor in certain other timeframes given in the Bible (and of course, add in the five days prior to Adam (since he was made on Day 6)). See The Forgotten Archbishop.

Trying to determine the age of something gets into what we call “historical” science. Past events cannot be repeated as per scientific methodology. For example, try to repeat Abe Lincoln’s life—no one can do it. So no one can say scientifically that Abe Lincoln gave the Gettysburg address. We need to rely on eyewitness accounts that Abe Lincoln lived and did the things he did. It is the same way with creation. We put our trust in the account of the One who created all things, the One who was an eyewitness. God is perfect and man isn’t, so it would be better to trust God over man.

And how do you debunk carbon dating?

Also, creationists have been using carbon-14 to undermine alleged “millions of years” dates. Since carbon-14 should be decayed so much as to be undetectable within about 100,000 years, then a sample tested by using methods based on uranium decay or potassium argon, etc. which yields a date of 200 million years should not contain measurable amounts of carbon-14 in the sample, and yet such samples have been found! Please see Measurable 14C in Fossilized Organic Materials (PDF).

I just wanted to tell anyone that might see this, that I absolutely love this website. Everything on this website is absolutely perfect. The articles, all the materials, everything is just great. I get excited about coming to work now just so I can peruse the site during down time. I have learned more in reading one article on this site, than I did in my entire time in science classes in public education. There truly is overwhelming evidence for the case for Christ and creation. The idea of understanding genesis to better understand who Christ was and what He accomplished has opened new doors for deep revelation. I wanted to thank you for keeping up with the site and just for providing such a plethora of information. I hope to subscribe to the magazine soon, and possibly make a contribution to AiG, since I am being fed so much!! Thanks and God bless.

Have Something to Add?

Let us know what you think.

Dinosaur bones have been dated, based on the half life of certain elements, at millions of years.

Actually, most dates for dinosaurs are done by geological column dating. Scientists see what depth the bones were found, and translate it to a date based on uniformitarian assumptions. You’ve surely seen a geologic column picture with dates to the side. Here is an example off-site: http://www.palaeos.com/Timescale/timescale.html.

When someone finds a dinosaur bone, he gauges the depth of the bone and then uses the date that is assigned to that depth. As Christians, we look at this same evidence: dinosaurs and the depth at which their bones are buried. Then we look at the biblical explanation of the geologic layers (image taken from Time for an Upgrade?).

Most of those fossils were probably formed in the early stages of the Flood, which occurred around 4,500 years ago.

The earliest human remains found are nowhere near that old.

Using the same geologic column dating that old-earth believers use, many dinosaurs remains are found in Cretaceous limestone, which is allegedly 144 to 65 million years old. There have been human fossils found in this same level, though controversial.1 So by their own dating, these humans should be the same age. Also please see Why Don’t We Find Human & Dinosaur Fossils Together?

Also, in the bible there is no reference to dinosaurs.

Actually there probably are. The word “dinosaur” is a new word, invented in 1841. So we wouldn’t expect that word in the Bible. But the word dragon is used quite a number of times and could easily be referring to dinosaurs. The Hebrew word Tannyn is often translated as dragon. There is also “behemoth” used in Job 40. The description given in this passage matches the description of animals we know as sauropod dinosaurs. Then there is an animal called “leviathan.” Three different biblical authors use this term and the description they give of it matches that of a sea dragon/dinosaur. Please see Dinosaurs and the Bible.

I would think that a creature of such threat to life and sheer size would be mentioned, at least in passing.

I agree that in passing it should be recorded, and Job seems to do just that, as he records the description of behemoth in quite a bit of detail. Please see Could Behemoth have been a dinosaur?

However, to assume these dinosaurs were a complete threat to man is the result of teachings that are seen prominently in movies like Jurassic Park. God says in His Word that the fear of man didn’t appear in the animals until after the Flood (Genesis 9:2). So they probably didn’t have many, if any, “run-ins” with dinosaurs until after this. Even after the Flood, what is to say dinosaurs were looking for humans to eat? Humans could have just as easily been hunting them. After all, they had the fear of man in them.

Perhaps I am not familiar with the passage that clearly describes man walking amongst dinosaurs.

I want to encourage you to study this in more detail. It is pretty interesting to read about possible mentions of dinosaurs in the Bible. In fact, many dragon legends are probably based on actual observations of dinosaurs, making sense of the numerous dragon legends throughout the world. Below is an image to help you to visualize it. 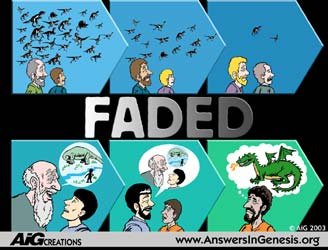 Previous Article Apartheid and Christian Doctrine Next Article Why Do You Take the Bible Literally?