Imagine dinosaurs living with people. The thought sounds ludicrous to a modern mind steeped in evolution. But it’s the only reasonable conclusion if the Bible is true.

Picture a party of explorers walking through a forest. As they follow a creek, the trees open to a large meadow and the stream wanders in lazy curves through the waving grass. A deer raises its head to look at them as it munches on a clump of clover. Beyond the deer they notice the outline of an Apatosaurus and its baby against the backdrop of towering pines.

If you saw this as the opening scene of a movie, what genre would you think you were watching? Fantasy? Science fiction? Documentary? While many people would consider this scene fantastical, or fictional at the very least, had you been alive around the time of Noah’s Flood, it could have described your actual, personal experience.

We all have a sort of filter, or lens, we use to look at the world around us. For Christians, this filter must be framed with the truths in the Bible, because we are called to take every thought captive to the obedience of Jesus Christ (2 Corinthians 10:1–6). That means Christians are to view the world through the truth lens of Scripture—to have a biblical worldview.

The Bible is the key historical document to help us answer questions about when dinosaurs lived, what they ate, and why we don’t see them today. Many people, including professing Christians, reject the idea that dinosaurs and people ever walked together. They believe the evolutionary story that dinosaurs died out about 65 million years ago and that modern humans appeared 100,000 years ago—so there is no way they ever encountered one another.

We come to a different interpretation of the same facts.

But when we begin our thinking with the Bible, rather than man’s ideas, we come to a different interpretation of the same facts. Christians who believe the earth is young (about 6,000 years old) and people who believe the earth is billions of years old are all looking at the same evidence. We have the same fossils, the same footprints, and the same petroglyphs and other artifacts. Yet, the facts don’t speak for themselves—they must be interpreted.

If we interpret those facts through the lens of Scripture, the only logical conclusion is that people and dinosaurs were alive at the same time. Let me explain. In Genesis 1, God tells us how He created the universe over a period of six twenty-four hour days. On Day Six of Creation Week, God created land animals and described them in broad categories as “cattle and creeping thing and beast of the earth” (Genesis 1:24–25). Dinosaurs were reptile-like animals that lived on land and walked with their legs under their bodies. By this description, they would have been among the “beasts of the earth” created on Day Six. As we read on, God made people (Adam and Eve) in His own image on the same day (Genesis 1:26–28). If dinosaurs were created on Day Six and humans were created on Day Six and the days were normal length, then we must naturally conclude that dinosaurs and humans were alive at the same time.

Though not dinosaurs, creatures like pterodactyls and plesiosaurs would have been created on Day Five and would have been flying through the skies and swimming through the seas when humans were on the earth. In this light, we could add a pterodactyl soaring above the meadow to the scene we painted earlier. But just being alive at the same time doesn’t mean they necessarily interacted. Many people alive today will never interact with a bear, but that doesn’t mean they aren’t alive at the same time.

At the time of Creation, God brought animals to Adam to give them names. While dinosaur doesn’t appear in our English Bibles (after all, the word wasn’t even invented until 1841), they were likely among the “beasts of the field” God brought to Adam. We cannot be certain that Adam regularly interacted with dinosaurs or pterodactyls in Eden, but it is not an unreasonable conclusion in a biblical worldview.

From the fossil record, we know about 50 different kinds of dinosaurs were alive on the earth before the Flood described in Genesis 6–9. Just over 1,650 years passed between the Creation and the Flood, so it seems likely that humans and dinosaurs must have interacted during this time, but they may have lived in different areas and not necessarily right alongside one another. However, with the vast number of fossilized dinosaurs we find across the globe that were buried as a result of the Flood (even in Antarctica), it would be hard to argue there was never contact between the two. Did children keep pet dromaeosaurs, and did Dad go out to saddle up the family Triceratops to ride to town? We can’t be dogmatic about those things because they are not clearly described in the Bible, nor do we have any physical evidence of those interactions.

But what about after the Flood? Were there still dinosaurs around? As we look to the biblical account, we see God brought representative pairs of all of the land animal kinds to Noah to take on the Ark to keep them alive on the earth (Genesis 7:3). The rest of the land animals and all of the people not on the Ark perished as God judged the world for its sinfulness and rebellion.

Many will object that dinosaurs were too big to fit on the Ark. But that is a common misconception—the majority of dinosaurs grew to be the size of a bison or smaller, and even the big ones started out little. The largest dinosaur eggs are about the size of a football, and God could have brought juvenile animals to the Ark to keep the space and food requirements to a minimum. This arrangement would also have allowed maximum reproduction to replenish the population after the Flood.

In the Bible, we actually have a record of what sounds much like a sauropod dinosaur. Job lived in the Middle East after the Flood. During an interaction with Job, God described many different creatures like eagles and mountain goats to help Job understand God’s infinite wisdom and power.

In Job 40, we read a description of the behemoth, which is among the largest creatures and has a tail like a cedar tree. While some Bible commentators suggest this was a hippo or elephant, you can read for yourself and see that description doesn’t match. In Job 41, we read of another great creature, Leviathan, that does not seem to match any creature known today but could easily be a pliosaur. Other passages in Scripture that mention great beasts of land and sea may also refer to dinosaurs and their contemporaries. Although we do not see these amazing creatures alive today, many artifacts and accounts depict humans interacting with dinosaurs in the recent past.

When we build our thinking on the Bible, trusting it as true revelation from God, we can answer questions like where dinosaurs fit in history and be certain that man once walked the earth with these magnificent animals. 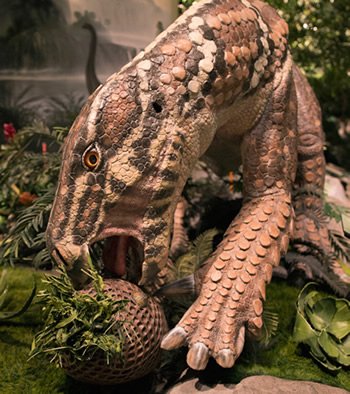 A natural question follows the biblical claim that dinosaurs lived alongside humans in the original creation: “Why didn’t they eat Adam and Eve?” Like most questions, this one is based on a few assumptions.

The first assumption is that the fearsome teeth of dinosaurs like T. rex and Allosaurus must have originally been made for eating meat. If you were to look at the sharp teeth in a fruit bat’s skull, you might get the same impression—but you would be mistaken. The fruit bat’s teeth are used to rip and shred the flesh . . . of papayas! The teeth of the tyrannosaur and allosaur kinds would have originally been used for eating fruits with thick rinds or shredding other vegetation. A steak knife works on salad, too.

The second assumption is the uniformity of nature. Many people assume that things have always been as they are today. But starting from the Bible, we see God originally created man to eat a vegetarian diet (Genesis 1:29) and “to every beast of the earth, to every bird of the air, and to everything that creeps on the earth, in which there is life, I have given every green herb for food” (1:30). God then pronounced the operation of the world He had created “very good.”

After sin corrupted the world, animals began eating one another and probably humans (and those daggers in T. rex’s magnificent jaws became lethal weapons). But this was not how God intended His perfect original creation to function. The death and suffering we see in the world today will cease in the future when God restores the creation; the lion will eat grass like the ox, and the wolf and lamb will feed together (Isaiah 65:25).

Roger Patterson taught in public schools for eight years before joining Answers in Genesis. He earned his BS Ed degree in biology from Montana State University–Billings. Roger is author of Evolution Exposed and serves on AiG’s editorial review board.

Dragons, Dinosaurs, and the Bible Excerpt