Caring for the Animals on the Ark

While it is possible that God made miraculous provisions for the daily care of these animals, it is not necessary—or required by Scripture—to appeal to miracles.

According to Scripture, Noah’s Ark was a safe haven for representatives of all the kinds of air-breathing land animals that God created. While it is possible that God made miraculous provisions for the daily care of these animals, it is not necessary—or required by Scripture—to appeal to miracles. Exploring natural solutions for day-to-day operations does not discount God’s role: the biblical account hints at plenty of miracles as written, such as God bringing the animals to the Ark (Genesis 6:20; 7:9, 15). It turns out that a study of existing, low-tech animal care methods answers trivial objections to the Ark. In fact, many solutions to seemingly insurmountable problems are rather straightforward.

How Did Noah Fit All the Animals on the Ark?

According to the Bible, the Ark had three decks (floors). It is not difficult to show that there was plenty of room for 16,000 animals (the maximum number of animals on the Ark, if the most liberal approach to counting animals is applied), assuming they required approximately the same floor space as animals in typical farm enclosures and laboratories. The vast majority of the creatures (birds, reptiles, and mammals) were small (the largest only a few hundred pounds of body weight). What’s more, many could have been housed in groups, which would have further reduced the required space.

It is still necessary to take account of the floor spaces required by large animals, such as elephants and rhinos. But even these, collectively, do not require a large area because it is most likely that these animals were young, but not newborns. Even the largest dinosaurs were relatively small when only a few years old.

What Did the Dinosaurs Eat?

Dinosaurs could have eaten basically the same foods as the other animals. The large sauropods could have eaten compressed hay, other dried plant material, seeds and grains, and the like. Carnivorous dinosaurs—if any were meat-eaters before the Flood—could have eaten dried meat, reconstituted dried meat, or slaughtered animals. Giant tortoises would have been ideal to use as food in this regard. They were large and needed little food to be maintained themselves. There are also exotic sources of meat, such as fish that wrap themselves in dry cocoons.

It is not necessary—or required by Scripture—to appeal to miracles for the provision and daily care of the animals on the Ark. Many solutions to seemingly insurmountable problems are rather straightforward.

How Were the Animals Cared For?

We must distinguish between the long-term care required for animals kept in zoos and the temporary, emergency care required on the Ark. The animals’ comfort and healthy appearance were not essential for emergency survival during one stressful year, where survival was the primary goal.

Studies of nonmechanized animal care indicate that eight people could have fed and watered 16,000 creatures. The key is to avoid unnecessary walking around. As the old adage says, “Don’t work harder, work smarter.”

Therefore, Noah probably stored the food and water near each animal. Even better, drinking water could have been piped into troughs, just as the Chinese have used bamboo pipes for this purpose for thousands of years. The use of some sort of self-feeders, as is commonly done for birds, would have been relatively easy and probably essential. Animals that required special care or diets were uncommon and should not have needed an inordinate amount of time from the handlers. Even animals with the most specialized diets in nature could have been switched to readily sustainable substitute diets. Of course, this assumes that animals with specialized diets today were likewise specialized at the time of the Flood.

How Did the Animals Breathe?

Based on my two decades of research, I do not believe that anything more was needed than a basic, non-mechanical ventilation system. The density of animals on the Ark, compared to the volume of enclosed space, was much less than we find in some modern, mass animal housing used to keep stock raised for food (such as chicken farms), which requires no special mechanical ventilation.

It is reasonable to believe that one relatively small window would have adequately ventilated the Ark. Of course if there were a window along the top center section, which the Bible allows, all occupants would be even more comfortable. It is also interesting to note that the convective movement of air, driven by temperature differences between the warm-blooded animals and the cold interior surfaces, would have been significant enough to drive the flow of air. Plus, wind blowing into the window would have enhanced the ventilation further. However, if supplementary ventilation was necessary, it could have been provided by wave motion, fire thermal, or even a small number of animals harnessed to slow-moving rotary fans.

What Did Noah and His Family Do with the Animal Waste?

As much as 12 U.S. tons (11 m. tons) of animal waste may have been produced daily. The key to keeping the enclosures clean was to avoid the need for Noah and his family to do the work. The right systems could also prevent the need to change animal bedding. Noah could have accomplished this in several ways. One possibility would be to allow the waste to accumulate below the animals, much as we see in modern pet shops. In this regard, there could have been slatted floors, and animals could have trampled their waste into the pits below. Small animals, such as birds, could have multiple levels in their enclosures, and waste could have simply accumulated at the bottom of each. 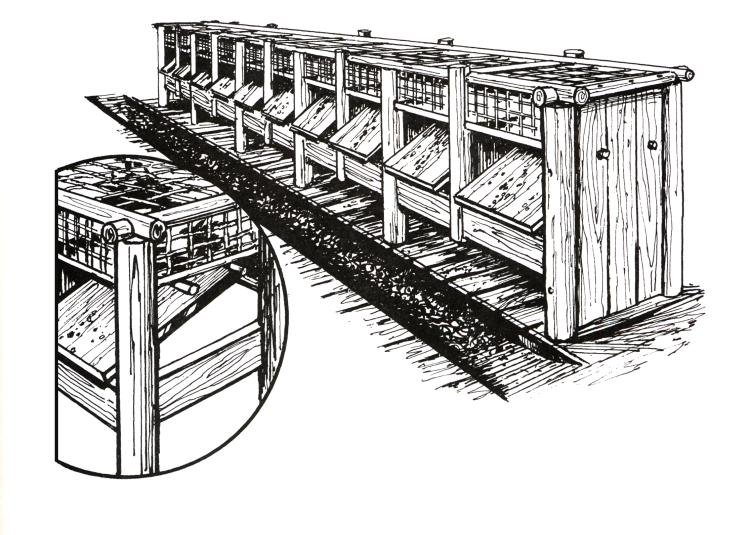 Animal enclosures with sloped, self-cleaning floors, emptying into a manure gutter or pit.

The danger of toxic or explosive manure gases, such as methane, would be alleviated by the constant movement of the Ark, which would have allowed manure gases to be constantly released. Secondly, methane, which is half the density of air, would quickly find its way out of a small opening such as a window. There is no reason to believe that the levels of these gases within the Ark would have approached hazardous levels.

Alternatively, sloped floors would have allowed the waste to flow into large central gutters. Noah’s family could have then dumped this overboard without an excessive expenditure of manpower.

The problem of manure odor may, at first thought, seem insurmountable. But we must remember that, throughout most of human history, humans lived together with their farm animals. Barns, separate from human living quarters, are a relatively recent development.

While the voyage of the Ark may not have been comfortable or easy, it was certainly doable, even under such unprecedented circumstances.

A Look Inside the Ark

This is a cross-section view of a possible design of the interior of the Ark. 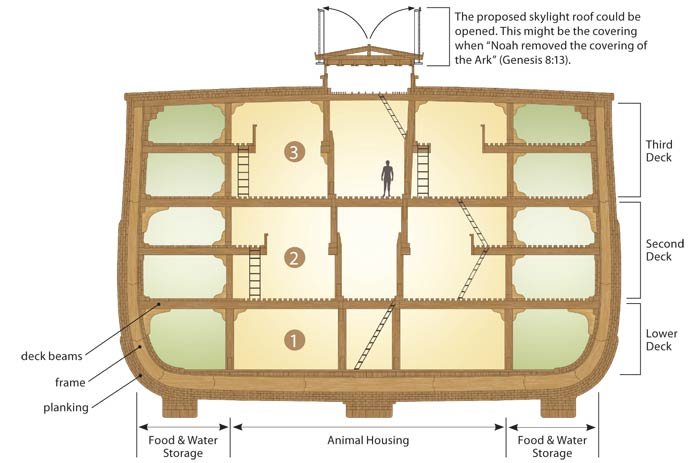 Genesis 6:16 instructs that the Ark is to be made “with lower, second, and third decks” (NKJV). In this version of the Ark’s interior, there are two levels that do not extend across the entire width of the ship. These half-floors are not separate levels.

Genesis 6:14 instructs Noah to “make rooms [nests] in the ark” (NKJV). These rooms or nests would simply be stalls and cages for the animals. 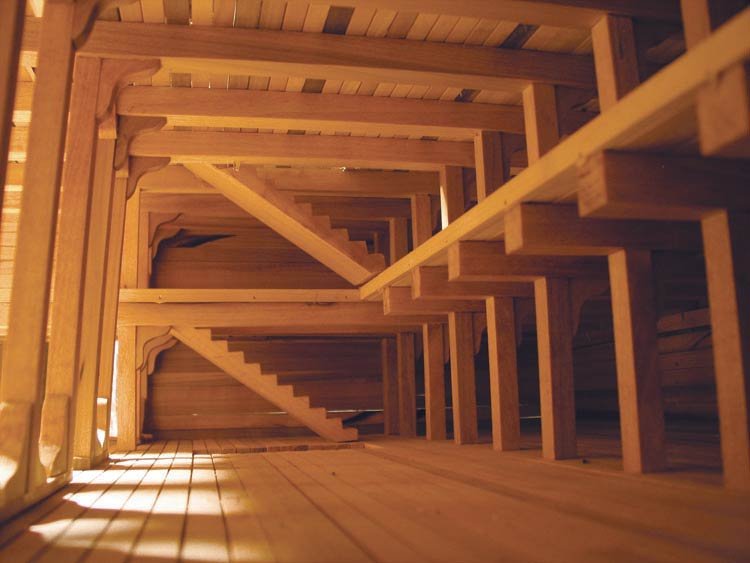 This scale model shows the effective design of Noah’s Ark. This second-floor model shows the extra half-floor within the three deck structure that could have been used for possible storage or animal housing.

Several staircases and ladders could be fitted throughout the Ark to gain quick access to another deck. Ramps near the ends of the hull (as seen in Thinking Outside the Box) could be used to get animals and heavy loads between decks.

Mezzanine levels improve access to food storage, utilizing gravity to supply grain and water to the animal enclosures below. Water could be directed in pipes (metal, wood, leather, bamboo, etc.) from tanks on upper levels.

The central skylight provides lighting and ventilation to the center section of the Ark. Slatted floors maximize airflow to the lower decks.