Houston, We Have a Problem

A number of people have asked us to comment on the words of a popular worship song that has come out of Hillsong United (a band associated with Hillsong Church), “So Will I (100 Billion X).” In particular, they have asked for our reaction to the second verse and its use of the words science and evolving. People are inquiring about the intent of the songwriter and the specific terms. Here are the words of this verse:

In an interview with Hillsong United, published on the Hope 103.2 website in July 2017, we read,

So [the song] is a journey of creation, and all the things in the world that were created by God and for God. And following along that line, the Bible talks about singing with creation. So for us it’s reminding ourselves, we’re a part of this journey [of creation] as well. We’re all singing out this one song.1

The song begins within the context of creation. In the same July 2017 article, we also read that Joel Houston (son of Hillsong founder Brian Houston) had a lot to do with the lyrics. According to the Hillsong.com website, Joel is a lead pastor of NYC, and he “is a Creative Director for Hillsong Church globally and he currently lives in New York City, where he is helping to build Hillsong NYC.”2 The July 2017 article says,

And Joel [Houston] is an incredible lyricist as well. Ben had this song, called Artisan, originally. It was a great song, and a lot of what’s in there now, was in there at the start. But Joel, as he does, took it and was like, “I feel like there’s more to this. God wants to say more in the song.”3

Much discussion has appeared on the internet about this song (e.g., “Not a Hillsong to Die on”4) and specifically about the reference to the word evolving in the second verse, and also the word science in the first line of the verse. Some people have suggested it implies that God used evolutionary processes to create. Others say the word is used in a more generic sense. There was even discussion on the song’s interpretation on social media associated with BioLogos. BioLogos is one of the main organizations trying to get the church to believe in evolution/millions of years (they mix the religion of humanism with Christianity).

So can we really know for sure what this word evolving means in context? We must admit when we read the words of many modern songs in the church, we’re not exactly sure what many of them mean—what the lyricists want us to understand—which, of course, is a problem in itself! What’s the point of singing something if we don’t know what it means?

Recently, Joel Houston was asked on Twitter about the meaning of the word evolving in the song. We think his response (below) makes it quite clear that he’s saying a person can believe in evolution/millions of years or six days of creation, but it doesn’t matter, as long as you believe in and worship our Creator God. Now if this is so, would we sing this song? Not at all. In fact, if our understanding is correct, then this song and what Joel has said about his composition, can, sadly, potentially influence thousands of young people with a compromised position on Scripture in Genesis.

Let us document this for you and explain our conclusion. 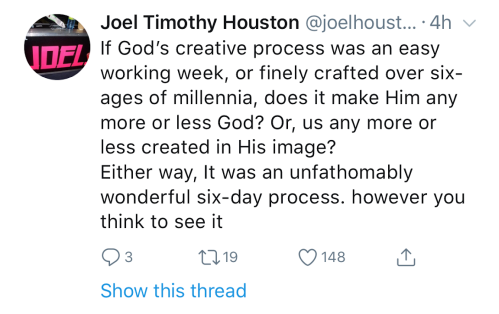 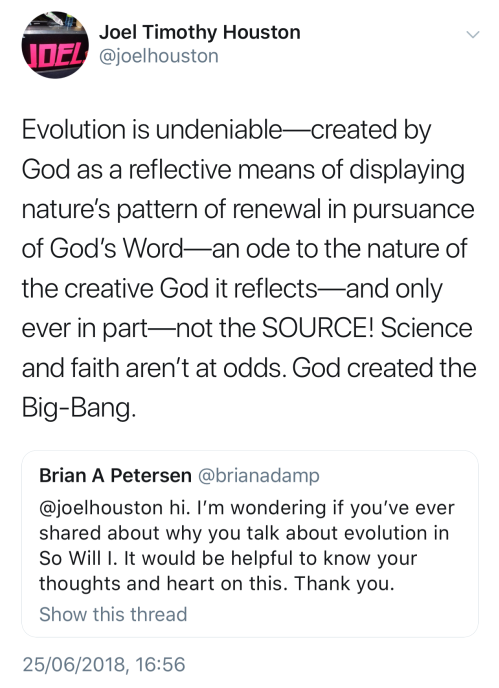 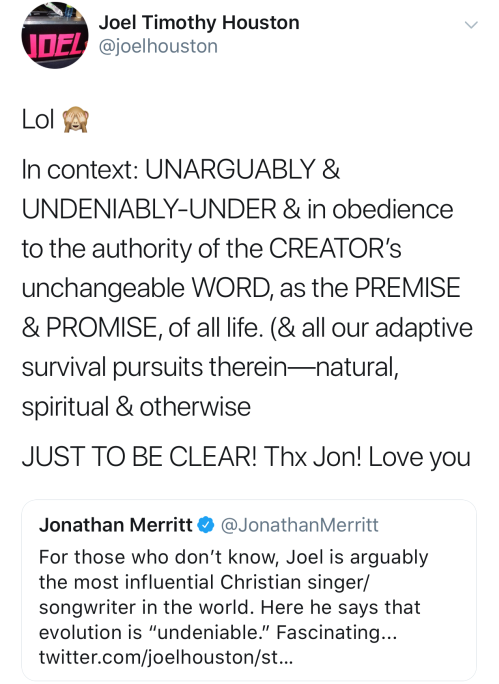 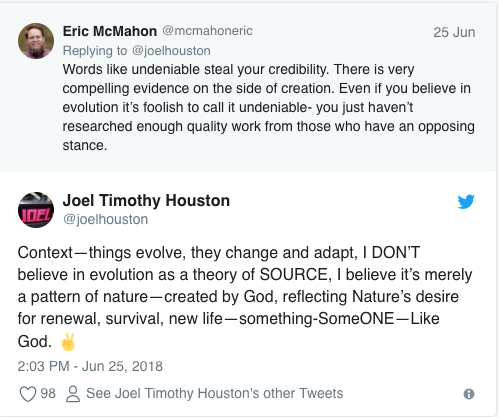 Here is our analysis of these tweets:

Because the wording in his tweets is somewhat cryptic (in fact, one might wonder if he’s being deliberately vague), it’s hard to know exactly what Joel Houston is saying. The context of his tweets seems to imply that you can believe whatever you want about the creation of the world. However, there’s enough in the tweets to convince us that Joel Houston did use the terms science and evolving in the second verse of the song to mean that God started the universe with the supposed big bang and that naturalistic evolutionary processes followed.

In other words, it’s a typical theistic evolutionary approach that compromises God’s Word in Genesis with man’s fallible ideas of astronomical, geological, and biological evolution.

Of all he’s said, however, he’s not saying that it’s important to believe Genesis as literally as Answers in Genesis does. After all, if you really believe in a literal account of creation as we do, you can say it in one tweet.

Discussions about this song and Joel’s tweets also made headlines in the Faithwire web article “Hillsong Worship Pastor’s Evolution Comments Spark Fierce Debate Among Christians.”5 The article references a tweet by musician Michael Gungor complimenting Joel Houston on his stand. (We wrote about Michael Gungor in the 2014 article “Award-Winning Christian Musicians Mock Biblical Creationists” after he denied the inerrancy of Scripture and attacked the biblical account of the flood.)

We’ve written many articles pointing out how destructive such an approach is to biblical authority and the gospel:

If Joel Houston would state in writing that he rejects evolution and the big bang and that he believes in a young earth and universe (approximately 6,000 years old) and that God created in six literal (approximately 24-hour) days, and if he would explain what he means by the words science and evolving in the song, we will gladly publish a correction. Also, I would like to publicly invite him to come visit the Ark Encounter and the Creation Museum, and I would gladly give him a personal tour.