Well, I thought I had heard every possible question about Genesis. But in Australia recently, questions were posed that made me think, “Well, I haven’t been asked that one before.”

I think you’ll be very interested in these questions and how I did my best to answer them. In fact, I must admit, after answering one of them, I said to myself, “I think that was a good response. I just need to remember how I answered that for next time!”

I pray for wisdom and ask the Lord to help me answer new questions, and I do believe he also helps me recall things I’ve heard or read.

I’ve been in apologetics ministry for more than 40 years. My first creation-apologetics talk was in 1975. Along the way, I’ve had so many media interviews, I can’t remember most of them—TV broadcasts, radio programs, and newspaper and magazine interviews across the globe!

In a sense, I have learned to deal with being thrown to the wolves in this Answers in Genesis ministry. I’ve had to learn how to answer the most-asked questions about Genesis, creation, evolution, Noah’s flood, moral issues, the gospel, biblical authority, and so forth.

It’s important to be aware of what’s happening in the culture and to be prepared for questions that haven’t necessarily been asked us before.

It’s important to be aware of what’s happening in the culture and to be prepared for questions that haven’t necessarily been asked of us before. It actually takes a lot of hard work to keep up on cultural things these days. But as an information-rich apologetics ministry, AiG’s spokespersons know it’s part of their job.

Indeed, we work very hard to equip people to be able to impact the culture for God’s Word and the gospel. And how I praise the Lord for all the specialists we have at AiG who can provide answers in so many different areas. For those of us who disseminate this information, the specialists make us look like experts!

Actually, being out of the office and teaching in churches and colleges and interacting with Christian and secular media certainly have honed our ability to answer new and sometimes difficult questions.

Over the years, every time I hear a question that I don’t know the answer to, I follow up with research, sometimes meeting with our resident scientists/theologians at AiG. We discuss the topic to ensure I can answer the question even better next time.

These questions have also been a great background for the various books that I (and many others at AiG) have written. Also, many of the different speaking presentations we give have come from these questions as we have researched them.

Then through books, DVDs, curricula, the internet, social media, and so on, we pass on these answers and information to you. That’s a big part of AiG’s ministry—helping equip God’s people so they can effectively witness to others and raise up generations founded in God’s Word, ready to do battle in this increasingly secularized culture. 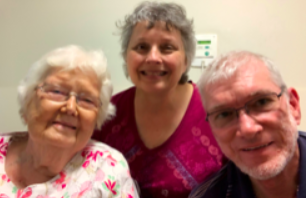 In March, Mally and I visited Australia to speak at conferences in Sydney and Hobart (Tasmania) as we build up the AiG ministry Down Under. Of course, we spent time with my 91-year-old mother who has 24-hour care in a nursing home. She’s still very sharp but looking forward to shedding her deteriorating body to be with the Lord for eternity. She reminded me that she prays for us (and for all her family, including 48 great-grandchildren) every day.

As happens a lot when I speak in the USA (and other places around the world), I met people in Sydney and Hobart who shared great testimonies of how the AiG ministry has influenced them.

One man told me he was born the year we moved to the USA (1987). His parents had AiG resources and had heard me speak, so he was brought up on AiG material. Because AiG’s resources impacted his life, he brought his daughter to the conference so she could be equipped too!

Another man, with tears in his eyes, told me he couldn’t begin to explain the phenomenal impact AiG had on him and his family. And then a young college student told me how AiG teaching was key to his becoming a Christian. I also met a number of college students who said they were using AiG resources to boldly reach others for the Lord on their campuses.

I thought you would enjoy hearing about an interview I had with a reporter for a Christian media group in Australia. Sometimes when I read articles in newspapers and websites, I’ll say to myself, “I didn’t know I believed that!” The media outlet, called Eternity News, heard I was speaking at a conference in Sydney and contacted the church to ask if a reporter could talk to me. The reporter called me a couple of days later, and I spent nearly an hour on the phone with her. I wasn’t able to record the conversation, but I took careful notes and compiled them to the best of my ability.

I wasn’t surprised that it didn’t take long for her to ask a question about whether I believe someone has to believe in six literal days and a young earth to be a Christian. I emphatically stated that salvation is not conditional on the age of the earth or the six literal days, but on faith in Christ. I explained why it’s really a biblical authority issue, and I gave her many examples of how incompatible millions of years is with Genesis.

But then she asked a question that I must admit I have never been asked before, “Can you love theistic evolutionists?” I answered her question with three main points:

The reporter asked me many other questions, and she got to the topic of climate change. Now, I would say that this was the only time during the interview when I believe things became somewhat contentious with this Christian reporter. (Climate change can be an emotional topic.)

First, I told her there’s been climate change ever since the flood. I said I didn’t deny climate change, but the details as to why it’s happening and how serious it is (or isn’t) were matters that needed to be discussed. I referred to one of the articles in our Answers magazine where a scientist shows that there have been warming and cooling periods in the past and that our current (quite small) warming trend could be a normal fluctuation.

I further explained that we don’t have enough data to know for sure what has really been occurring. I added that scientists know the sun’s activity has a significant effect on climate change and that the main greenhouse gas is not actually carbon dioxide but water vapor.

Then it became a bit tense. I said that if you ask most people who are climate change alarmists (including most young people) to explain the data and give the facts behind what they’re claiming, most have no clue. They just regurgitate what they’ve heard.

She then said something to the effect that she didn’t need to do that. The reporter said that she could rely on the experts who have done the research. I replied that this is not the correct approach and that as Christians, we all need to search things out and be prepared to give reasons (1 Peter 3:15) for what we believe.

I told her my father wanted his kids to know why we believed what we did—and wanted us to be able to defend our beliefs. She then essentially accused me of refusing to accept what the majority of scientists are saying: that man-made climate change is a big problem.

Should we then say we have to reject God because the majority of scientists say so?

I also explained that after the Flood, God told Noah, “While the earth remains, seedtime and harvest, cold and heat, summer and winter, day and night, shall not cease” (Genesis 8:22). She responded with, “Are you saying we should do nothing then?” Well, of course I wasn’t saying that. I responded that God gave man dominion over the environment, not the environment over man, and that Christians should have a biblically based worldview in regard to environmental issues. We should responsibly use the creation for man’s good and God’s glory.

I gave an example that in the USA, trees are harvested for various reasons, but more trees are planted than are harvested. I also said that we need to understand how sin and the curse of Genesis 3:15 have affected the world.

“My people are destroyed for lack of knowledge” (Hosea 4:6)

I recalled the verse, “My people are destroyed for lack of knowledge” (Hosea 4:6).

Actually, that’s a major problem in the world and in the church! One of the reasons so many young people are being led astray by evolutionary ideas, climate change alarmists, abortionists, the LGBTQ movement, and so forth is that they have been told what to believe and not taught how to think about such issues or look at all the evidence available. Thankfully, the interview overall was not too negative, though it seemed our interaction on climate change became a focus of disagreement, which I anticipated. You can read the article on their website.

I thought I would relate all this to you this month just to remind all of us that we need to raise up generations who have been taught how to think correctly and give them as much information as possible, so they won’t be brainwashed by the world. There’s been too much laziness in our churches and homes to teach fluff-and-stuff stories and let the world brainwash our kids in secular ideas. We need to wake up the next generation and teach them to think critically, from a biblical foundation.

AiG has always been a great reservoir of information. From that reservoir, all kinds of channels distribute apologetics and evangelistic teaching to as many people as possible. These resources and information are available to you in our online store and our website, which help equip you to spread the truth of biblical authority and the good news of the gospel.

Thank you for your ongoing prayers and financial support!