At one time in the past, the people of the United States generally knew who ruled over the affairs of men—the Creator God of the Bible. They even put His name on their coins and currency. In just one generation that attitude has changed. What happened? 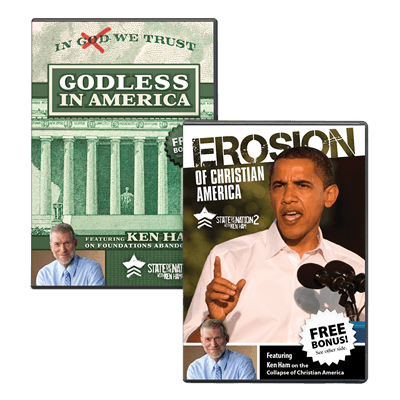 This double-DVD pack contains both of Ken Ham’s recent talks on the State of the Nation, “The Collapse of Christian America” and “Reminders Removed.”

The entire western world is changing. Whereas the West was once permeated by Christian thinking, with a predominantly Christian worldview in regard to morality, there has been a dramatic shift.

Why has this change occurred? What are the foundational reasons for such a dramatic shift in worldviews?

These same changes (and many more, such as the removal of Christian symbols from public places) are occurring and gathering momentum in what was once considered the greatest Christianized nation on earth—the United States of America.

The changes in America are fundamentally the same as in the rest of the Western world. So in understanding what is happening in America, one can understand why this dramatic shift is occurring in so many countries.

In 2006 at Call to Renewal’s “Building a Covenant for a New America” conference, then-Senator Barack Obama stated: “Whatever we once were, we are no longer a Christian nation; we are also a Jewish nation, a Muslim nation, a Buddhist nation, a Hindu nation, and a nation of nonbelievers.”1

He repeated this same message in his book The Audacity of Hope2 and later in his inauguration address.3 During a trip to Turkey in early 2009, President Obama reiterated a similar message to Turkey’s Muslim president:

There is no doubt that President Obama is declaring that America has fundamentally changed. But what is the change he is referring to?

The essence of the change can be summed up with another quote from him. President Obama formally declared:

Now, therefore, I, Barack Obama, President of the United States of America, by virtue of the authority vested in me by the Constitution and the laws of the United States, do hereby proclaim June 2010 as Lesbian, Gay, Bisexual, and Transgender Pride Month. I call upon all Americans to observe this month by fighting prejudice and discrimination in their own lives and everywhere it exists. . . . Barack Obama.5

At a Human Rights Campaign dinner in 2009, the president stated:

The change from a worldview that viewed marriage as a special union between a man and a woman, to one that redefines marriage as a relationship between any two individuals (man and man, or woman and woman) really sums up the change the current leader of the U.S. is referring to. It is really a change from building one’s thinking on the Bible beginning in Genesis (where we learn about the origin of marriage when God made the first male and female) to a worldview in which mankind can determine new definitions of marriage.

What Led to This Change?

Change in America reflects a shift from Christianity’s absolutes to the relative morality of human opinions.

In essence this change reflects a shift between the world’s two opposing religions. Ultimately there are only two religions—one starts with God’s Word and the other starts with man’s word. America—and the whole Western world—once built its worldview predominantly on the Bible. Now a shift has occurred, as the West’s worldview is being built on man’s word. This change is reflected in a shift from Christianity’s absolutes to the relative morality of human opinions.

A historic transition is occurring, barely noticed. Slowly, quietly, imperceptibly, religion is shriveling in America, as it already has in Europe, Canada, Australia, Japan—across the developed world. Increasingly, supernatural faith belongs to the third world. The first world is entering the long-predicted Secular Age, when science and knowledge dominate.7

The president of the United States, the secular humanists, and Christians all recognize the change. However, is this change positive, as the secularists trumpet and as the U.S. president proclaims?

Sadly, this foundational change is affecting hearts and minds in regard to eternal matters. Fundamentally the secularists have captured the hearts and minds of generations of kids (for example, two-thirds of young people from church homes will leave the church by the time they reach college age8). They have secularized their thinking by changing their starting point from God’s Word to man’s word—thus changing their worldview. After generations of such change, we now see the effect on the changing worldview of the whole culture.

The major way this change has occurred is through the education system and media, which teach that evolution over millions of years is fact, causing many young people to doubt and ultimately disbelieve the Scriptures. Sadly, much of the church aided this change by endorsing millions of years and evolutionary ideas, while trying to instill a Christian worldview in other areas (such as Christian morality, marriage as one man and one woman, and abortion as murder).

Whatever we once were we are no longer! These words really mean that America as a nation no longer builds its thinking on God’s Word, but man can determine truth for himself. America has changed religion—from Christianity to a man-centered religion. This spiritual disaster is now reflected in this nation’s economic and moral disaster.

So What is the Solution?

Whatever we once were we need to return to. The only solution for this nation (and every other nation) is to return to the authority of God’s Word as the foundation for our individual and cultural worldviews.

As Psalm 11:3 states, “If the foundations are destroyed, what can the righteous do?”

State of the Nation Video Clip