The “Evolutionizing” of a Culture

We are engaged in a war of worldviews. Secular humanism is fighting tooth and nail against biblical Christianity for the hearts and minds of our children.

We are engaged in a war of worldviews. Secular humanism (with autonomous human reason as the authority that leads to evolution and millions-of-years foundation) is fighting tooth and nail against biblical Christianity (with God’s Word as the authority that reveals creation and a global flood) for the hearts and minds of our children. Over the past generations, we’ve seen the battle increase and intensify.

There’s no doubt America was founded on Christian principles based on the Bible. In fact, just two generations ago, the majority of Americans supported prayer, Scripture readings, and Bible instruction in public schools. Britain’s Common Law also was founded on biblical authority. In both countries, people also supported displaying nativity scenes, crosses, and the Ten Commandments in public places. Gay marriage and abortion were outlawed.

Today, however, it is very obvious that the population as a whole does not see the Bible as the absolute authority it once did. For instance, pollster George Barna found that in the United States, “A minority of born-again adults (44 percent) and an even smaller proportion of born-again teenagers (9 percent) are certain of the existence of absolute moral truth.”1 Similar surveys in the United Kingdom reveal even lower percentages.

So what has happened? Why the dramatic change? Why is the moral position of previous generations being outlawed more and more? What has driven this moral collapse? Why is this war going on?

Whereas Christian thinking once permeated the public education system, today the Christian God, prayer, Bible study, and biblical creation have all but been excluded from the system. Now, generations (including the majority of students from church homes) are being trained in a secular (anti-God) religion.2 They are being indoctrinated to believe that the universe—and all that exists within it—can be explained without God.

They are taught, with increasing intensity, a cosmology, geology, biology, and anthropology that are all evolutionary. In essence, these students are being educated against the truth of the Bible’s history in Genesis, and thus, against its message of salvation and absolute moral standards.

Not only are our schools indoctrinating our children this way, but so is the media. Television shows, movies, comic books, ads, and so on are all laced with evolutionary thought, subtly (and not so subtly) reinforcing the idea that we are nothing but evolved pond scum, the result of billions of years of natural processes. Just a few examples of this should suffice: the more highly evolved “X-Men” and the “millions of years” taught in Jurassic Park and Dinosaurs. Magazines such as Time, Nature, and National Geographic often have cover stories touting evolution as fact. And who can ignore the many cable channels, such as Discovery Channel, The Learning Channel, and Animal Planet, which regularly broadcast shows on animal and human evolution?

Children, ages 2 to 17, spend an average of 19.4 hours watching TV each week (Nielsen Media Research, 2000). And this doesn’t include the time spent going to movies, playing computer games, surfing the Internet, or reading comic books and magazines. Our children are inundated with messages from the media, which by and large have an evolutionary, anti-Christian foundation.

In the United States, there are approximately 400,000 churches and 6,000 first-run theaters. Which do you think affects our culture more? Unfortunately, the Hollywood writers and producers have more influence on our youth today than our pastors and Sunday school teachers. 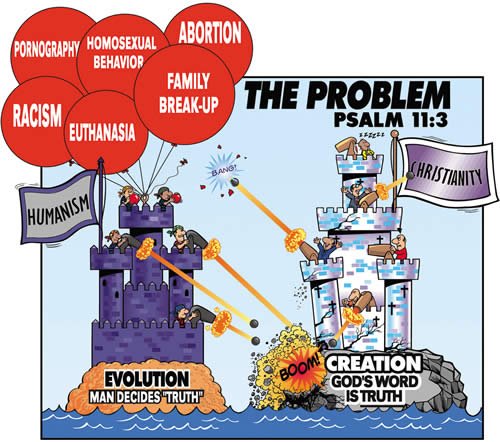 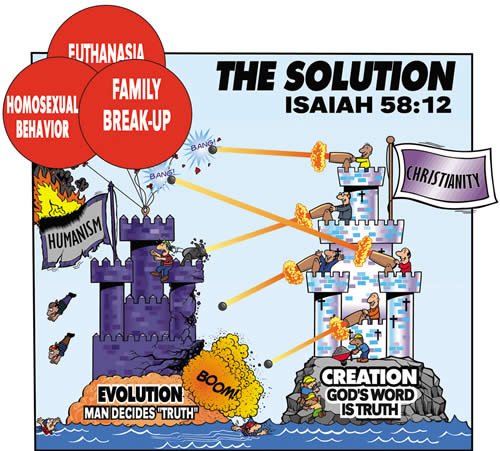 Sadly, most Christian leaders in the church have added ammunition to the other side by compromising with evolutionary ideas (either wittingly or unwittingly); they have added millions of years to the Bible, and many teach that evolution and Christianity are compatible. These leaders have, in effect, helped this takeover and fueled the culture war. What has resulted is that recent generations have begun to reject or reinterpret the Bible’s history in Genesis, thus opening a door to undermine biblical authority in general for the other 65 books of the Bible.

The more that generations are trained to disbelieve the Bible’s account of origins, the more they will doubt the rest of the Bible, as all biblical doctrines (including marriage) are founded (directly or indirectly) in the history in Genesis 1–11. We see the direct result of this doubt and compromise reflected in the increasing number of moral battles concerning gay marriage, abortion, and so on. Again, the more people believe evolution and reject Genesis 1–11 as history, the more they will reject the rest of the Bible—including the morality that is based in that history.

Secularism, with its moral relativism, is in direct opposition to Christianity and its absolute morality. The battle is between these two worldviews—one that stands on God’s Word and one that accepts man’s opinions.

What will be the outcome? Can the West return to a Christian worldview that will once again permeate the culture? Yes, it can, but only if there is a return to the authority of the Word of God . . . beginning in Genesis.

We cannot just tell people, “Jesus loves you and has a wonderful plan for your life.” The world has questions and we need to give them answers. We need to show skeptics that the Bible relates to the real world—that a biblical worldview addresses biology, astronomy, history, and anthropology. We need to help our children build their worldview on the Bible and equip them with answers for their teachers and friends. We need to take action to halt the desertion of children from their faith after they leave home.3

Christians who are fighting for a return to biblical morality cannot hope to win the “war of the worldviews” and will only continue to see the erosion of this once-Christian culture unless they understand the real foundational nature of the battle: biblical authority, beginning with God’s Word in Genesis, must be upheld without compromise.

The secular world itself understands the battle—but the Church, by and large, does not. Christian leaders need to be awakened by a battle cry. We need to attack the false foundation of autonomous human reasoning that leads to evolution and millions of years, and proclaim that God’s revealed Word is authoritative and its history of the world is foundational to Christian morality and the gospel of Jesus Christ.

Next Chapter Can Natural Processes Explain the Origin of Life?