Were Zigzag Legs an Evolutionary Adaptation for Flight?

by Dr. Elizabeth Mitchell on May 4, 2013
Share:
Email Using:
Gmail Yahoo! Outlook Other

Birds are bipedal, as anyone can see at a glance. Most use their wings to fly, but they never use their wings to walk. When birds walk, they walk on a pair of zigzag hind legs that position a relatively short femur (thigh bone) more or less horizontal to the ground. To walk upright, a bird’s legs must zigzag sharply to keep its center of gravity above its feet.

Bird bipedality contrasts markedly with human bipedality. The human center of gravity is above vertical legs. Bird legs, however, must bend sharply to support the heavy upper body with massive pectoral muscles and heavy wings when walking. Evolutionists wonder how bird legs evolved that strange zigzag. A computer modeling study just published in Nature purports to answer that question.

“It’s more efficient to bear weight passively, in a straight line down your long bones [like] a pillar,” said lead author Vivian Allen. “In a crouch you have to use your muscles a lot more to resist gravity. Think about how much easier it is to hold something when you’re standing up straight than it is when you are crouched down. So if you were designing an animal, this seems slightly odd from the perspective of mechanical principles.”1 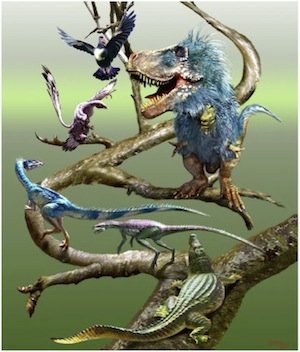 The sharp bend in bird legs enables them to support their comparatively heavy upper bodies while walking. This imaginative illustration depicts the supposed evolutionary ancestry of birds. A new study in Nature uses computer models to suggest the zigzag in the hind legs was key to evolutionary progress and the origin of flight. Image courtesy of Luis Rey through news.nationalgeographic.com.

Allen’s team computer-modeled virtual bodies for chickens, several extinct birds (Microraptor, Archaeopteryx, Pengornis, and Yixianornis), Velociraptors, Tyrannosaurus, and crocodiles (which evolutionists believe to be the closest living relatives to birds). They analyzed the biomechanical features of those animals and noted that bipedal animals with comparatively heavy upper bodies (like birds) tended to be crouched. This was true whether the animals in question were living birds, extinct birds that everyone agrees were birds (like Pengornis and Yixianornis), extinct birds that evolutionists have re-classified as non-birds (like Archaeopteryx), or extinct birds that evolutionists consider to be dinosaurs (like Microraptor). Animals with big heavy tails and less upper body mass (like Velociraptor, Tyrannosaurus, and crocodiles) didn’t crouch so much.

Having noted that each sort of animal in the study was well-designed to support its weight with just the right amount of zigzag in the hindquarters, Allen’s team concluded that the trend in zigzag legs was an evolutionary adaptation that enabled non-flying animals to evolve into flying ones.

“Our results suggest enlargement of the forelimbs was more important to the forward shift in center of mass than loss of the tail,” Allen says.

“The tail is the most obvious change, if you look at dinosaur bodies,” adds coauthor John Hutchinson, an evolutionary biomechanist. “But as we analyzed and reanalyzed and punishingly scrutinized our data, we gradually realized that everyone had forgotten to check what influence the forelimbs had on balance and posture, and that this influence was greater than that of the tail or other parts of the body.”

“One of the interesting things that our work shows is that birds could not have evolved these large forelimbs, these wings, without also having to make significant changes to the anatomy and function of their hindlimbs,” Allen explains. “Which makes total sense, when you think about it—everything is attached to the same body, so why wouldn’t changing one thing affect the others? But still, it was cool to find that, and to have some actual numbers and stats to back it up.”

Does the timing match what evolutionists maintain about when birds evolved? They’re not sure, but Allen says, “There were gradual changes early on in dinosaurs, but we were amazed by how much the increase in forelimb size began altering the center of mass just before when flight may have first evolved in early birds and their closest relatives.”

Evolutionists also need to postulate some reason other than flight for evolving heavy pectoral muscles and powerful forelimbs, since the anatomy would have had to be in place before evolving birds could get off the ground. Therefore, Hutchinson speculates they may have found such awkwardly heavy forelimbs useful “for reasons other than powered flight, such as prey capture or negotiating complex terrain.”

What they actually demonstrated is that all the animals in question were well-designed.

Evolutionists who believe that birds evolved from dinosaurs and crocodiles have focused much of their attention on figuring out how these reptilian creatures could have gotten rid of their big heavy tails. This analysis focused on the question of how birds evolved the posture to support heavy wings and the massive muscles that support flight. And the researchers concluded that the evolving posture was even more important than getting rid of the tail. But what they actually demonstrated is that all the animals in question were well-designed.

The computer model’s ability to note that each kind of animal in question is biomechanically suited to support its weight in the posture it likely used to walk is fine evidence for “intelligent design” but is not evidence at all for evolution. Variations in common designs do not imply evolutionary ancestry. The evolutionary lines “connecting the dots” between these creatures are imaginary.

Bird posture is well-designed to support heavy upper bodies by positioning the center of gravity over the feet using what Allen considers an awkward mechanical design—a design that obviously works very well. In fact, that bird design has been working well for about 6,000 years, ever since God designed all the original kinds of birds on the fifth day of the earth’s existence.