People keep pet birds for all sorts of reasons—their pretty colors, lovely songs, grace in flight, and curious manners. But Dan Breeding keeps his pet for a very different reason. Buzz reminds us that birds are useful for much more than beauty.

Vultures are possibly the creepiest birds on the planet. Between their scaly heads and their gruesome diet, they are often avoided and even feared. Who wouldn’t fear something that eats dead animals?

This narrow view makes us overlook many of the vulture’s special designs, a point that I make when I teach audiences about my lesser yellow-headed vulture named Buzz. God designed Buzz and his relatives to do what they do, and they do it well.

What is a vulture’s job? They find and eat what I call “road pizza.” They basically help keep the environment livable by limiting the build-up of dead animals and the spread of disease. God carefully designed vultures, giving them the needed tools to find, digest, and keep clean after eating dead animals. 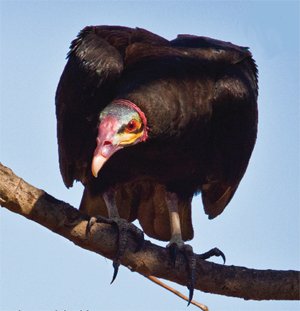 Vultures have very sharp eyesight. Even perched high above the ground, they can see everything below them.

Most meat-eating animals can find their dinner because it is mobile. Movement makes finding things easier. Have you noticed that when someone walks through your peripheral vision, you are acutely aware of it? But if you’ve misplaced your keys, it can take hours before you find them. God gave Buzz and vultures like him two special designs to help them find their motionless dinner—keen eyesight and an extraordinary sense of smell.

Vultures have very sharp eyesight. Even when they are soaring high above the ground, they can still see everything below them. God even provided them with sunglasses to protect their eyes against the sun’s harsh light. Vultures have dark lines around their eyes, which work the same way as the dark lines underneath a football player’s eyes. The dark color absorbs sunlight, reducing glare. This way vultures don’t have to worry about missing a single detail.

The lesser yellow-headed vultures have another advantage over most birds: a keen sense of smell.1 Their nares, or nose openings, look like holes in their beak. Wind from any direction funnels through the nares, which leads to the largest amount of sniffing possible. Each breeze is loaded with information, so God equipped these vultures with a very large olfactory lobe, able to handle all that information. 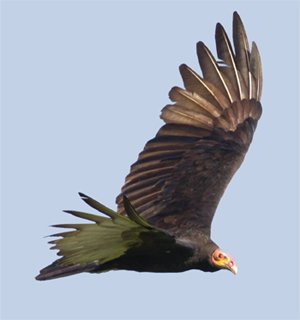 With the help of its keen eyesight and smell, the vulture rides on waves of air, called thermals, hunting for its next helping of pizza.

Once the vultures find their dinner, how can they possibly eat it? Most other animals would get sick from eating dead animals. Why don’t vultures get sick all the time?

God gave them a very special digestive system. The acid in their crop (which functions like our stomach) is one of the strongest in the natural world. Strong enough to kill the harmful bacteria found in their dinner, it keeps them from getting sick from pretty much anything!

In fact, vultures can use their digestive juices to defend themselves. If you were to startle a vulture while it was eating, you’d better back up quickly—vultures will vomit on you if you’re not careful. Vomiting not only makes them lighter (so they can more easily escape), but with the addition of the digestive acid, their lunch now smells much worse.

Vultures keep the environment clean of disease, but how do they keep themselves clean?

Vultures don’t have feathers on their heads. This baldness is why Buzz is known as a yellow-headed vulture—his head is covered in yellow skin. This lack of feathers helps the vulture keep clean in several ways.

First, it prevents feathers from getting dirty when vultures eat. They will often get their dinner all over their heads, and skin is much easier to clean up than feathers. This baldness is also true of their legs and feet. Since vultures don’t have hands, their meal tends to get messy, but since there aren’t any feathers in the way, cleanup afterwards is much easier.

But how do vultures wash up?

God carefully designed vultures with all the needed tools to find, digest, and keep clean after eating dead animals.

Vultures spread their wings out in the sun to warm themselves, while they pick away food particles with their beaks (called preening). With their wing feathers spread, they also let rain remove extra food particles.

When they are done eating, they find a nice perch and turn their backs to the sun. The black feathers on their wings absorb and channel heat to their heads, killing any bacteria that might have been picked up.

Cleaning their legs and feet is another story. Vultures have very long tail feathers that keep their legs and feet covered, so they can’t get baked clean. Instead, they can release urine down each leg. Vulture urine is very acidic, capable of killing bacteria.

Now, a final question that often comes up when talking about vultures. You may have even wondered about it when you began reading the article. What did they eat before the Fall (Genesis 3)? Before sin, there was no death, so there would be no dead animals for vultures to eat. The honest answer is that we don’t know yet. God could have provided for these designs to be used only after the Fall, or vultures could have adapted to their new world. Or it could have been a mixture of both.

But we do know that God continued to provide humans with evidence of His loving provision, even after the Fall. The design of vultures may seem disgusting, but they keep our sin-cursed world clean. So the next time you see a vulture circling, just remember this: if he didn’t grab a slice of that road pizza, who else would?

LENGTH: 21–26 inches (53–66 cm)
WINGSPAN: 59–65 inches (150–165 cm)
DIET: Eats dead animals, not severely rotten ones. Occasionally will eat live fish, as well as amphibians, insects, and other invertebrates.
HABITAT: Lesser yellow-headed vultures live in savannas, grasslands, and marshes in Central and South America. Their territory ranges from Argentina and Uruguay to as far north as Mexico. Other vulture species can be found on the other continents, too, except for Australia and Antarctica.

Dan Breeding and Buzz the Vulture