When it comes to cleverness, you can’t beat these bird brains.

That pint of chocolate ice cream at the store was calling your name. So you take it home, and when no one is looking, you bury it in the freezer under the bags of peas and broccoli, hoping to eat it before someone else finds it. You think you’re clever, but did you know that some birds called scrub jays also hide their food when no one else is looking?

Scrub jays are members of the corvid family of songbirds, along with crows, ravens, rooks, jays, magpies, and nutcrackers. Four species of scrub jays live in North America: the Florida scrub jay, the California scrub jay, Woodhouse’s scrub jay, and the island scrub jay, which inhabits only Santa Cruz Island off the southern coast of California.

Scrub jays live in woodlands and brushland habitats where they nest in the spring and summer. They feed on acorns, seeds, fruit, eggs, and small creatures, such as insects, mice, lizards, and small birds.

These birds are considered one of the most intelligent species of the bird kind, which God created on day five of creation week. In our now-fallen world, scrub jays use their God-given cleverness to outwit other birds and predators. In fact, their slick moves make “bird brain” seem like a compliment. 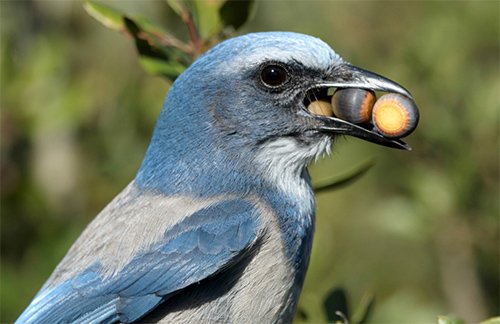 The scrub jay has a special beak for breaking open acorns, which it gathers by the thousands each year.

For their body size, corvids’ brains are the largest of any in the bird family. In fact, relative to body size, their brain is the same size as an ape’s. Studies have shown that, like primates (such as monkeys and apes), corvids excel at learning a general rule to solve a task and then transferring that rule to a new task. For example, when observed by potential pilferers, scrub jays who have pilfered food items from other scrub jays take further protective action by moving their caches to different unobserved locations.

The size of a bird’s prefrontal cortex (the outer, front layer of the brain) and the number of neurons packed into that part of the brain can determine a bird’s intelligence. Songbird brains contain about twice as many neurons as primate brains of the same mass. In corvids, the neurons are much smaller and more densely packed than neurons in mammalian brains. Plus, the proportion of neurons in their forebrains is also significantly higher, indicating a greater level of intelligence.

Who, What, Where, and When?

Recent experiments on two species of scrub jays in the western United States (Woodhouse’s and California) showed that these birds have the ability to remember the who, what, where, and when of specific past events. That means they can recall where they cached a food item and who, if anyone, was watching them do it. In scientific jargon, this is called episodic memory.

Until these experiments, scientists thought that only humans had the ability to remember specific, detailed events in the past. But scrub jays can remember where they store thousands of seeds during a single season—up to 200 different hiding spots. They retrieve that food in winter and early spring when fresh food is sparse. They can also adjust their caching behavior with future needs in mind. For instance, when they retrieve the stashed food, they return to the items that might spoil first (such as larvae).

Scrub jays also demonstrate theory of mind, the ability to consider what others are thinking. For instance, if another bird observes them caching, scrub jays often pretend to bury the seed or nut but then move the food item several times until they think it is safely hidden. This indicates their ability to recognize that the other bird is thinking about pilfering the food.

Birds of a Feather

As another indication of their superior intelligence, scrub jays are also among the most social bird groups. They participate in cooperative breeding, meaning that several closely related family members share the responsibility of raising the young. This endeavor requires a high degree of social cooperation. Anyone who has helped care for a new baby can relate.

These brainy birds also watch out for each other while foraging and feeding in groups. Scrub jays post a sentinel, or lookout, and take turns watching for predators, enabling the other members of the flock to forage with greater concentration and less danger of being captured by a predator.

The high intelligence of birds like scrub jays presents a challenge for evolutionists. Darwin saw humans at the pinnacle of evolution and all other creatures as less advanced. Until recently, no one expected that birds, so completely distant from mammals on the evolutionary tree of life, would prove to have brains comparable to the brains of primates, which evolutionists believe to be most closely related to humans. To explain how similar designs arise, evolutionists argue that evolution keeps producing the best designs—sometimes the same designs—with whatever material is available (called convergent evolution). But this is just special pleading, not an explanation for the impossible process necessary to produce such marvelous designs in incremental steps.

We know that God has given scrub jays the right amount of reasoning power to survive and thrive. If he provides for the birds, how much more will he take care of us?

Look at the birds of the air: they neither sow nor reap nor gather into barns, and yet your heavenly Father feeds them. Are you not of more value than they? (Matthew 6:26) 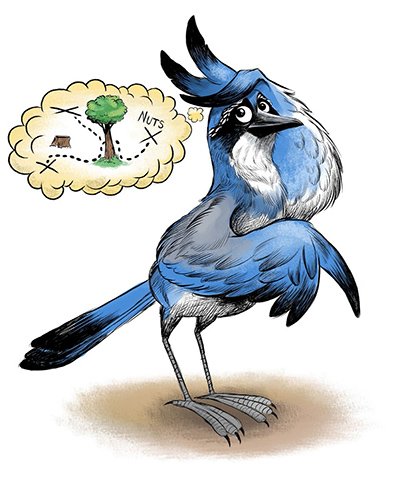 If scrub jays detect a predator such as a hawk, owl, or large snake, they will mob it, scolding loudly. Scolding attracts other jays in the vicinity as well as other small bird species. Mobbing may include nipping at a sitting hawk or owl or biting the tail of a retreating snake, driving the predator away.

Because of their hardness and shape, acorns are difficult for birds to open. Scrub jays, however, can easily crack acorns thanks to a specialized jaw support and beak shape.

For their body size, corvids’ brains are the largest of any in the bird family.

Scrub jays avoid eating noxious insects by trial and error. Once they learn which insects are distasteful, the birds avoid the noxious ones. 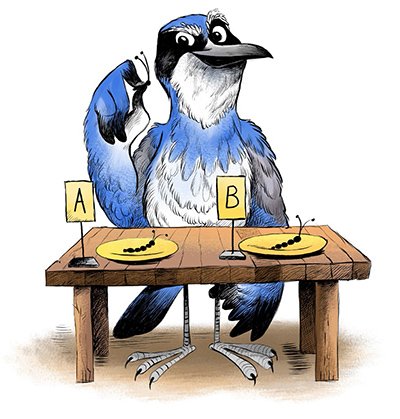 Donna O’Daniel earned her MA degree from the University of Texas (Austin) in biological sciences. She has worked as a wildlife biologist in Johnston Atoll, the Northern Marianas, Madagascar, and in numerous US states.
Next Article What Can We Learn about God from Creation?