There’s more to this funny-looking fowl than meets the eye.

Swans are often associated with elegance, eagles with majesty, and owls with wisdom, but not every bird seems quite so respectable. Every class has a clown, and birds are no exception.

Puffins look like the quintessential clown of all avians. In fact, their most common nickname is “the clown of the sea.” Everything about them seems ridiculous—at first glance.

But come a little closer to this farcical fowl, and you’ll see customized designs delivered by a conscientious Creator when he created the shorebird kind (to which puffins belong). Looking silly doesn’t mean lacking skills, and being goofy doesn’t preclude God’s thoughtfulness. There’s more to the puffin than meets the eye, and each detail points to the all-knowing, all-wise Creator.

By just about anyone’s estimation, puffins are funny looking. Their wings are short for their body size. Their feet look like brightly colored clown shoes. Their beaks sport vibrant stripes. But their feathers mostly come in two shades—black and white. Why such a mismatch in the puffin’s coloration? Because both drab and daring colors serve very important purposes.

Puffins spend most of their life adrift at sea, bobbing among the waves. The black feathers on their back make them hard to spot and provide camouflage from flying predators. The white feathers along their bellies camouflage them from swimming predators. When a fish looks up at the surface, the sunlight reflects so brightly that all it can discern are shadows, which puffins’ white feathers hide. Two-toned camouflage is just what puffins need.

Their brightly colored beaks serve the same purpose as other birds’ colored feathers.

Their brightly colored beaks serve the same purpose as other birds’ colored feathers. While some birds dance to gain the attention of potential mates, puffins show off their fabulous beaks. Ornithologists (scientists who study birds) recently discovered that puffin beaks glow under ultraviolet light, lending an extra flash of attraction for “lovestruck” puffins during a mating behavior called billing. During billing, male and female puffins rub and clack their beaks together to show interest in each other or to greet their mate after a long separation. 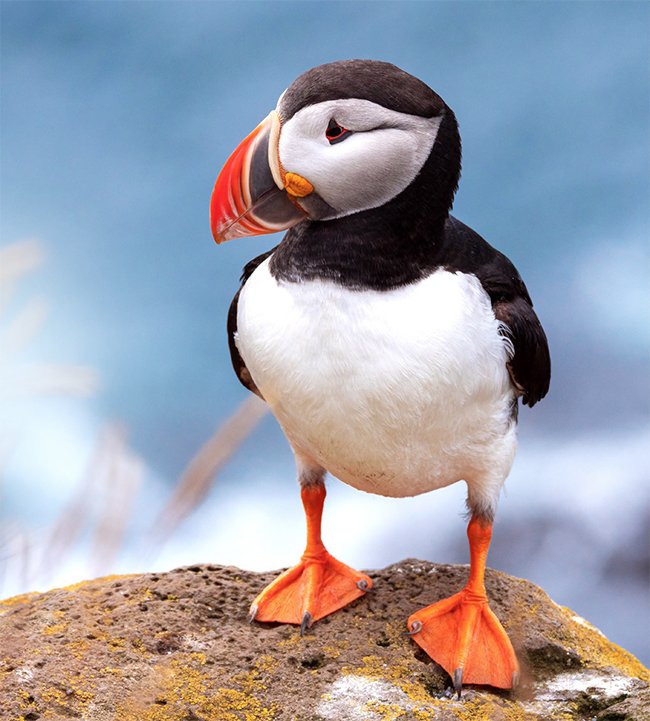 What could be more birdlike than flight? Falcons swoop down for their lunch. Hummingbirds zip through the air, beating their wings 10–15 times per second. But puffins . . . well, puffins don’t do any of that.

Atlantic puffins have wings that are on the shorter side compared to other birds, with a wingspan of only 19–25 inches (47–63 cm) for their body length of 11–12 inches (28–30 cm). To take off, puffins must take a running leap. By beating their wings 400 times per minute, they can still fly an impressive 55 miles per hour. Their real specialty, however, is swimming.

Using their wings as paddles and their feet as rudders, puffins swim fast and dive deep. They’re such fast swimmers, in fact, that in one dive they can catch a mouthful of fish in under a minute. Puffins are formidable hunters, feeding mainly on herring, sprats, capelin, and any small fish they can get into their beak. One puffin was spotted catching a record 62 fish at one time. 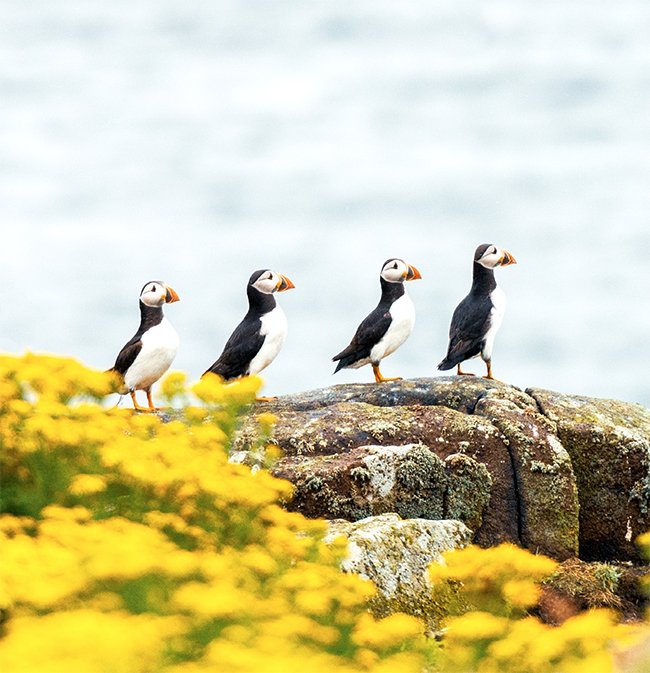 We don’t tend to assume much intelligence of an animal that appears silly, but the puffin is no birdbrain. After spending over half the year alone, floating and fishing out at sea, the puffin will find its way back to the same breeding colony where it hatched. Not only that, but it returns to the same mate—and even the same burrow. The dedicated puffin will only desert its burrow if it is pushed out by a younger, more aggressive puffin, or if the burrow collapsed during the winter.

Researchers observed puffins picking up sticks to scratch their underbellies in places their beaks could not reach. This behavior makes puffins the first seabird known to use tools. Like many creatures, puffins are smarter than we give them credit for—and that intelligence comes from their Creator.

More Than a Funny Face

Looks can often be misleading. In fact, we are told in Scripture not to “judge by appearances, but judge with right judgment” (John 7:24). Puffins aren’t just funny—each of their features serves an important purpose. Even comical creatures remind us that God has and will continue to provide for his creation. They say, “Don’t judge a book by its cover.” Perhaps in the case of the puffin we could say, “Don’t judge a bird by its colors.”

Heather Brinson Bruce earned dual degrees in English and chemistry from Clemson University. She writes for Answers magazine as a freelance author.
Next Article Bleeding Rainbow 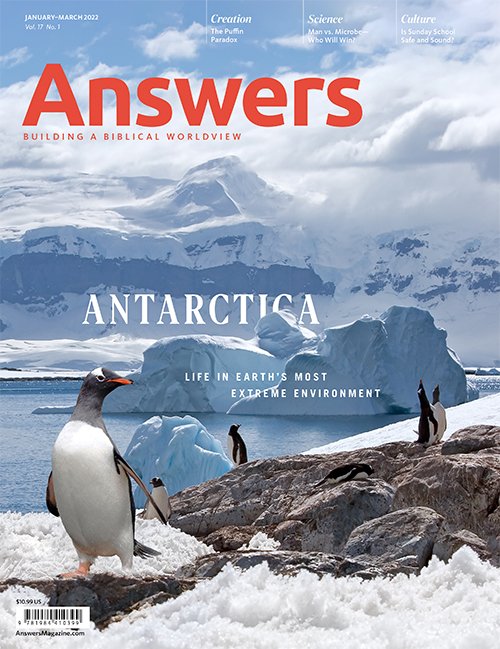 God created the world to be inhabited, right down to the frozen continent at the bottom of the globe.