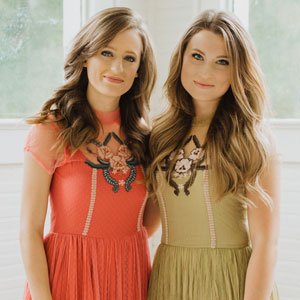 Known for their unique blend of classical and modern musical styles, the Foto Sisters are classically trained siblings passionate about bringing the gospel to others through song. The Foto Sisters have been performing together for over eighteen years and continue to make appearances in different venues across the United States, including civic centers, schools, churches, orphanages, charity, sporting events, and community events.

The sisters trained extensively with Louisiana State University faculty and have received coaching from distinguished national and international artists in violin, viola, cello, and vocal performance. Originally a trio, sisters Katelyn and Gaylyn Foto are approaching their new season as a duo.

The Foto Sisters live near Baton Rouge, Louisiana, but are often in Nashville writing and recording their own music as well as playing as studio artists for other groups. Their travel schedule covers the United States, often allowing them to collaborate and share the stage with other vocal and instrumental artists as well as share their music with national ministries such as Charles Stanley’s In-Touch, Focus on the Family, and the American Family Association.

Over the past few years, they have been privileged to perform our nation’s national anthem at the Louisiana Governor’s Prayer Breakfast, NFL games, and college and high school sporting events. The sisters have recorded seven CDs: My Faith Looks Up To Thee, It Took a Miracle, Morning by Morning, Rejoice in Hope, What Lies Beyond, Lullaby, and A Foto Sisters Christmas.

Learn more about the Foto Sisters.