The latest influenza outbreak has people in a panic. What should Christians think?

The latest influenza outbreak has people in a panic. What should Christians think?

See also maps of the outbreak.

Stories of “swine flu” have dominated news outlets this week, hearkening back to outbreaks of SARS and bird flu in years past. Are we in for a pandemic?

(Last updated September 21, 12:30 p.m. EDT—see below) The 2009 outbreak of swine flu—technically swine influenza A (H1N1)—began with a single known case in the state of Veracruz, Mexico, on April 2. In the weeks since, swine flu has spread to several other countries and is suspected of killing more than 150 in Mexico and hospitalizing 1 in the United States.1 In Mexico, authorities have closed all schools while individuals across the country have donned surgical masks; more than 2,000 possible cases have been reported at Mexican hospitals.2 Police even kept people away from a sold-out soccer game in a bid to reduce the spread of infection.3

In the United States, Dr. Richard Besser, acting head of the Centers for Disease Control and Prevention, said that Americans should be prepared for the problem to become more severe, and that it could involve “possibly deaths.” U.S. officials declared a public health emergency after swine flu infected at least 40 individuals, with a concentration of 28 cases in New York City.4 Cases have also been reported in Canada, Spain, New Zealand, Scotland, France, Italy, and Israel.5

So what are we to think? What is swine flu, how dangerous is it, and is there cause for real concern—or is this just media hype?

Overview: What Is Swine Flu? 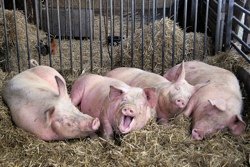 Although swine flu does live in pigs, the variant of H1N1 responsible for the current outbreak has bird, pig, and human components.24 (Credit: Guido Gerding via Wikimedia Commons)

Swine flu is a Type A influenza virus, meaning it can infect not only people, but also a variety of animals.25 The symptoms of swine flu are those of other types of influenza, and include fever, body ache, extreme fatigue, sore throat, dry cough, and lack of appetite. Some also report having a runny nose, nausea, vomiting, and diarrhea.26 Symptoms show up within a few days after the initial infection. Individuals may be contagious both before and after they show symptoms, and some infected individuals may never show symptoms.27

Human infection is usually a result of a human having direct contact with an infected pig. The human may then transfer the infection to another person—or even back to a pig.28

One reason for alarm over swine flu is the speed of international travel, which can transmit the flu (through infected humans) literally around the world in a day.29

Swine flu was first isolated in pigs in 1930. In 1976, a swine flu outbreak in the U.S. led to vaccinations of some 40 million people before the vaccinations were halted amid controversy.30

In 1998, an outbreak of swine flu in the U.S. state of Wisconsin led to multiple human infections. MSNBC reports that “[a]bout one case of swine flu in humans is reported to the CDC every one to two years, but from December 2005 through February 2009, 12 cases were reported to the agency. According to WebMD.com, 11 of those people had direct or indirect contact with infected pigs.”31 Additionally, scientists have been urging more swine flu vigilance for the past several years.32

Since swine flu is a type of influenza, the best preventative measures are no surprise: frequent hand-washing (with soap- or alcohol-based sanitizers); avoiding contact with sick people; and possibly wearing a face mask. Despite some countries’ immediate restrictions on pork imports, swine flu cannot be contracted through eating pork products as long as they are properly cooked.33

A key difference that has become apparent between swine flu and more common types of influenza is that swine flu has killed several young, otherwise healthy individuals. (Most types of flu are more dangerous for young children and the elderly.)34 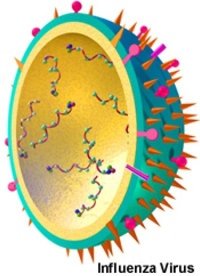 An illustration of the influenza virus. (Credit: NIAID)

The U.S. Centers for Disease Control reports that, according to laboratory testing, the swine flu virus is susceptible to the prescription antiviral drugs oseltamivir (tamiflu) and zanamivir (relenza), two of the four antiviral drugs in the U.S. licensed for flu treatment. (Swine flu is resistant to the other two drugs.35) The drugs are effective against the new strain when taken early. There is currently no vaccine for H1N1 swine flu.36

A virus is a non-living sub-microscopic infectious entity that essentially “takes over” living cells in order to reproduce. The virus that causes swine flu is similar to viruses that cause human flu and the symptoms are similar. Information compiled by several U.S. government agencies states that on average 30 to 50 percent of commercial U.S. swine are infected with swine flu.37 However, the death rate in infected swine is low.38 Typically, swine flu does not infect humans but occasionally it mutates and then is capable of infecting humans. Contact with pigs is usually necessary to “catch” swine flu but sometimes it mutates further and is transmissible from human to human (this appears to have occurred in the most recent outbreak).

Disease and a loving God

Many people wonder how an all-powerful, loving God could create a world in which there are things like viruses, diseases, epidemics, and death. But the Bible teaches us that God created the world “very good” (Genesis 1:31), and only after Adam and Eve disobeyed God did death enter the world (Genesis 3:19, 22). All of God’s creation still suffers from the effects of sin (Romans 8:20–22). But God sent His Son as a “last Adam” to redeem our souls (1 Corinthians 15:45), and thus those in whom Jesus lives have hope for the day when death will be swallowed up in victory (1 Corinthians 15:54) and when there will be “no more death, neither sorrow, nor crying, neither shall there be any more pain” (Revelation 21:4).

(For a complete answer, read Why Does God’s Creation Include Death and Suffering? and see Get Answers: Death & Suffering. To learn how you can enjoy eternal life through God’s only Son, read the Good News!)

At first, the swine flu outbreak may seem to have little or nothing to do with biblical Christianity in particular. However, any time groups of people are dying from what appears to be nature (i.e., in this case, a virus), we receive questions about how a loving God could allow such tragedy (read the answer in the sidebar, right).

Additionally, news media commonly report that viruses such as influenza types are constantly “evolving” and thus thwarting medical treatments.39 The public perception likely mirrors the thoughts of one commenter on a LiveScience article who wrote, “It should also be said that this flu, although relatively a mild influenza as of now, can possibly evolve into a deadlier strain. . . . An extremely virulent and evolving strain could be devastating.”

Flu viruses in general do “evolve” but not in the molecules-to-man sense. Rather they mutate and these changes allow them to infect multiple hosts (pigs and humans) and/or change their mode of transmission (pig to human changes to human to human). These mutations do not add information (as required for molecules-to-man evolution) but rather alter the current information for host specificity and mode of transmission. For more information on viruses from a creationist perspective see:

Is there Cause for Concern or Fear?

“What You Can Do to Stay Healthy” (CDC Tips)

There are everyday actions people can take to stay healthy.

Our first line of defense against swine flu is simple and easy to do: “Basic cleanliness that your mom taught you,” remarked Ken Ham when he was addressing the AiG staff on this issue. Wash your hands frequently with soap or alcohol-based hand sanitizer; cover your mouth with a tissue when you cough or sneeze, and dispose of the tissue immediately; and avoid touching your eyes, nose, or mouth with unclean hands. If you are sick and your symptoms are mild, stay home from school or work; however, head to the doctor’s or to a hospital if your symptoms get worse or if you have trouble breathing.40 Those ill especially should avoid travel.41 See the full list of CDC guidelines (right) for more.

If defense against the flu is so routine, why all the media coverage and official concern?

No room for fear

“News of a new swine flu in humans seemed to spread faster worldwide than the virus itself in recent days,” quipped LiveScience senior editor Robin Lloyd.45 Despite the media hype and cause for reasonable concern, panic is unjustified for several reasons:

Besides, in every situation, we should remember the words of Christ in Matthew 6:25–27:

Therefore I say to you, do not worry about your life, what you will eat or what you will drink; nor about your body, what you will put on. Is not life more than food and the body more than clothing? Look at the birds of the air, for they neither sow nor reap nor gather into barns; yet your heavenly Father feeds them. Are you not of more value than they? Which of you by worrying can add one cubit to his stature?

While a Christian can show reasonable concern over current events and undertake necessary and proper actions to counteract and prepare for the “worst-case scenario,” there is no room for panic in the Christian heart. Instead, be vigilant (as always!), pay attention to reports from the CDC for updates, and keep the affected in your prayers.

Google Maps showing the H1N1/swine flu outbreak in 2009 (these images may be out of date—click maps to see latest information): 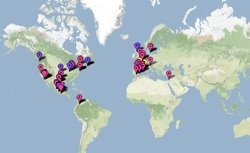 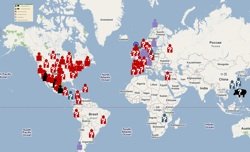 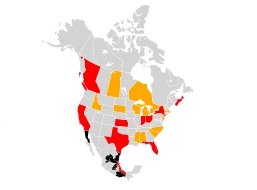 MSNBC also has an online map tracking the outbreak.