Zika Virus, the Olympics, and Genesis

The world is watching. I know I will be. My family and I love watching the Olympics to see the amazing display of athleticism at the highest level. The other day, as we were watching some of the pre-qualifiers, my wife turned and asked me about the Zika virus. Most microbiology and virology textbooks are written to address the more common diseases and focus less on the rest. Because Zika falls into a category that little is known about, we have lots of questions.

What Is Zika Virus?

Zika virus is an infectious disease that is transmitted by mosquitoes.1 Mosquitoes are known to carry a wide variety of diseases, including West Nile Virus, yellow fever, malaria, and Chikungunya (pronunciation: \chik-en-gun-ye). Most of these diseases are not significant health concerns for the majority of Americans, but they are a major concern for those traveling around the world. Each year, there are reports of these other diseases, but the prevalence of Zika is sporadic. 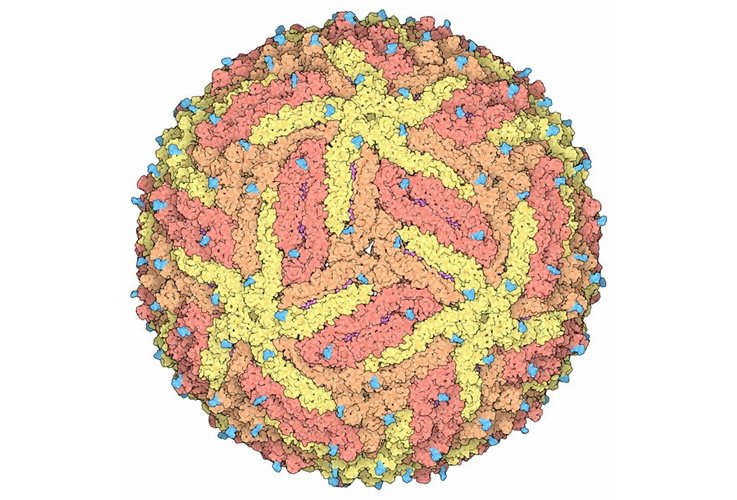 Space-fill drawing of the Zika virus capsid, with the capsid proteins in shades of yellow and orange to show the icosahedral symmetry. The membrane proteins in the under layer (magenta) show through in some places, and the cyan protrusions are attached carbohydrate chains. Image drawn by David Goodsell from the cryoEM structure 5ire, via Wikimedia Commons. 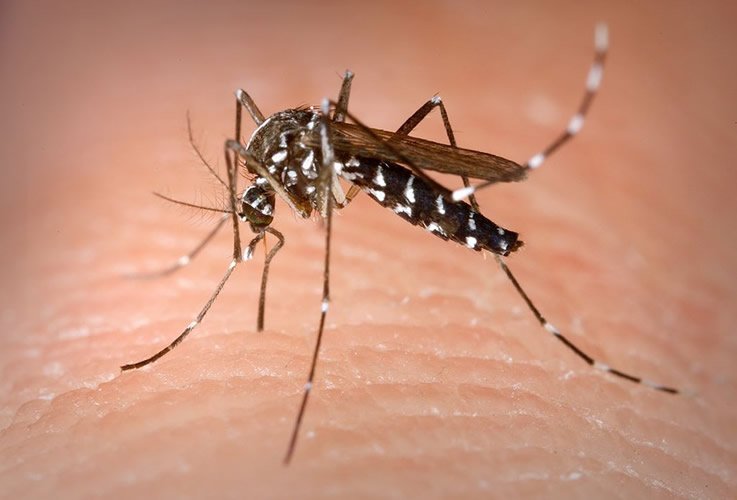 Where Is Zika Virus? 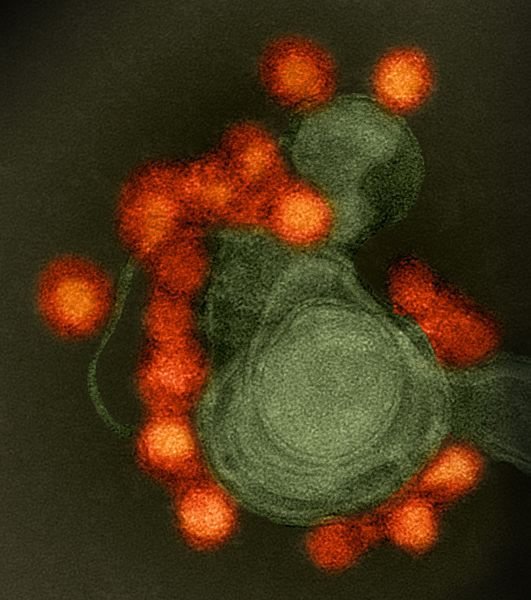 No one knows the origin of the Zika virus. Like other viruses, it probably became pathogenic as a result of the Fall.2 Zika was first identified in 1947 from a Rhesus monkey in the Zika Forest (Uganda).3 The first report of Zika in humans was just five years later.4 Several reports of Zika occurred for the next two decades, but then it seemed to disappear entirely. All fourteen cases remained on the continent of Africa during that time.5 However, the first major outbreak occurred in 2007 (nearly forty years later) in Micronesia.3 It appeared that the virus had begun to spread across Africa and into Asia. Six years later, there was another outbreak with even more cases.6 The 2013 outbreak, however, was in Europe with approximately 10,000 confirmed cases. Since 2013, there have been annual outbreaks of Zika located across all continents except Antarctica.

While the outbreak in 2013 was significant, Zika gained attention when it reached South America in 2014 because it crossed the ocean. Zika outbreaks have continued annually in South America and are currently happening right now. In particular, the outbreak in Brazil is attracting a lot of attention because of the Olympics.7 The CDC has also recently made a major announcement that Zika virus has been confirmed in 15 cases in northern Miami.8 The original reports were significant enough, but no one was sure whether sustained transmission would occur. We are now experiencing the spread of Zika in northern Miami, and concerns are growing whether it will spread farther north or remain contained.

What Does the Zika Virus Do? 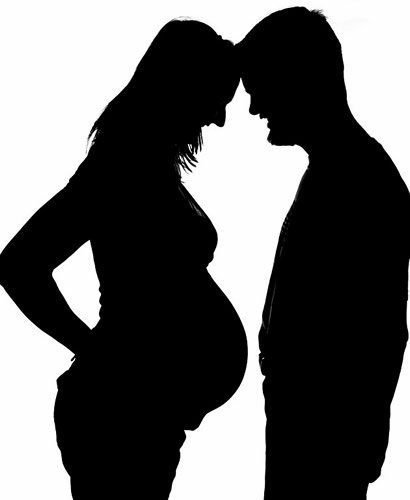 Image by Babypedia, via Wikimedia Commons.

The current recommendations by the Center for Disease Control and the World Health Organization are directed toward pregnant women.9 Technically, there is some debate among experts worldwide on whether Zika actually affects the unborn. The primary reason for this is that there has not been any scientific study to test Zika on pregnant women. But the facts surrounding pregnant women infected with Zika are astounding.

Most people don’t need to worry about Zika virus infections because it mostly causes mild fever, conjunctivitis, skin rash, headache, and joint pain. In particular cases of pregnant women infected with Zika, the symptoms include microcephaly and miscarriage.10 There were no fatalities until 2014 when two newborns passed away in less than 24 hours.11 The strong irony with our society’s concern for pregnant women with Zika is that this same society also devalues the life of the unborn. An evolutionary worldview employing moral relativism shouldn’t have any problem with letting the unfit die. But from a biblical worldview, we value life because it bears the image of God: God hates inhumanity.12

How Long Does Zika Virus Stay in the System?

With the Zika virus being transmitted by a mosquito bite, it is often very difficult to know when you were bitten and therefore know the precise timing of when you contracted this disease. In general, symptoms develop within two to seven days and can last up to one week without developing severe complications (which are rare).13 The big mystery with Zika is that only one in four people bitten by a mosquito carrying Zika ever report having any symptoms.

What Are the Symptoms of Zika?

There is no way to tell whether a particular mosquito bite is transmitting Zika. There are no known special characteristics on the skin besides a noticeable rash after two to seven days (normal mosquito bites disappear within a day). Without having any real way to track whether the mosquito that bit you is carrying some disease, the primary efforts aimed at controlling the spread of Zika are focused on controlling the mosquitoes—no easy task. The reason we focus our efforts on the mosquito is that there are no known treatments for Zika, and there is no current vaccine available. Ultimately, people should contact their primary care physician if they’ve been in an area known to carry Zika and are experiencing any symptoms.

Why Not Just Kill All the Mosquitoes?

Mosquitoes are classified as ectoparasites, which is a fancy way of saying what you probably already know about them: mosquitoes suck your blood. The reason mosquitoes consume blood is to complete their life cycle. Much research has gone into better understanding mosquito populations in an effort to minimize the spread of diseases like Zika. 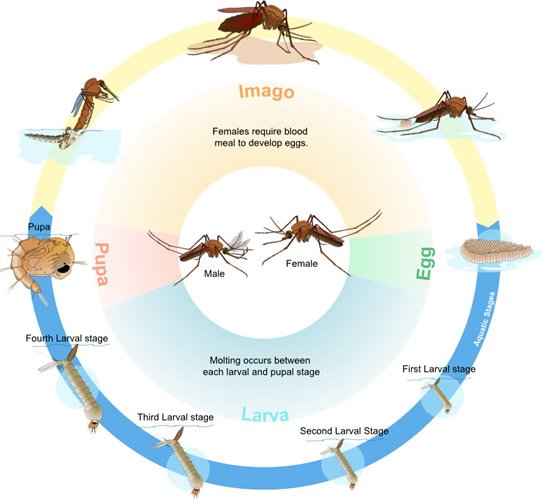 Image by LadyofHats, via Wikimedia Commons.

In general, anyone concerned with mosquito-borne disease should remain indoors during times when mosquito activity is highest (during the evenings), wear protective clothing, and find some kind of insect repellent. Current efforts in Miami also include spraying for mosquitoes in a concerted effort by the city. Hanging screens or nets to prevent small insects from gaining access into buildings is also helpful. Mosquitoes are known to collect over stagnant water, so frequent removal of stagnant water into the sewer system will help minimize the breeding grounds. There are even some amazing microbes used to control mosquitoes: Bacillus thuringiensis secretes a toxin that kills mosquito larvae.14 But should we react so harshly even to something that is such a pest? 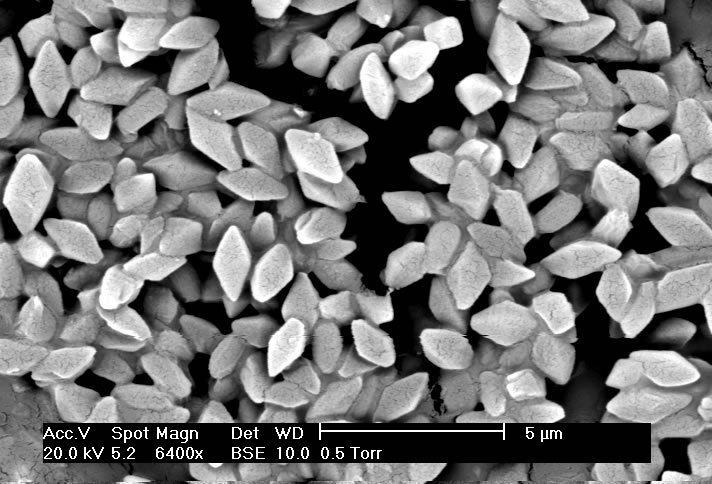 Mosquitoes Were Very Good Before the Fall

One of my favorite things is to compile a list of things that seem difficult to find any good in them. God made everything and declared it “very good” before sin entered (Genesis 1:31). After sin, all of Adam’s dominion was affected by the curse, and everything groans and travails until today (Romans 8:22). I’m not on a campaign for save-the-mosquitoes, but I am on a campaign to find a redeeming quality of what they did because they are part of God’s marvelous creation. 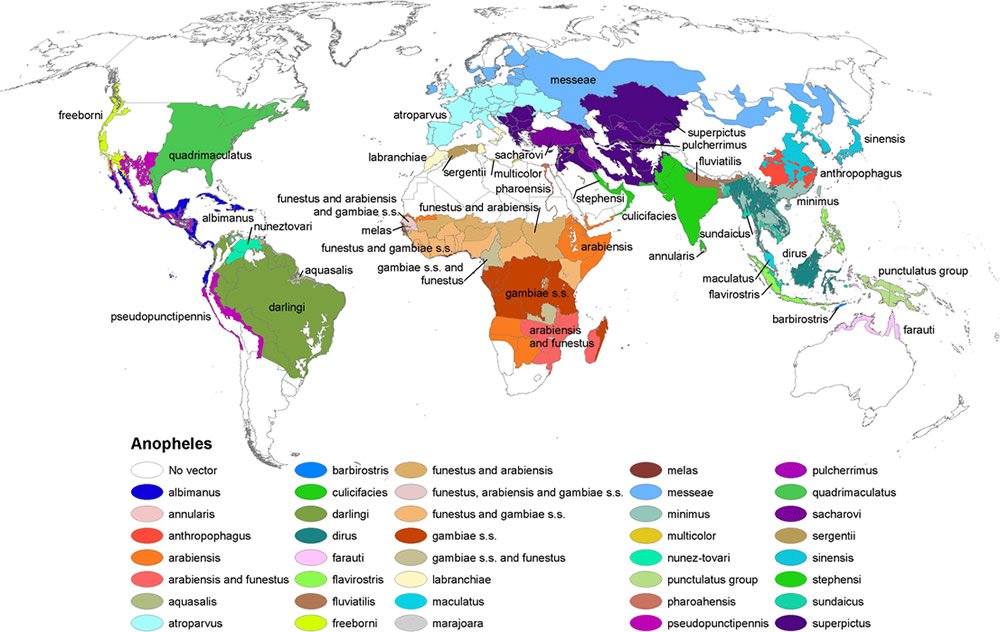 Range Map of the Anopheles Mosquito. Image by US CDC/Photohound, via Wikimedia Commons.

In my research, the one misconception I’ve found about mosquitoes is that they’re only found in tropical areas. Mosquitoes are actually found almost all over the globe and can be found even in tundra regions. While they still seek a blood meal in a fallen world, mosquitoes are responsible for pollinating flowering plants in areas where there are no bees. You can see the exquisite design of the mosquito and how its nose is perfectly designed to reach the pollen and then transfer it. Dr. Alan Gillen of Liberty University and Frank Sherwin of ICR will detail the design of mosquitoes in an upcoming article in Answers in Depth, where they also previously touched on the harmless pre-Fall function of mosquitoes in the 2013 article “The Genesis of Malaria.” Without mosquitoes, many flowering plants and food supplies in colder climates would suffer, devastating that ecosystem. Without a doubt, mosquitoes were part of the very good world that God created. Though we don’t enjoy getting bit by a mosquito or contracting a disease, mosquitoes should serve to remind us that we live in a fallen world, cursed by sin, which will eventually be redeemed.

How to Fight Zika

Prayer. We must pray for those in medical institutions and scientists working on understanding how this virus works. Pray for the front-line officials monitoring the spread of the disease that they would use wisdom in figuring out how to control (not eliminate) all mosquitoes. We have many tools available to combat disease; however, while many of them include good medicine, we must not forget the power of prayer. If we neglect prayer and reliance on God during these trying times, then what kind of witness is that to a lost and dying world without hope? We must also remember to pray for those that are infected with Zika, whether they know or not, that they would see God’s hand in this fallen world. In particular, we should pray for those without Christ that He will save them; we should also pray for opportunities to spread the gospel as a result. Too many times, we wait until we get sick before we depend on God to answer our prayers. Maybe this will be a wake-up call for everyone to realize that our dependence should be on Him for everything. There is hope for those that have trusted Christ and rely on Him during all of life’s trials . . . including Zika virus.