Sky Survey discovers a faraway quasar cluster that is too big to exist within the big bang model’s assumptions.

The twinkles in our night sky are far more complex than we can discern with the naked eye. To get a more 3-dimensional understanding of the view from earth, the Sloan Digital Sky Survey, started several years ago, gathers and integrates massive amounts of telescopic data. (For Star Trek enthusiasts, picture the “Astrometrics Lab” on Voyager to get some idea of what this survey entails.) The project has cataloged the relative locations of thousands of galaxies and quasars. Now the survey has discovered the biggest known cluster of quasars ever found. The problem is, the cluster—known as the Huge-Large Quasar Group (Huge-LQG)—is too big to be accommodated within the assumptions underlying the big bang theory. 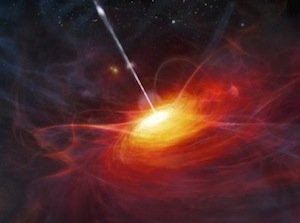 Quasars like the one depicted here are faraway compact high-energy structures at the far reaches of observable space. They are visible from earth because they are so bright. Quasars and galaxies are both thought to contain black holes, but those within most galaxies are thought to have already pulled in nearly all the matter accessible to them. Each quasar, on the other hand, is thought to be so bright because the black hole it contains is actively pulling in matter. The bright accretion disk that makes it visible is likely produced by the conversion of the gravitational energy from the matter accelerating toward the black hole into radiant energy. Because quasars appear to be surrounded by distant galaxies, and because they are only found at the far reaches of the universe, some scientists think that we are seeing quasars that long ago gave birth to galaxies. Image credit: M.Kornmesser, ESO from news.nationalgeographic.com

“This discovery was very much a surprise, since it does break the cosmological record as the largest structure in the known universe,” said study leader Roger Clowes of England’s University of Central Lancashire. Currently, the conventionally accepted cosmological model demands that nothing larger than 1.2 billion light years can exist. This far distant cluster of quasars is nearly 4 billion light years in diameter.

“The usual models of the Universe in cosmology, varying only according to the parameter settings, are built on the assumption of the cosmological principle – that is, on the assumption of homogeneity after imagined smoothing on some suitably large scale,” Clowes and his colleagues write in the Monthly Notices of the Royal Astronomical Society.1 Of course, it is obvious from just looking around that, on a small scale, the universe does not have a homogeneous (smooth) distribution of all matter and energy. However, the majority of cosmologists today assume that, on a grand enough scale, the universe is pretty much homogeneous. Think of this “smoothing” concept like a great averaging of sizes. But something as big as this Large Galaxy Cluster cannot be simply averaged in to a smooth homogeneous universe. And if the universe is not, on average, smooth, then the cosmological principle (the idea that the universe must be homogeneous, which underlies other cosmological ideas, like the big bang) is not true. 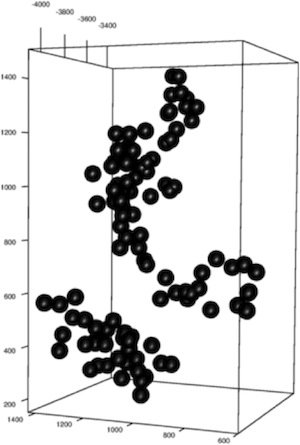 This model shows the S-shaped cluster known as Huge-LQG. Red shift-based calculations of distance indicate all 73 quasars are in approximately the same region of space and therefore form an actual cluster. Another cluster of quasars, not quite as large, is nearby and is indicated in the lower part of the box. The two clusters do not appear to overlap. The larger cluster stretches across almost 4 billion light years, making it the largest known structure in the universe and larger than current cosmological models indicate is possible. Image credit: mnras.oxfordjournals.org

“In summary, the Huge-LQG presents an interesting potential challenge to the assumption of homogeneity in the cosmological principle,” the authors write.2 “It could mean that our mathematical description of the universe has been oversimplified—and that would represent a serious difficulty and a serious increase in complexity,” admits Clowes.

The big bang idea of the universe’s origins is based on this cosmological principle of assumed homogeneity. Such homogeneity is assumed without proof because it makes the mathematics of the big bang model work out.

Besides forcing a revision in some aspects of the big bang model and the cosmological principle on which it is partly based, evolutionary cosmologists hope the discovery of this huge quasar cluster will help them understand how galaxies formed.

Besides forcing a revision in some aspects of the big bang model and the cosmological principle on which it is partly based, evolutionary cosmologists hope the discovery of this huge quasar cluster will help them understand how galaxies formed. Quasars are primarily found in the most distant parts of the universe. Evolutionary cosmologists believe distant light takes billions of years to reach earth, so they interpret a telescopic look at a quasar as a peek backwards in time almost as far back as the big bang, to a time when galaxies were forming. Quasars are thought by many to be involved in the evolution of galaxies.

This erosion of a fundamental principle on which the big bang is based is not the first scientific challenge to the conventional cosmological model. Furthermore, alternative explanations for light-travel time3 eliminate the idea that astronomers are peering back in time and instead demonstrate they are merely looking far away. Based on these explanations, we can understand that the biblical framework of a young universe just thousands and not billions of years old is a scientifically correct view of history.

Biblical chronology indicates God created everything in earth and space about 6,000 years ago over the course of six days. And He made the earth three days before He made the sun, moon, and other stars. Thus, whatever the nature of quasars, they are not early products of the big bang and we are not peeking back through time and watching them give birth to galaxies. And it is no real shock to discover that this cluster of quasars is more massive than expected within the big bang’s foundational assumptions, since the big bang model is itself derived from worldview-based assumptions that are contrary to biblical history, our Creator’s eyewitness account of our origins.