Creation Museum Does Not Support the Curse of Ham

The Creation Museum does not promote the erroneous “curse of Ham.”

Earlier this week the late Martin Luther King, Jr. was honored on a day set aside to acknowledge his efforts to secure civil rights for all, especially African-Americans. Historically, some people have promoted racist ideas on the pseudo-biblical basis of the “curse of Ham.” I write “pseudo-biblical” because there is really no such thing in the Bible.

Unfortunately, some people cast aspersions on those (like Answers in Genesis) who stand for biblical truth by falsely claiming that we promote such a racist philosophy. Worse than that, they falsely claim the Bible promotes it. The Bible does not support or condone racism.

The Bible doesn’t refer to people groups as races. Neither does it disparage any people on the basis of their skin shade.

Incidentally, we prefer to avoid the term “races” in favor of “people groups.” The Bible doesn’t refer to people groups as races. Neither does it disparage any people on the basis of their skin shade. In fact, God punished Moses’ siblings Miriam and Aaron for criticizing Moses’ marriage to an Ethiopian, presumably dark-skinned, woman (Numbers 12).

The entire human population of today is descended from Noah’s family. Many people groups can be traced through geography, history, and language. After Noah’s descendants were dispersed through confusion of their languages from the Tower of Babel, people spread through the world and acquired a number of additional distinctions as a result of their isolation through a variety of genetically related mechanisms. Children taught this correct biblical history should understand that all people are related. We are, as the Bible says, “of one blood” (Acts 17:26). See AiG’s Chart of people groups (pdf) to learn more. Biblical truth should combat racism, not promote it.

The Bible does not teach that Noah cursed his son Ham, that this alleged curse had anything to do with skin color, or that a biblical curse justifies oppression of darker skinned people. In the years after the global Flood, the Bible records that Noah got drunk on wine and passed out naked in his tent. His son Ham mocked Noah to his brothers, and soon afterward Noah pronounced a curse upon Ham’s youngest son, Canaan. Noah actually prophesied about the future of each of his sons’ descendants as part of this pronouncement. Biblically, a “curse” often refers not to a vengeful condemnation but to a prophecy of a bad outcome. Noah never cursed his son Ham, but he did prophecy in Genesis 9:24–27 that the descendants of Ham’s son—Noah’s grandson, Canaan—would somehow serve those of his brothers.

We are not told why Noah specifically pronounced this future for Canaan and his descendants. There has been much speculation on that point. See The Curse of Canaan to learn more about this and about the historical fulfillment of the “curse of Canaan.”1 In any case, the future role of Canaan’s descendants in serving the descendants of his uncles did not mean that they (much less the people of Africa!) were divinely doomed to slavery. 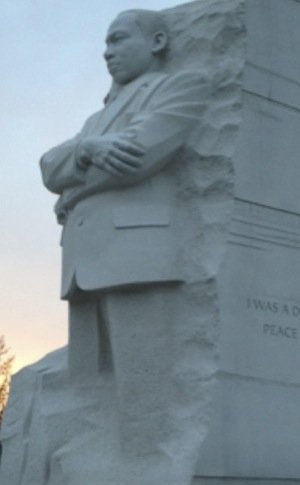 This monument in Washington, DC, honors Dr. Martin Luther King, Jr. for his efforts to secure justice for oppressed people everywhere. Dr. King’s efforts called attention to racial injustice ingrained in American society. Racism comes from the evil ideas of sinful people, not from the Bible. And the Bible contains no such thing as the “curse of Ham.” Photo credit: Elizabeth Mitchell 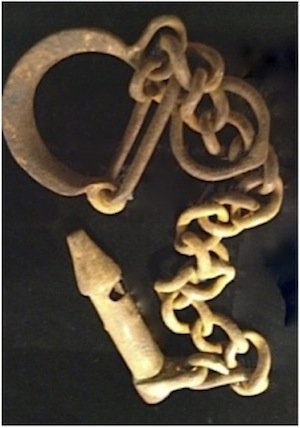 These 19th century slave shackles, on display in the Creation Museum, are a sad reminder of how some people have distorted Scripture to support slavery, oppression, and racial discrimination. The signage here explains, “In the mid nineteenth century various distortions of Bible passages were used to justify slavery. Some people denied the biblical truth that all humans are descended from Adam and Eve, claiming that ‘blacks’ were not human. Actually, everyone has the same skin color—there are not ‘black’ or ‘white’ people, for all people are basically a shade of brown. Others distorted what the Bible teaches to argue falsely that dark skin color was a curse upon Noah’s son Ham. Actually, the curse was pronounced upon Ham’s son Canaan and had nothing whatsoever to do with skin shade.” Photo: by Elizabeth Mitchell at Creation Museum, Petersburg, Kentucky. 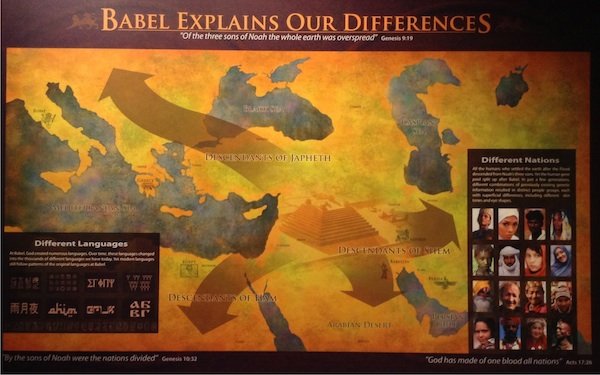 This map is part of the Creation Museum display to show how the Bible explains the differences between people groups, showing here the dispersal pattern of the descendants of Noah’s sons. The Bible’s history records the fact that Adam and Eve are the ancestors of people of all skin shades. This and displays like it do not promote racism but rather combat it. See AiG’s Chart of people groups (pdf) for more information. Photo: by Elizabeth Mitchell at Creation Museum, Petersburg, Kentucky.

At the Creation Museum, we have an entire room devoted to a biblical explanation for the origin of people groups. In the same room, we have displays chronicling and condemning racism. Furthermore, a museum display explicitly states that it is wrong to argue “that dark skin color was a curse upon Noah’s son Ham.” Yet the museum’s detractors declare otherwise. While we still hear occasionally of individuals or churches that misuse the Bible to perpetuate racist notions, we hope this display helps eliminate that.

People who have misused the Bible in an effort to promote slavery and racial oppression have been tragically wrong.

All people are descended from Adam and Eve. All people groups and variations developed over the past 6,000 years are equal in the sight of God (Romans 10:12). People who have misused the Bible in an effort to promote slavery and racial oppression have been tragically wrong. Biblically, there is absolutely no justification for racism or forced conditions of servitude.

Evolutionary thinking, on the other hand, provides support for racism. Darwin, in his world-changing tomes The Origin of Species by Means of Natural Selection or the Preservation of Favored Races in the Struggle for Life and The Descent of Man, proclaimed his belief that some people groups are more highly evolved than others. In The Descent of Man, Darwin repeatedly called people with darker skin “degraded” and hundreds of times described them as “savages.” In fact, Darwin actually predicted in The Descent of Man that civilized people would someday exterminate such savages. Darwin’s own words provided “scientific” justification for the next century of “racially” based atrocities. Though evolution is not the cause of racism, the late evolutionist Stephen J. Gould noted, “Biological arguments for racism may have been common before 1859, but they increased by orders of magnitude following the acceptance of evolutionary theory.”2

Evolution, despite claims to the contrary,3 cannot rescue the world from the scourge of racism. Rightly accepting what the Bible actually says about the origin of people groups and about God’s love for all is the basis on which to build a better tomorrow.

AiG President Ken Ham has a written a blog item this weekend about the non-existent “curse of Ham.” You can also learn more about the ways evolutionists like Darwin, Ernst Haeckel, and even James Watson (of DNA fame) have promoted extreme racial prejudice. See the top link below.

Previous Article Wrinkled Fingers Get a Grip—but Not on Evolution Next Article Could Cloning Technology Resurrect Humanity’s Past?