on December 29, 2014
Featured in Thinking Outside the Box
Share:
Email Using:
Gmail Yahoo! Outlook Other 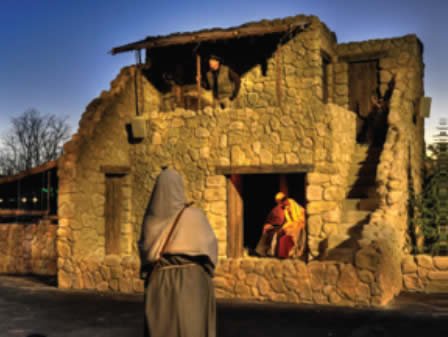 The Nativity (depicted here in our Christmas Town outreach at the Creation Museum this month) connects to both Adam and Noah.

The Lord gave Noah some rather unique instructions. “Make yourself an ark of gopherwood; make rooms in the ark, and cover it inside and outside with pitch . . .” (Genesis 7:14). Specific dimensions and more were also included in God’s command.

Noah’s task would take many years to complete, and in reverent fear, Noah faithfully built the Ark “for the saving of his household” (Hebrews 11:7, ESV). Genesis 6:22 states plainly, “Thus Noah did; according to all that God commanded him, so he did.”

Thanks to Noah’s obedience, members of every kind of land animal were protected from the global Flood. More important, Noah and his family were on the Ark, preserving mankind so that the Savior would eventually be born as a descendant of Adam through Noah.

While we celebrate the birth of Jesus at this time of year, we must remember why He came. The Son of God “humbled Himself and became obedient to the point of death, even the death of the cross” (Philippians 2:8). Jesus Christ is the ultimate example of obedience. By faithfully carrying out the Father’s plan, Jesus paid the price for our sins at the Cross so that we can be forgiven by our righteous Creator.

Noah’s obedience led to physical salvation from the global Flood. Christ’s obedience made it possible for us to be saved from the coming judgment and the eternal consequences of our rebellion.

The Ark Encounter will highlight the truth of God’s Word, particularly when it speaks of Noah’s obedience in building the Ark. Our desire is to use these truths to tell people about the perfectly obedient Savior, Jesus Christ.

The Nativity (depicted here in our Christmas Town outreach at the Creation Museum this month) connects to both Adam and Noah.

Previous Article Lumping or Splitting? Next Article A Pre-Flood Empire?