on January 27, 2015
Featured in Thinking Outside the Box
Share:
Email Using:
Gmail Yahoo! Outlook Other 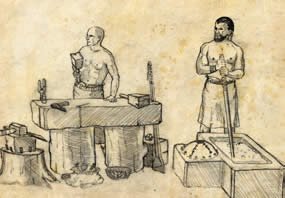 Genesis 4:22 tells us that pre-Flood men knew how to craft and work with bronze and iron.

Other than stressing humanity’s widespread evil, the Bible tells us very little about the culture of the world before Noah’s Flood. We are given a tiny glimpse of it when Genesis mentions the murderer and polygamist Lamech and his two wives, Adah and Zillah:

These verses show us that ancient man possessed the technological capabilities to make musical instruments and work with metals. But something else stands out in these verses. In a world that could have had millions of people by this time, why would the leaders of each of these industries come from the same family?

One possible solution is that these were the people living in Noah’s area who led these industries. But this idea seems to fall short since these individuals were said to be over “all those who play” and over “every craftsman.” Maybe this family possessed superior intellect or ingenuity, but this also seems unlikely given that man has been very intelligent from the beginning.

Perhaps Lamech ruled over much of the pre-Flood world, and he gave his sons control over these various industries. This idea would fit with his proud and boastful attitude (Genesis 4:23–24).

Without clear instruction from Scripture, we cannot know with certainty why one family was at the forefront of these industries. Yet we can be sure that their world was destroyed by the global Flood, and only those on Noah’s Ark were spared.

Previous Article Models of Obedience Next Article How Did the People and Animals Leave the Ark?