Learn More
Thinking Outside the Box

on February 6, 2014
Featured in Thinking Outside the Box
Share:
Email Using:
Gmail Yahoo! Outlook Other

Did Noah keep a day-by-day log as many ship captains do?

Did Noah pen an account of his voyage? Did he keep a day-by-day log as many ship captains do? Is there somewhere a report of all that happened to him and his family during their year-long ordeal? 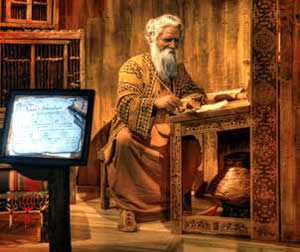 This animatronic Noah inside a Creation Museum exhibit is depicted penning his thoughts about the Ark’s incredible journey.

Using a bit of imagination, we can think of ourselves standing beside Noah inside the Ark as the mighty ship first pitched off the foundation timbers that likely supported it on land. What fears might have filled Noah’s heart when torrential rains thundered down upon the Ark and then when the great vessel began lurching upon a violent sea? Did Noah get seasick?

If he had written a journal, he could have told us.

He might have described how thick clouds obscured the sun so that it gave little heat to the earth. Maybe the weather grew cold after a few days. You might imagine Noah and Mrs. Noah with blankets wrapped about their shoulders as they tended to frightened animals.

Without having to use our imagination and relying instead on God’s Word, we read the account in Genesis 7 of the breaking apart of the fountains of the deep. This breaking up would have almost certainly tossed the Ark about. But because of its stable design due to its seaworthy proportions, the Ark would have ridden out the angry waters with confidence. After all, it was the Creator—the designer and builder of the world and all its magnificent complexities—who specified to Noah how the Ark was to be built.

It’s exciting to think there might be a Noah’s Journal lost in some dusty library somewhere! For the moment, we have God’s trustworthy Word that gives us the big picture of what occurred 4,350 years ago!

Previous Article Legends of the Flood Next Article Preserved Through the Ages?