Star light, star so bright—is this hot spot in the sky churning out stars at record-breaking speed?

A galaxy far, far away—prosaically named SDSSJ1506+54—has been identified by scientists as a particularly “hot” spot in space. They interpret their measurements of the galaxy’s energy output as evidence that it is a highly efficient stellar nursery. Six billion light years away, the bright “green” galaxy—so-described for what researchers interpret as total conversion of its fuel to stars—emits an attention-getting amount of infrared radiation. 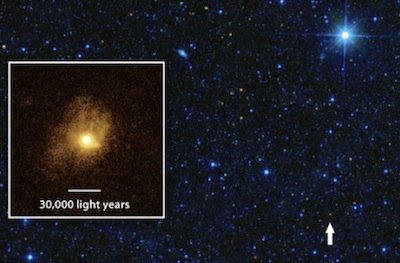 The bright red spot in this image from NASA’s WISE observations is not a star but a galaxy. Designated SDSSJ1506+54, this galaxy emits a great deal of infrared radiation. Some researchers think it is a highly efficient stellar nursery. Image: NASA/JPL-Caltech/STScI/IRAM through www.jpl.nasa.gov4

Data collected by NASA’s Wide-field Infrared Survey Explorer (WISE), NASA’s Hubble Space Telescope, and the IRAM Plateau de Bure Interferometer located in the French Alps was compared in order to characterize SDSSJ1506+54. “Because WISE scanned the entire sky, it detected rare galaxies like this one that stand out from the rest,” explains WISE principal investigator Ned Wright. McGill University’s Jim Geach, lead author of the study in Astrophysical Journal Letters reporting the analysis, says, “This galaxy is remarkably efficient. It’s converting its gas supply into new stars at the maximum rate thought possible. We are seeing a rare phase of evolution that is the most extreme—and most efficient—yet observed.”

Although astronomers have never actually observed the birth of a single star, many believe that collapsing clouds of gas form stars.

Although astronomers have never actually observed the birth of a single star, many believe that collapsing clouds of gas form stars. The thought is that most potential star-forming gas ordinarily remains dormant while a fraction of interstellar gas collapses and produces enough gravitational compression of atoms to start the process of nuclear fusion, producing a protostar. Astronomers who believe this is the way stars form think that the maximum possible rate of star formation is limited by interference from the outward wind-like movement of radiation and gas from other stars.

The unusual thing about galaxy SDSSJ1506+54 is that such a large amount of gas appears to be moving away from it. Astrophysicist and coauthor Ryan Hickox says, “We see some gas outflowing from this galaxy at millions of miles per hour, and this gas may have been blown away by the powerful radiation from the newly formed stars.” Spectrographic analysis of the light emitted from this galaxy suggests the presence of hydrogen gas, which scientists believe to be the fuel from which stars are formed. Geach says, “While this galaxy is forming stars at a rate hundreds of times faster than our Milky Way galaxy, the sharp vision of Hubble revealed that the majority of the galaxy’s starlight is being emitted by a region with a diameter just a few percent that of the Milky Way”—only 30,000 light-years across.1

The researchers believe the galaxy is operating its stellar nursery at the maximum possible efficiency. They base this on calculations comparing the estimated total mass of hydrogen present in it with the rate of presumed star formation inferred from the WISE infrared energy measurements. They conclude that all the available gaseous fuel is being consumed.2

Answers in Genesis astronomer Dr. Danny Faulkner, commenting on the claims and comparing them to previous assertions about stellar nurseries, explains:

What they have this time that is new is some recent interesting photographs, spectra, and brightness measurements of a galaxy six billion light years away. This is much too far away to see individual stars. They have interpreted their measurements in terms of prodigious star formation.

It’s most unfortunate that the average reader will come away thinking (once again) that astronomers have actually witnessed the births of stars. These sorts of reports are so common now that the vast majority of the public (and many astronomers) just think that we have seen stars born all over the place.

The truth is, we’ve not witnessed the birth of a single star. The main reason preventing this is the fact that the process is supposed to take a very long time, and we haven’t been watching nearly long enough for a star to appear where there was none before.

So is the galaxy SDSSJ1506+54 far, far away giving birth to new stars? Could stars be forming today? After all, we see supernovae occur in space, so why not star formation too? Although the Bible does not say God is not making more stars, it does say He finished the work of Creation on the sixth day. Genesis 2:1 says, “Thus the heavens and the earth, and all the host of them, were finished.”3 When a star goes supernova, an existing star explodes. But star formation and star explosion are not the same.

Although astronomers who accept the billions-of-years view of the universe’s age believe stars are still forming, they do not actually know how. They believe swirling hydrogen gas cools and condenses until it is dense enough to possess enough gravity to prevent re-expansion. However, gases tend to expand, not contract. Furthermore, if a swirling mass of gas contracted, it would spin faster in order to conserve angular momentum, and that increased angular velocity would oppose continued contraction. Finally, the massive collapse of gas would produce a great increase in the magnetic field, also opposing the shrinkage required to form a star. Thus the ongoing formation of stars seems contrary to the laws of physics, given the conditions that exist in space.

Thus, the astronomers’ worldview colors their interpretations of what they see. Astronomical observations, such as the existence of blue stars, for instance, argue for a young universe, though long-age believers looks for other explanations. Likewise, long-age astronomers assume that a stellar nursery must be the explanation for the data they have collected on SDSSJ1506+54. God created the sun, moon, and stars on the fourth day of Creation week about 6,000 years ago. What we observe in space does declare the glory of God (Psalm 19:1), and we look forward to more discoveries to help us understand the universe God created. Yet we know that the true interpretation of the things we see will never violate the truths of Scripture.