A bright blue galaxy: is it bursting with new stars?

Is a distant galaxy awaking to bring forth new stars? The galaxy at the center of faraway galaxy cluster SPT-CLJ2344-4243, discovered by astronomers using NASA’s Chandra X-ray telescope, is believed by its discoverers to be producing new stars at a phenomenal rate—about two a day. They write, “The central galaxy, which is both the most massive and most luminous galaxy in the cluster, is considerably bluer than the rest of the member galaxies, suggesting significantly younger stellar populations.”1

The discovery is particularly unusual because the central galaxies in clusters are usually redder and therefore believed by evolutionary astronomers to be older and inactive. As MIT’s Michael McDonald, lead author of the study just published in Nature, says, the central galaxy is mature, about 6 billion years old, and is the kind that doesn’t typically “do anything new . . . what we call red and dead. It seems to have come back to life for some reason.” The team of astronomers therefore calls the galaxy cluster “Phoenix,” after the mythical bird that rose from the ashes. 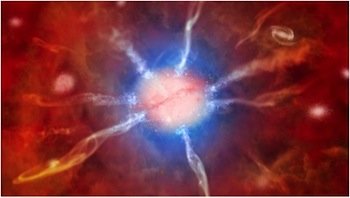 About 5.7 billion light years away, this newly discovered bluish galaxy is at the center of a cluster of galaxies producing the brightest X-ray glow ever seen. But on what basis do its discoverers conclude it is rapidly producing new stars? Image: AP Photo/NASA on www.foxnews.com.

About 5.7 billion light years away, this newly discovered bluish galaxy is at the center of a cluster of galaxies producing the brightest X-ray glow ever seen. But on what basis do its discoverers conclude it is rapidly producing new stars? Image: AP Photo/NASA on www.foxnews.com.

Star formation has actually never been observed. Sometimes astronomers or the media refer to star formation as if they are actually seeing it happen, but they are not. When astronomers see phenomena near stars, they cannot know that the phenomena they are observing have anything to do with star formation. And, as creationist astronomer Dr. Danny Faulkner of the University of South Carolina—Lancaster points out, “At the distance of this galaxy, individual stars are not visible.”

The blue-ness of the distant galaxy is the reason the researchers believe it is rising from its ashes. Bright blue stars are the hottest stars and burn their fuel very rapidly. The maximum possible age for each color star can be estimated, and only red dwarf stars actually have enough fuel to have been burning since the time of the supposed big bang. Both creationist and evolutionary astronomers agree a blue star could not last more than a few million years. Since the latter claim the universe is 13.7 billion years old, they must assume stars have been forming and burning out since it began. They believe stars are still forming today and blue stars are those most recently formed.

However, the conclusion that there is a great deal of star birth happening there is an inference that is laden with evolutionary assumptions.

Dr. Faulkner explains, “When a galaxy such as this appears very blue, it likely is because the galaxy's light is dominated by these bright, hot stars with very short lifetimes. However, the conclusion that there is a great deal of star birth happening there is an inference that is laden with evolutionary assumptions.”

Since astronomers with a biblical worldview believe the universe is only about 6,000 years old, blue stars are easily explained. God formed them on the fourth day of Creation Week as His eyewitness account in Genesis 1:16 says. They’ve only been burning for 6,000 years and so have plenty of fuel remaining.

Could stars be forming today? After all, we see supernovae occur in space, so why not star formation too? Although the Bible does not say God is not making more stars, it does say He finished the work of Creation on the sixth day. Genesis 2:1 says, “Thus the heavens and the earth, and all the host of them, were finished.”2 When a star goes supernova, an existing star explodes. But star formation and star explosion are not the same.

Michigan State astronomer Megan Donahue commented that the findings will help “answer this basic question of how do galaxies form their stars.” Although “long-age” astronomers like Donahue assume stars must be forming, they do not know how. They believe swirling hydrogen gas must cool and condense until it is dense enough to possess enough gravity to prevent re-expansion. However, gases tend to expand, not contract. Secondly, if a swirling mass of gas contracted, it would spin faster in order to conserve angular momentum, and that increased angular velocity would oppose continued contraction. Finally, such collapse of a nebula would greatly magnify its magnetic field, again opposing the shrinkage required to form a star. Thus the ongoing formation of stars seems contrary to the laws of physics, given the conditions that exist in space.

So is this “starburst” an actual birthplace of stars? Neither we nor they can be certain at this point how to interpret this bluer hotter galaxy in the Phoenix, but the idea that it is bursting with new stars is only an interpretation based on the evolutionary demands to explain the existence of blue stars in a billions-of-years old galaxy. In reality, the existence of hot blue stars that could not possibly last for billions of years is evidence for a young universe.