It looks like ice and it acts like ice, but is NASA “red hot” on this claim or ice cold?

BBC News reports on a discovery that NASA’s Phoenix lander uncovered—literally—last week on the red planet.

Echoing news from earlier this month, the Phoenix team believes the lander may have located ice just beneath the planet’s surface, in a trench dug by the craft. The initial photo of the trench showed “[c]hunks of a bright material,” but in a photo four Martian days later, the chunks have vanished. The team’s explanation is that the chunks were ice, which has since vaporized. 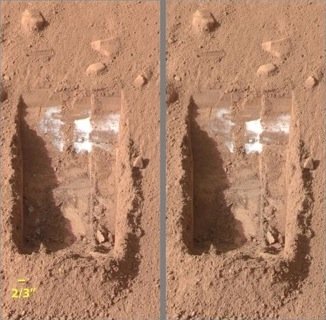 Before and after images of a trench on Mars dug by NASA’s Phoenix lander. The possible ice can be seen in the bottom-left of the trench in the photo on the left, but not in the photo on the right, which was taken four Martian days later. (Click to enlarge.)

The University of Arizona–Tucson’s Peter Smith, who is Phoenix’s principal investigator, explained, “It must be ice. These little clumps completely disappearing over the course of a few days, that is perfect evidence that it’s ice.”

According to Smith, the bright material was initially thought by some to be salt, but since salt can’t evaporate, ice is now the best-fit conclusion.

This find has been corroborated by another trench dug by Phoenix. Digging there stopped when Phoenix ran into a hard layer just under the soil—at the same depth as the hypothesized ice in the other trench. What’s more, the soil features appear similar to those in permafrost areas of Earth, where permafrost in the soil expands and contracts as temperatures cycle.

If Nasa has indeed found (more) ice on Mars, it would not be a major surprise for young-earth creationists.1 After all, we’ve known for a long time that there is plenty of ice on Mars (in the polar ice caps) and that a permafrost layer probably extends considerably beyond the ice caps.2

In fact, this particular icy discovery should cause a cold feeling for evolutionists, who would much prefer to find liquid water but instead have found only this scant evidence of subsurface ice. And of course, the very idea that liquid or frozen water on Mars is a “big thing” comes straight from the evolutionary faith that where there’s water, life will follow. In fact, that’s the entire premise of today’s Martian landers.

The ice on Mars may possibly be, in part, a frozen remnant of a global Mars flood, which has been theorized by some creationists to have occurred near the same time as Noah’s flood—perhaps even as an extension of it. Even today, the Martian ice caps contain enough water to cover the entire Martian surface if the ice were to melt.3

Though we always must remain vigilant to prevent atheistic, evolutionary ideas from intruding into the biblical worldview, we could even consider the hypothesis that before the time of the Flood, Mars was much nearer to Earth’s climate—perhaps even habitable from the start. Was our solar system created to be an extension of exploration for Adam and his descendants, with the Curse and the Flood extending their effects beyond Earth? Were other planets even created with a non-life (according to the Bible) “organosubstrate” that nonetheless would be considered proof of evolution were it discovered?

Since the focus of God’s plan occurs on planet Earth—and since nearly every chapter of the Bible takes place somewhere on planet Earth4—when it comes to astronomy, creationists have a basic framework in which to research and explore but few revealed details. This doesn’t mean we can rewrite what God’s Word clearly teaches—that the entire universe dates back only 6,000 or so years, with most of the universe having been created on Day 4 of Creation Week. But looking to the heavens gives us a great opportunity to research, theorize, and sit in awe of God’s majesty and creation—and, as is the case more and more today, exercise our critical thinking skills.