Ata, a mummified body about 6 inches long, is the featured star in the film Sirius. Sirius, which premiered April 22, is a fundraiser for “free energy research” that promotes belief in UFOs and aliens. The project is the brainchild of former emergency room physician Steven Greer. Greer claims the U.S. government conceals information about extraterrestrial visits to earth in order to suppress the development of free and abundant energy and to keep such alien technology as the exclusive property of the military.

Ata “the Atacama Humanoid” has become, quite literally, the poster-child for Greer’s efforts to prove that aliens have visited earth. Pre-release advertising for the film claimed that DNA analysis to be therein unveiled would show Ata was of “unknown classification.”1 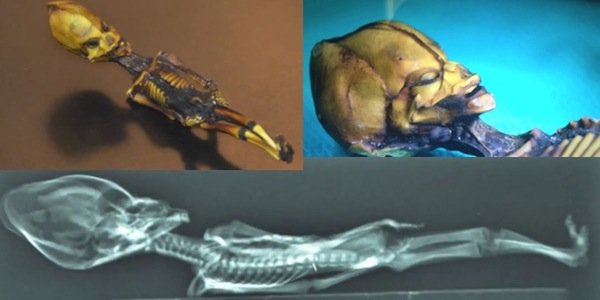 These views show Ata, a mummified 6-inch body found in an abandoned Atacama Desert town. Despite DNA results reportedly confirming this remarkably tiny body belonged to a male human, UFO-promoters consider Ata as evidence that aliens have visited earth. Because along with his size, poorly developed mid-face, and missing ribs, Ata reportedly has a number of mutations, the narrator in the film Sirius even suggests he could be an evolutionary missing link. Images: from the film Sirius.

The tiny body was reportedly found in the abandoned town of La Noria in Chile’s Atacama Desert in 2003 “wrapped in a white cloth tied by a violet ribbon.”2 Nicknamed “Ata,” it traveled through various hands until it reached the Barcelona entrepreneur Ramon Navia-Osorio, head of the Institute for Exobiological Investigation and Study. He had it examined by a forensic specialist from Basque County University, who concluded, “It's a mummified body with all typical characteristics of a fetus. The body displays all the structures and anatomical links normal for the head, trunk and extremities. Taken together, the proportionality of the anatomical structures ... [allows us] to interpret beyond doubt, that this is a mummified human fetus completely normal.”3

As promotional materials for Greer’s upcoming film project took off, so did the viral distribution of the mysterious allegations that Ata the Atacama Humanoid was proof of earth’s alien visitation.

As promotional materials for Greer’s upcoming film project took off, so did the viral distribution of the mysterious allegations that Ata the Atacama Humanoid was proof of earth’s alien visitation. The film promised scientific proof that the body did not belong to a miscarried fetus, which is what an external examination suggests, but to a male that “survived post-birth 6 to 8 years.”4

The film builds drama by showing Greer and his biotechnician flying to Barcelona and dissecting Ata to collect some material from inside the cranium and a bit of rib. It emphasizes the fact that only one person wearing gloves handled Ata, though exactly how that is relevant given that Ata has been handled by countless individuals on at least two continents for at least a decade is a mystery. The possibility of DNA contamination from those who actually handled the specimen, gloves or not, was not ever addressed: in fact, the only “control” specimen was a sample of microbiologist Garry Nolan's blood, and he was not the person who performed the dissection on camera. (The possibility of contamination is ordinarily addressed by scientists examining DNA for peer reviewed research projects. Nolan is a professor of microbiology and immunology at the Stanford University School of Medicine.5 He indicates in the film that he plans to publish his results someday.) The program features intermittent appearances by Nolan, explaining the results of Ata’s DNA analysis, X-rays, and CT scans. Nolan also reads and comments on a few sentences from an analysis by pediatric radiologist Ralph Lachman. Lachman, an expert in skeletal dypslasias and board member of the Little People of America,6 reportedly examined the body and films but declined the opportunity to be interviewed on film. 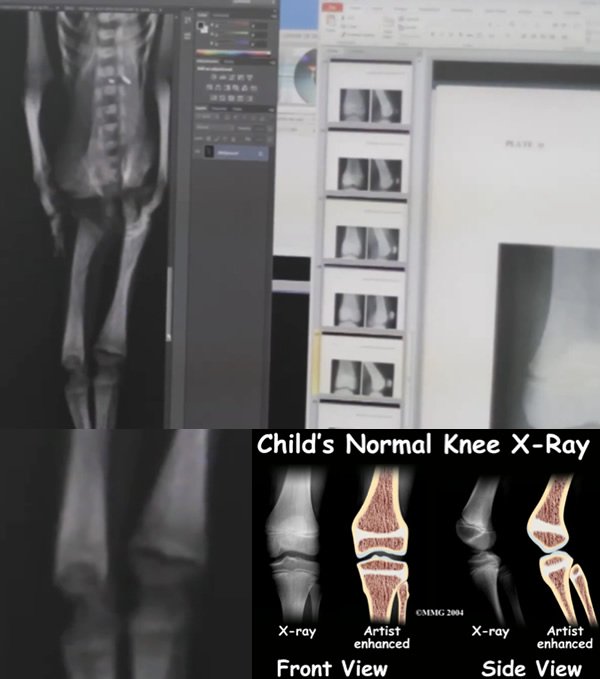 This X-ray of 6-inch tall Ata is interpreted in the film Sirius as proof that Ata was 6–8 years old. In the screen shot from the film (top image), Ata’s knee X-ray (zoomed, bottom left) may be compared with photos from radiology reference works (top and bottom right), showing the normal appearance of a young child’s knee. There is a marked contrast. As shown clearly in the illustration “Child’s Normal Knee X-ray,” a child has a distinctive line separating a calcified epiphysis at the end of the bone from the calcified bone shaft as well as a densely calcified kneecap. These features are missing in fetuses and newborns, and they are missing from Ata. Ata lacks clearly calcified epiphyses, epiphyseal growth plates, and kneecaps. Image: “Child’s Normal Knee X-ray” from “OrthoPediatrics” online patient guide through www.orthopediatrics.com/docs/Guides/osgood_schlatter.html Screen shots from the film Sirius.

Greer, in the film, says that Ata is a “humanoid” that “does not look human.” He reports to his audience that a facial fracture was “how this extraterrestrial being was killed.”7 Nevertheless, Nolan reports “The [DNA] sequence that we got from the mitochondria tells us with extremely high confidence that the mother was an indigenous Indian from the Chilean area. The other thing that immediately fell out of the analysis is that it's male. It probably died in the last century, if I were to make a guess.” Nolan says there is a complete Y chromosome present. Thus, though he may have had many mutational defects, if the DNA examined was truly from Ata, then Ata had a human genome. (Nolan does not specify what sort of mutations might be present but simply indicates that a lot of places in Ata’s DNA don't match up with normal sequences.)

This specimen does not fall under any known (to me) class of disorders or syndromes known. In many respects the proportions of the spine and extremities are normal. The major abnormalities appear to be

Nolan points out that the most shocking discovery was that the epiphyseal growth plates seen near the ends of bones on X-ray suggest “an apparent age of 6-8 years.”9 However, the X-ray shown in the film does not support this claim. Fetuses and newborns have calcified long bone shafts, but their bone ends are cartilaginous. Over time these epiphyses normally calcify, and until growth is nearly completed a clear growth line can be seen between the calcified epiphysis and the bone shaft. In fact, in the film (as shown in the screen shot included here) the computer screen to the right of Ata's X-ray displays a photographic plate from a radiology reference showing what the X-ray of a child's knee looks like. The reference X-ray shows the clearly delineated epiphyseal growth plate, a calcified epiphysis, and a calcified kneecap (something else fetuses and newborns lack). None of these are visible on Ata's X-ray. Thus, the original assessment ascribed to the Basque County University forensic specialist—that Ata is a fetus—is the most reasonable conclusion. (Ata may have had some facial abnormalities as reportedly suggested by Dr. Lachman, or alternatively some distortion and disintegration. The Basque forensic specialist described the fetus as normal in appearance. And the lower pairs of ribs, being largely cartilaginous, may well have been lost to disintegration.)

So what is it that prompted filmmakers to claim Ata belonged to an “unknown classification”? Nolan points out that DNA analysis reveals many mutations but not a constellation of mutations associated with any known syndromes. For instance, though there are mutations associated with certain forms of dwarfism and with rapid-aging syndromes, this DNA sample did not have those particular mutations. That the many mutations present did not fall into a previously identified genetic abnormality, coupled with Dr. Lachman’s statement that the morphological abnormalities did not fit any known skeletal dysplasia, left the door open for speculation.

What sort of speculation? Speculation on the part of Nolan—who despite making it clear that the DNA is that of a human and puzzling about which genetic abnormalities explain the body’s anomalies—then added “I’d like to say other things here but . . .” while waving his hands and declaring that whenever he collates all the data, he’ll post it to the internet for the world to see. And then there is speculation through the subsequent narrator’s Twilight Zone—style voiceover saying:

This search may have uncovered a major finding about life in the universe and its origins. What is this being? Could it be a missing link in evolution? Could it be an entirely new species, or simply a disease we have never seen before? Or could this be an extraterrestrial being from another world?10

People who are determined to prove that aliens have visited earth have for decades been fixated on representations of those aliens as “humanoids” with bulbous misshapen heads.

People who are determined to prove that aliens have visited earth have for decades been fixated on representations of those aliens as “humanoids” with bulbous misshapen heads. We discussed this a few months back when reporting on the ongoing “Starchild” claims. But the simple fact with this discovery, as with “Starchild,” is that—assuming the DNA results are authentic—DNA shows the body was human. Both the X-rays and simple visual examination are consistent with a miscarried human fetus—not an alien, not a missing link, not a new species, and not even a 6–8–year-old real life Tom Thumb. (Note that neither the DNA results nor the X-ray studies nor even Dr. Lachman’s report have been vetted through any sort of peer-review process. We make no claim to either support or dispute their authenticity, but merely point out that the only the material available to the scientific community at large is the material selected for presentation on the $19.99 video fundraiser.)

Many who believe in extraterrestrials do so because of evolutionary presuppositions that life evolved here and elsewhere too. And while the Bible does not say that God didn’t create extraterrestrial life, it does affirm that God created the entire universe (John 1:3), which now all groans under the corruption caused by man’s sin (Romans 8:21-22). God’s Son Jesus Christ came to Earth as a human being, the ““last Adam” (1 Corinthians 15:45–47), to die for all human beings who, like our real common ancestor—the first Adam—are sinners. Thus the theological position of extraterrestrial intelligent life would cast aspersions on God’s character, as such beings would be reaping the guilty whirlwind of man’s sin without access to the grace of Christ.

Like those who suffer from any disease, genetic or otherwise, and all babies that miscarry, Ata was a human victim of sin’s curse on the perfect world God made.