Will the Pentagon Report Prove UFOs Are Real?

Ken Ham: Expect Pentagon report to contain evidence for UFOs (or UAPs), but no evidence for interplanetary, intelligent beings. 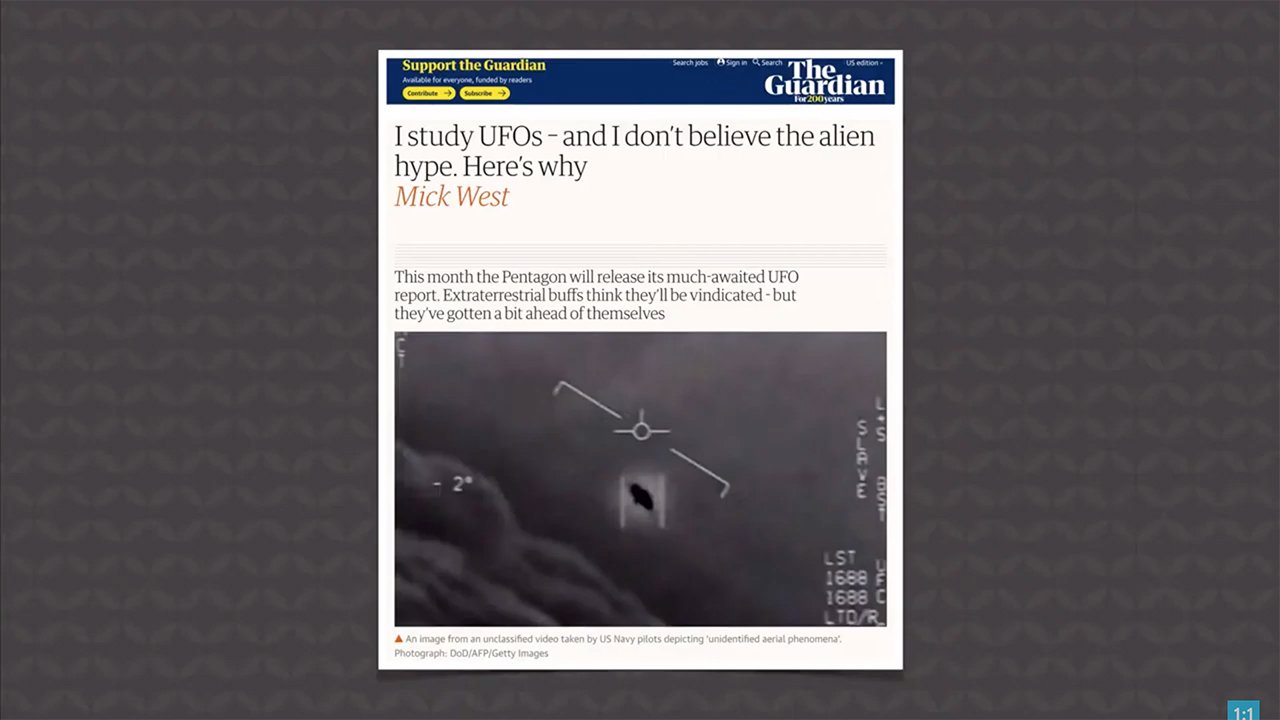 There’s been a lot of interest in UFOs lately as the Pentagon announced this month that they will be releasing previously classified information regarding a variety of UFOs. What will the report reveal? Some speculate it will provide vindication of the UFO-believing community. But others, like this opinion writer who is a UFO video analyst, say “not so fast.” He writes:

The evidence is underwhelming . . . I expect the Pentagon’s forthcoming UAP [unidentified ariel phenomena] report to be more of the same . . . This is not to say there’s nothing for the military to be concerned about. There are real issues regarding unidentified sightings—drones being a major one. A distant drone, even a domestic one, is difficult to identify, and we know foreign adversaries have a strong interest in developing and using novel stealth drones for espionage and probing our defenses. There are other genuine issues, too—like anomalous radar returns and inexplicable eyewitness sightings—but there’s no evidence of aliens. There isn’t even really any good quality evidence of flying objects displaying amazing technology. There are, however, many people who want UFOs to be “real” and who feel like promoting the story will make it real. They present weak evidence as strong evidence. Don’t be fooled.

There’s another reason you shouldn’t be fooled by the hype: when you start with God’s Word, you can confidently say there are no intelligent beings on other planets.

But there’s another reason you shouldn’t be fooled by the hype: when you start with God’s Word, you can confidently say there are no intelligent beings on other planets. You see, God formed earth to be inhabited (Isaiah 45:18)—not Mars, Venus, or some other far-flung planet. Also, when Adam sinned, his sin affected all of creation (Romans 8:22). Jesus came as the last Adam to save those of Adam’s race who will repent and believe. If there were intelligent aliens out there, they would suffer the effects of sin but couldn’t be saved because Christ died for mankind, not for aliens (1 Peter 3:18; Hebrews 9:27–28, 10:10). So, theologically, we know that aliens can’t (and don’t) exist.

The Pentagon report may include some mysteries, but it won’t contain evidence for aliens. Secularists who reject God and believe in naturalistic evolution very much want intelligent life to be found elsewhere in the universe as they believe that will vindicate their religion of evolution! But they won’t find it: it’s not there to find.

I discussed this item today on Answers News with cohosts Dr. Georgia Purdom and Dr. Jennifer Rivera. Answers News is our twice-weekly news program filmed live before a studio audience here at the Creation Museum and broadcast on my Facebook page. We also covered the following topics: