How Did the People and Animals Leave the Ark?

on February 16, 2015
Featured in Thinking Outside the Box
Share:
Email Using:
Gmail Yahoo! Outlook Other

When considering Noah’s Ark, people often wonder how Noah was able to fit thousands of animals on board. But have you ever wondered how the people and animals left the Ark? The Bible simply declares that Noah, his family, and the animals went out of the Ark, but it does not give the details.

The most natural exit for the Ark would have been the door built into the side of the Ark.

The most natural exit for the Ark would have been the door built into the side of the Ark (Genesis 6:16). Some people have objected to the door as a possibility since the Bible states that the Lord shut them in. This thinking has led people to propose two other options.

Still others have supposed that Noah had constructed some sort of tool that could cut through the Ark’s hull. 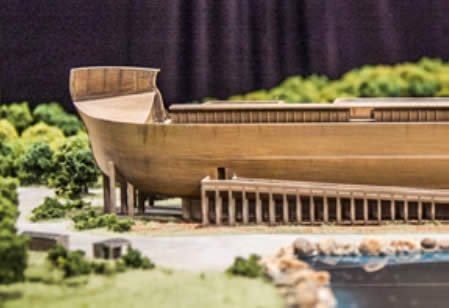 In this Ark Encounter model, Noah’s family and the animals would have gone up a ramp to enter the Ark through the door. Did they exit the same way?

Nothing in the text rules out the door as the exit. The interior of the Ark was designed for the entering of animals to reach their enclosures from the door, so it makes sense that they could simply leave the way they entered. If the door was on the second floor, as will be depicted at our Ark Encounter in northern Kentucky, an interior ramp could have been repurposed for external use.

While we may not know the location of the Ark’s exit, we do know that Noah, his family, and the animals safely left the Ark, just as Scripture states.

Previous Article A Pre-Flood Empire? Next Article Did God Forget about Noah?