A recent paper in the scientific journal Palaeontologia Electronica purports to scratch away at the popular creationist claim that various rock impressions in Utah look like dinosaurs. Over the years these petroglyphs have provided creationists with evidence that humans made these drawings based on firsthand knowledge of dinosaurs.

Until now, many evolutionists would have agreed that Native Americans made these petroglyphs of some sort of animals. Yet some investigators now cast doubt on the rock drawings’ legitimacy, concluding that they include rock stains that creationists have exaggerated to make them look like animals.1

In this report, based simply on images from binoculars and telephoto lenses (notably, there were no paint tests, etching experiments, weathering experiments, etc.), the authors have declared the drawings to be indecipherable. Thus, the dinosaur shapes are imagined, not real.

While Christians should always be careful and cautious to avoid reading into physical evidences such as petroglyphs, there’s no reason to dismiss them simply because of claims that lack rigorous scientific methodology.2 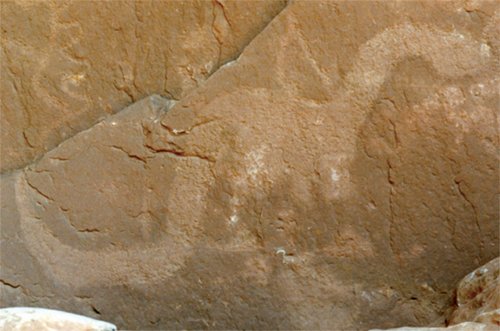 A petroglyph of a dinosaur at Kachina Bridge, Natural Bridges National Park, Utah