Worm lizards, burrowing reptiles native to continents and islands around the globe, appear at about the same place in the fossil record all over the world, just above the K-T (Cretaceous-Paleogene, aka Cretaceous-Tertiary) boundary. These creatures are not particularly mobile, so how did they get there? The solution to this biogeographical mystery is startling to evolutionists but supports an idea long held by many Bible-believing scientists.

Spending most of their lives underground skulking about for invertebrates on which to munch, worm lizards, despite appearances, are not snakes.1 And unlike the earthworms they also resemble, worm lizards have backbones, teeth, eyes, and loose skin covered with juxtaposing rectangular scales arranged in rings around their long thin bodies.

Worm lizards belong to the suborder Amphisbaenia, named for the mythical serpent Amphisbaenia, which had a head at both ends. The worm lizard skull is well shaped for its life of burrowing. Depending on the species, a worm lizard’s head may resemble a shovel, a bullet, a keel, or a flattened spade. Worm lizard tails are shaped like their heads, helping them accordion through soil either forward or backward.

The 184 species of worm lizards are native to Africa, Europe, the Americas, and the Caribbean islands. They are probably varieties of the same created kind, or at most of two created kinds. Most worm lizards are legless, though a few species in the Bipedidae family have tiny forelimbs.2 Legless worm lizard varieties as well as a two-legged species (the lower Eocene Anniealexandria) are also well represented in the fossil record around the world but only above the K-T boundary. 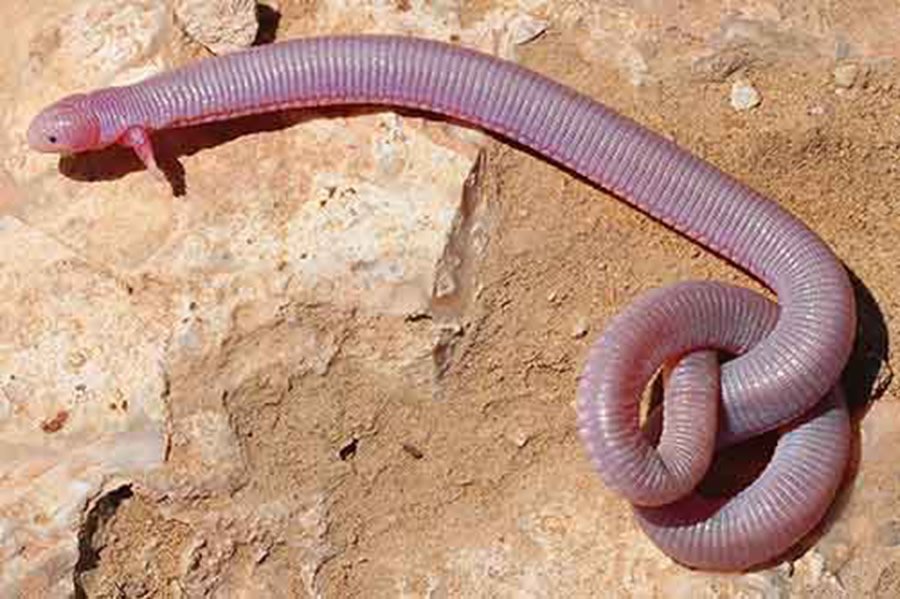 This Mexican worm lizard (Bipes biporus) is a species with two legs. Most worm lizards are legless. Both varieties appear on several continents in fossil-bearing strata thought by many Bible-believing geologists to have been deposited soon after the global Flood. Oceanic rafting on floating plant debris may explain how worm lizards reached many distant shores soon after the Flood. Image copyright 2012 Adam G. Clause, reproduced from http://www.bris.ac.uk/news/2015/april/worm-lizards.html. View larger image.

Worm lizards, according to a study recently published in Proceedings of the Royal Society B, appear in the fossil record much too “late” for their worldwide distribution to be explained by slow continental drift following the breakup of the supercontinent Pangaea. “Continental drift clearly can't explain the patterns we're seeing,” explains lead author Nicholas Longrich. “Continental breakup was about 95 million years ago, and these animals only become widespread 30 million years later.” Land bridges do not seem to explain the full range and evident rapidity of their dispersal. The only solution to the conundrum, the researchers conclude, is that after presumably evolving during the Cretaceous period (without a fossilized trace) worm lizards rapidly rafted their way around the world on mats of vegetation driven by ocean currents.

“Once you eliminate the impossible, whatever you're left with, no matter how improbable, must be the truth,” Longrich says. The amphisbaenian lifestyle would have suited them for long impromptu voyages, they write:

While it seems improbable that burrowing reptiles would cross oceans, they may have done so as passengers on floating islands—rafts of trees, bound together by roots and soil, that are sometimes seen adrift at sea. More frequently, individual trees can fall off eroding cliffs into the sea, or fall into rivers where they may be swept downstream and out to sea. Soil bound in roots of individual trees or rafts could potentially carry amphisbaenians out to sea, burrow and all. Given their low metabolic rates, amphisbaenians could survive without food for the days to weeks required for the wind to push a raft or tree across the sea.3 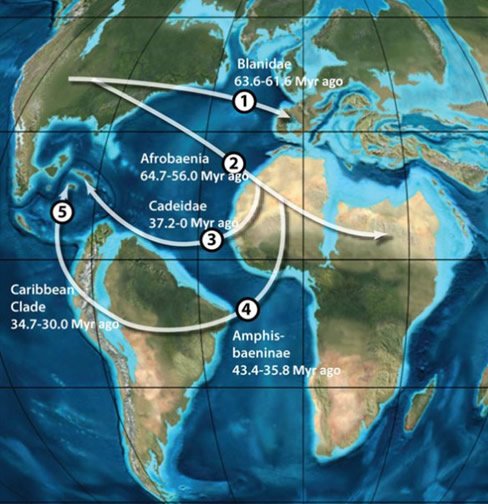 This map presents the evolutionary view of how many millions of years ago worm lizards, after supposedly evolving in North America, arrived in distant parts of the world on floating mats of vegetation. This replaces the earlier notion that worm lizards were distributed throughout the world over millions of years when the supercontinent Pangaea presumably broke apart. However, models consistent with biblical history explain the presence of worm lizards in their many locations past and present without invoking millions of years or any evolutionary claims. Following the global Flood about 4,350 years ago, representatives of all air-breathing created kinds of land animals disembarked from Noah’s Ark, reproduced and varied within their kinds, and replenished the earth. Migration across land bridges formed during the post-Flood Ice Age and oceanic rafting on floating debris are two ways these animals likely reached distant shores. Image reproduced from Nicholas Longrich et al., “Biogeography of Worm Lizards (Amphisbaenia) Driven by End-Cretaceous Mass Extinction,” Proceedings of the Royal Society B (April 2015), doi:10.1098/rspb.2014.3034.

“It seems highly improbable not only that enough of these creatures could have survived a flood clinging to the roots of a fallen tree and then travelled hundreds of miles across an ocean, but that they were able to thrive and flourish in their new continent” Longrich says. “But having looked at the data, it is the only explanation for the remarkable diversity and spread of not just worm lizards, but nearly every other living thing as well.” The authors conclude that oceanic rafting may be the answer to biogeographic riddles involving other animals that “cannot owe their distributions to the Mesozoic fragmentation of Pangaea.”4

The authors have arrived at a reasonable conclusion, but for the wrong reasons. They reject Pangaea’s breakup in favor of oceanic rafting as a viable way to explain worm lizard distribution because molecular clock dates and the dates assigned to the fossil record don’t match up. Because both are rooted in circular reasoning and the unverifiable, biblically incorrect, worldview-based dates assigned to the worm lizards’ place in the fossil record, the timelines at the heart of the worm lizard study must be disregarded.

Furthermore, when understood in the light of biblical history unfettered by the enormous dates assigned to it through the biases of an evolutionary worldview, we see that Pangaea may have been a supercontinent that formed and broke up during the global Flood.5 Therefore, Pangaea’s possible underwater breakup cannot explain the biogeography of any land animals, let alone worm lizards.

Rafting and Other Migratory Methods

Largely rejected by modern evolutionists, oceanic rafting is a mechanism that many Bible-believing creation scientists have proposed as one of the ways animals migrated to replenish the world after the global Flood. Darwin and other early evolutionists also thought plants and animals made their way all over the world on rafts of vegetation, though over a much more protracted time course. After the discovery of plate tectonics and continental drift, however, many evolutionists saw oceanic dispersal as “a rare phenomenon and an explanation of last resort.”6

God’s Word informs us that the global Flood destroyed all air-breathing land animals that were not on the Ark with Noah (Genesis 6:17). The Flood and related post-Flood catastrophes swept away and sorted countless animals and plants and buried them in waterborne sediment. At God’s direction, representatives of all kinds of air-breathing land animals were preserved on the Ark (Genesis 7:14–16). After the Flood, the descendants of the animals that disembarked from their epic year with Noah reproduced and dispersed.7 But in a world recovering from the global Flood, how did these animals get all over the world as they clearly did?

The unique meteorological conditions associated with the Flood explain the Ice Age that followed. And land bridges resulting from the lowered sea level during the Ice Age likely facilitated the transit of diversifying post-Flood animal species across what today are large watery barriers. Just as the global Flood set up the conditions that spawned the Ice Age, so its destructive power would have likely left a great deal of debris in the form of logs and other vegetation floating on the oceans for a time.

Mats of vegetation carried on ocean currents . . . may well have carried many plants and animals around the world to start new lives after the devastating Flood.

Mats of vegetation carried on ocean currents, therefore, may well have carried many plants and animals around the world to start new lives after the devastating Flood. This would explain how various species of worm lizards came to be preserved in sediment that may have been deposited soon after the Flood during the Ice Age. While creation scientists are still sorting through several models of Flood geology to determine the boundaries between Flood-deposited sediment and that deposited in the aftermath of the global Flood, some regard strata above the Cretaceous as largely the result of post-Flood catastrophes. Thus, the widespread presence of multiple species of legless worm lizards just above Cretaceous strata suggests these animals, if not buried during the Flood itself, may have been among those animals rapidly carried around the world on log mats in the years after the Flood.

While no scientist recorded how animals migrated to replenish the earth after the Flood, several observations from recent history offer support for this model. The 1980 explosion of Mount Saint Helens created violent conditions on Spirit Lake, leading to the formation of an enormous floating log mat about 70 miles long.8 Modern-day tsunamis have produced tragically impressive masses of floating debris on the ocean. Much more extensive log mats formed from the infinitely more catastrophic global Flood could have supplied the means to take life across the waters. According to “Rafting: A Post-Flood Biogeographic Dispersal Mechanism,” a paper presented at the 2003 International Conference on Creationism, such post-Flood oceanic rafting could explain the fact that many matching clusters of diverse species around the world9 are distributed in a way that corresponds to the patterns of ocean currents. And after a 1992 storm washed crates containing nearly 29,000 rubber duckies and other bathtub toys overboard in the Pacific, beachcombers worldwide soon saw the power of ocean currents to carry floating cargo to widely separated distant shores.

God created the world to be inhabited (Isaiah 45:18), and He preserved animals on the Ark He had Noah build in order to repopulate the world when the Flood was over. God equipped them to adapt to many ecological niches and conditions by varying within their created kinds. Here we see affirmation of one of the ways the animals disembarking from Noah’s Ark replenished the earth, just as God intended. Once again, what we see in God’s world affirms what we read in God’s Word.

Previous Article Does Hugh Ross Believe in Soulless Ancient Humans? Next Article Attempts to Trace Life Back to Chemical Origins Still Maps the Willful Ignorance of the Hunters