Does Your Dog Yawn Because He Cares?

What does your doggie’s copycat yawn reveal about evolution?

Anywhere from 45 to 60% of humans are susceptible to contagious yawning.1 Scientists do not know why, but many studies suggest that contagious yawns are related to empathy—the ability to share or relate personally to the emotions of another.

What about dogs? Do our dogs really yawn when we yawn? And if so, why? Evolutionary biologists consider this question important for understanding the evolution of mammalian empathy.

Empathy, while certainly a human trait, is seen in some animals. To evolutionists, the fact that primates sometimes appear to demonstrate empathy is seen as evidence of their shared evolutionary links with humans. Chimps, bonobos, and baboons display contagious yawning within their own species and are more likely to do so when the yawners have a close social bond. Since contagious yawning seems unrelated to issues of safety and survival, evolutionists wonder what drove the development of this apparently empathetic behavior. 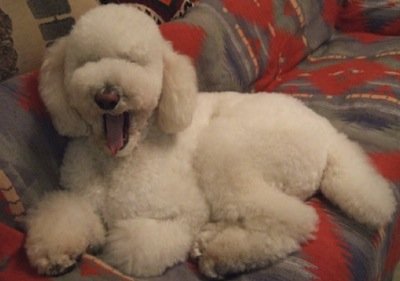 This poodle’s owner just yawned. Dogs, like Kikumaru here, catch yawns from humans but not from other dogs. Many of us personify our pets, seeing our own emotions in them. Do dogs somehow connect with us emotionally by yawning when we yawn? Evolutionary biologists want to know. Image by Toshikazu Hasegawa, via Science.2

Contagious yawning has been observed in only two non-primate animals—budgerigar birds and dogs. Curiously, canines only exhibit contagious yawns in response to humans, not to other dogs. Studies to document this contagious canine yawning and to determine its cause have produced contradictory results. Some suggest that dogs yawn because they are stressed, like macaques do. Researchers in Tokyo conducted a well-controlled study confirming the reality of contagious canine yawning and ruling out any relationship to stress.

“If contagious yawning indeed is related to the capacity for empathy,” the researchers write, “it could become a powerful tool to explore the root of empathy in animal evolution by studying cross-species contagious yawning. Therefore, there is a need for further experimentation on this issue, especially in non-primate species.”3 They hope their standardized methodology will help future investigators “understand dogs’ reactions to human and dog stimuli, which in turn will help us to gain insight into the evolutionary origin of contagious yawning.”4

To Yawn or Not To Yawn?

The research team tested 25 dogs of assorted breeds with their owners. Thirteen of the 25 dogs yawned. Most yawns were associated with the owners’ yawns. Cardiac telemetry showed that no increase in heart rate occurred, ruling out anxiety in the dogs. Strangers’ yawns and non-yawning open-mouth motions served as controls and triggered substantially fewer doggie yawns. Since the contagious yawns were significantly associated with emotional social attachments, the researchers say they “may indicate that rudimentary forms of empathy could be present in domesticated dogs.”5

The fact that canines can only catch yawns from humans is an evolutionary puzzle.

The fact that canines can only catch yawns from humans is an evolutionary puzzle. Speculating on the evolutionary basis for this distinction, the researchers write, “During domestication, dogs have become selected to maintain attention towards humans, which seems to be critical for dog-human communication and social learning. Thus, it is possible that dogs are predisposed to respond more intensively, or only, to human social cues.”6 However, dogs are adept at communicating with other dogs using visual signals (body language, facial expressions). Therefore, they write, “It is also possible that the capacity for contagious yawning evolved as an adaptation for communication with conspecifics [other dogs], and that this capacity was later transferred to dog-human interaction.”7 They hope future studies will confirm the reality of canine empathy and unravel its evolutionary basis.

Evolutionists generally hold that mammalian empathy “evolved in the context of the parental care that characterizes all mammals”8 and also “plays a role in cooperation.”9 Thus while contagious yawning has no direct survival benefit, if it is associated with optimized communication and attachment, then it is at least associated with traits directly affecting survival. Yet apart from the tendency of evolutionists to demand an evolutionary origin for everything, it should be noted that no molecules-to-man evolution is in view here.

A Dog Is a Dog, Of Course

Nothing about so-called empathetic animal behavior supports any evolutionary process leading to the eventual development of human empathy.

Dogs remain dogs. Furthermore, domestication of dogs has nothing to do with evolution but has plenty to do with both natural selection and artificial selection of dogs with desirable traits. Neither natural nor artificial selection involves the acquisition of genetic information to become some new kind of animal. Furthermore, humans alone are made in the image of God. Our strong ability to empathize neither elevates empathetic apes (or our beloved pets) to near-human status nor demonstrates that humans are animals or descended from animals. The diversity and complexity of animal behaviors is amazing. It is also fairly common for us to personify animals as we interpret their behavior, sometimes attributing more social sophistication to them than they deserve. But nothing about so-called empathetic animal behavior supports any evolutionary process leading to the eventual development of human empathy.