by Prof. Andy McIntosh on May 8, 2007
Share:
Email Using:
Gmail Yahoo! Outlook Other

In July 2006 I had the privilege of visiting Utah and wandering through some of the amazing geological formations there. 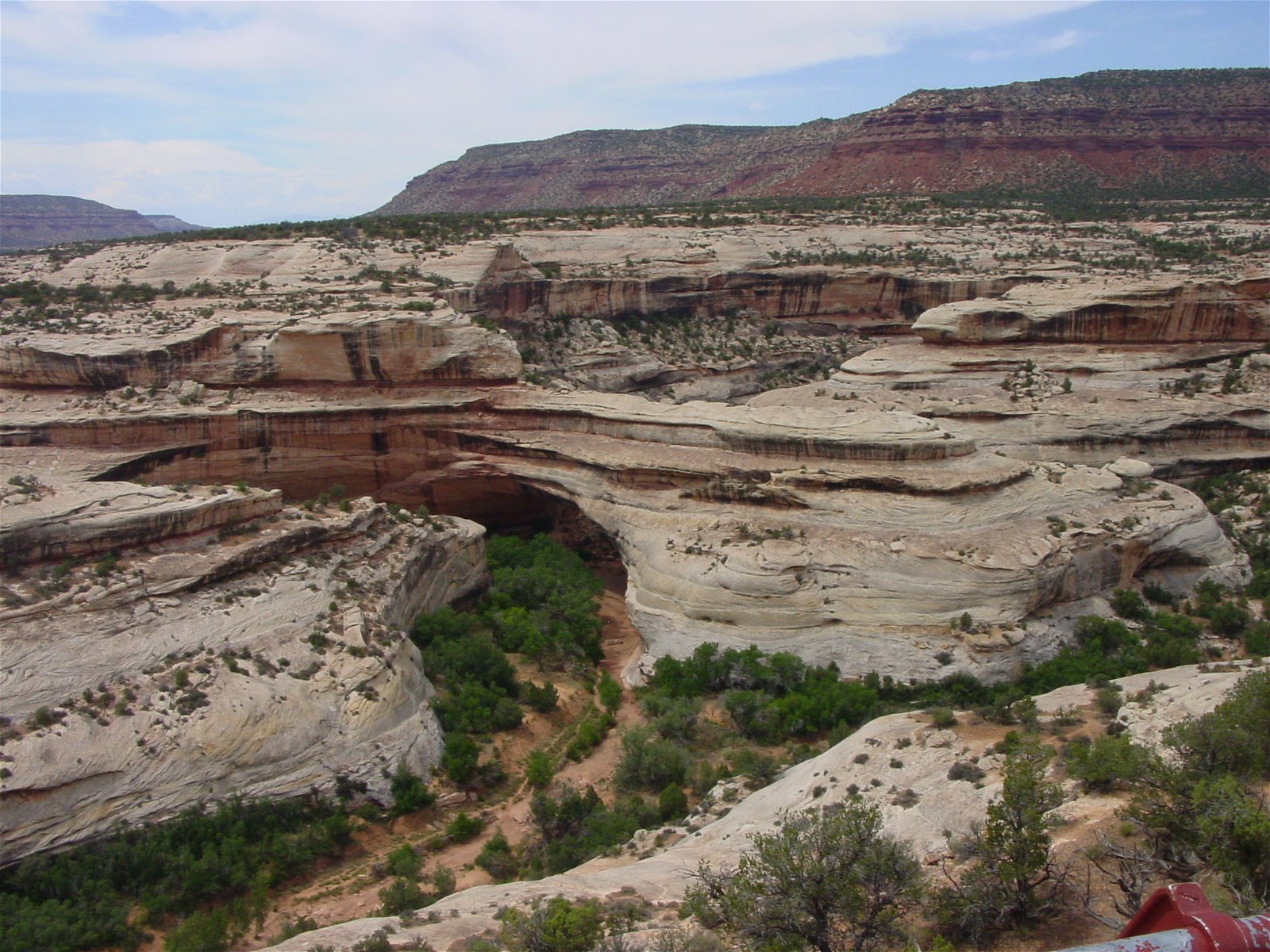 The dry conditions and immense heat (regularly high temperatures of 100°F—about 38°C) make it harsh by European standards. But Utah can experience heavy snowfalls in the winter, as so much of the state is at a high elevation. The whole area is so vast that one can go for miles without seeing a town or village. On one drive we almost ran out of petrol (gas) due to miscalculating the distances involved. 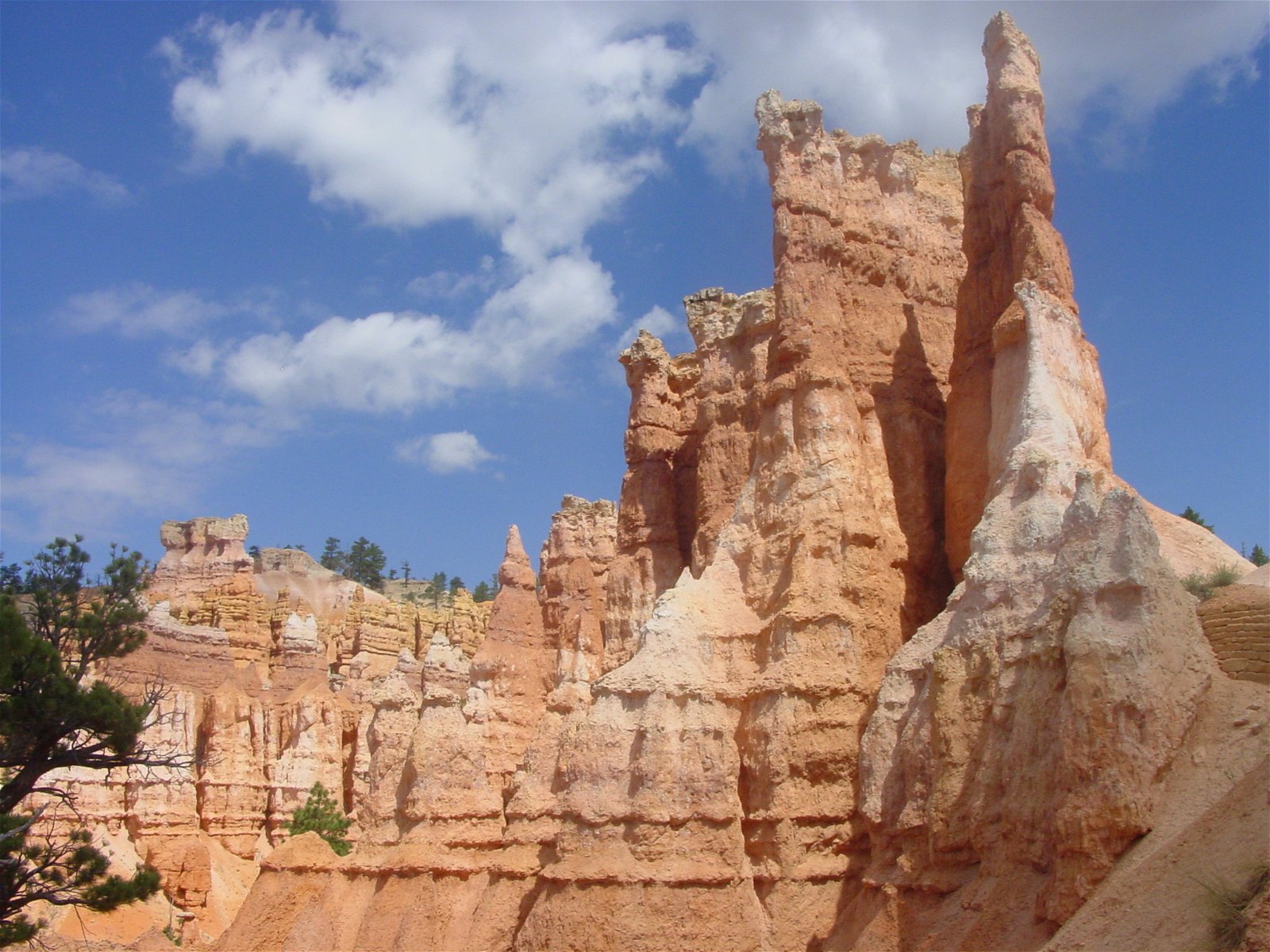 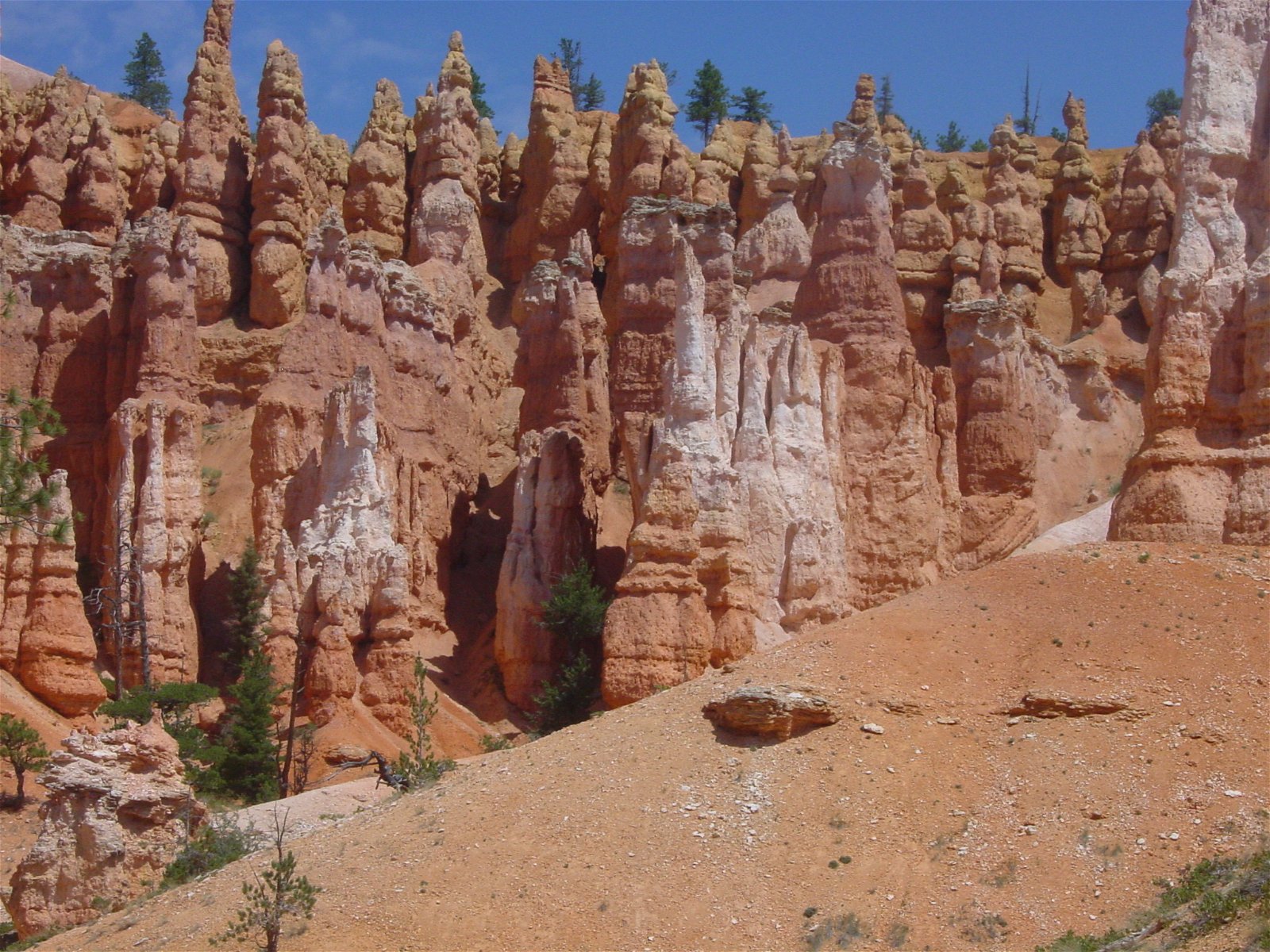 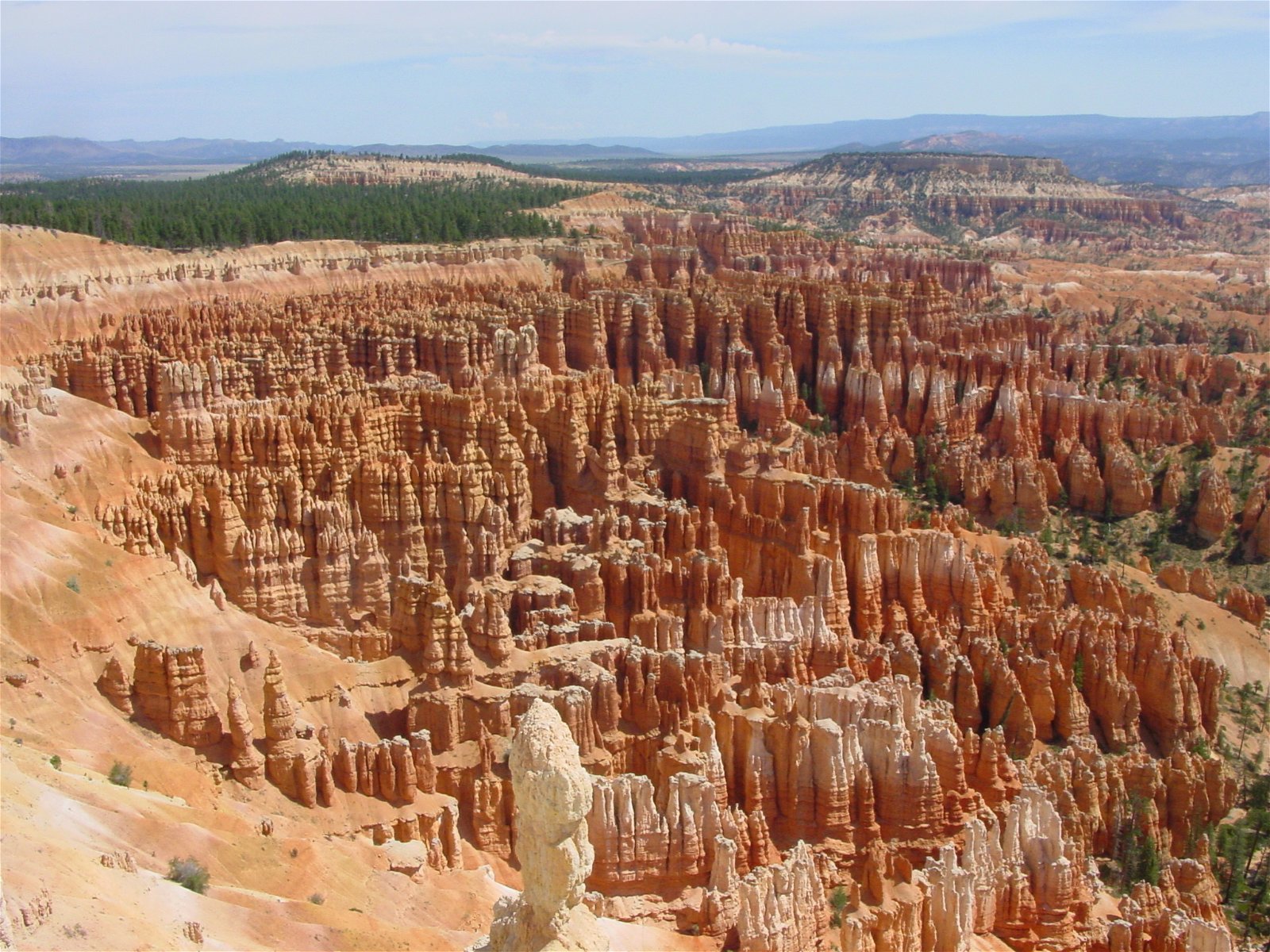 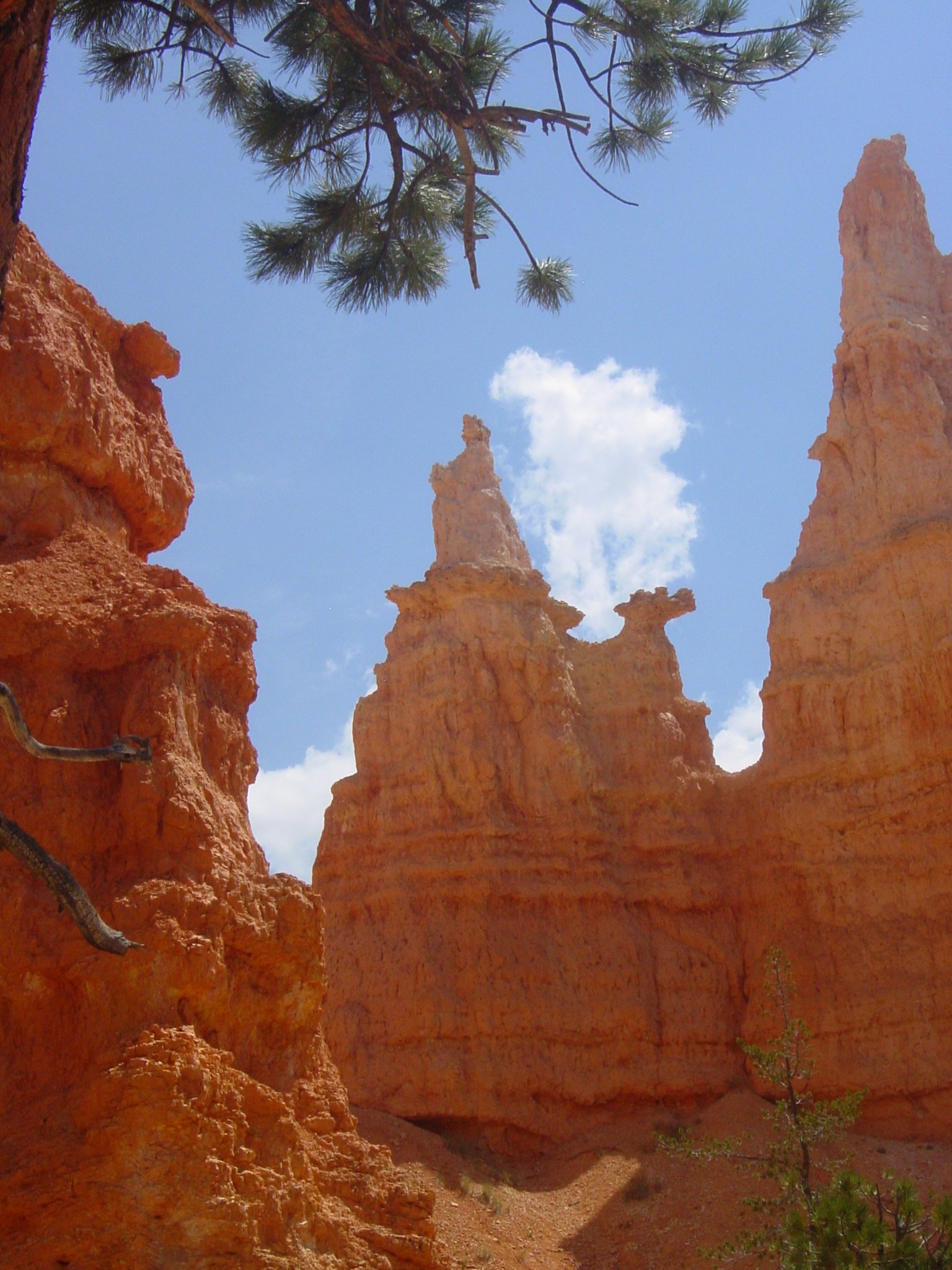 All around on the east of the state, one can see evidence of large deposits of Permian to Jurassic sandstone which are now part of the Natural Bridges National Monument about 40 miles north of Mexican Hat and Arches National Parks around Moab. The apparent evidence of vast deposition followed by vast erosion speaks of catastrophic floodwaters. The ground rises dramatically on the west of the state toward south-central Utah to “younger” (in evolutionary explanations) Cenozoic formations in the regions of Cedar City and Cedar Breaks National Monument and Bryce and Zion National Parks. To the south, over into Northern Arizona, lies the marvel of the Grand Canyon with its own evidence of catastrophic erosion as vast quantities of water cut their way a mile deep through solid rock. In Utah, canyons have also been formed by catastrophic water flows but not on quite so vast a scale. 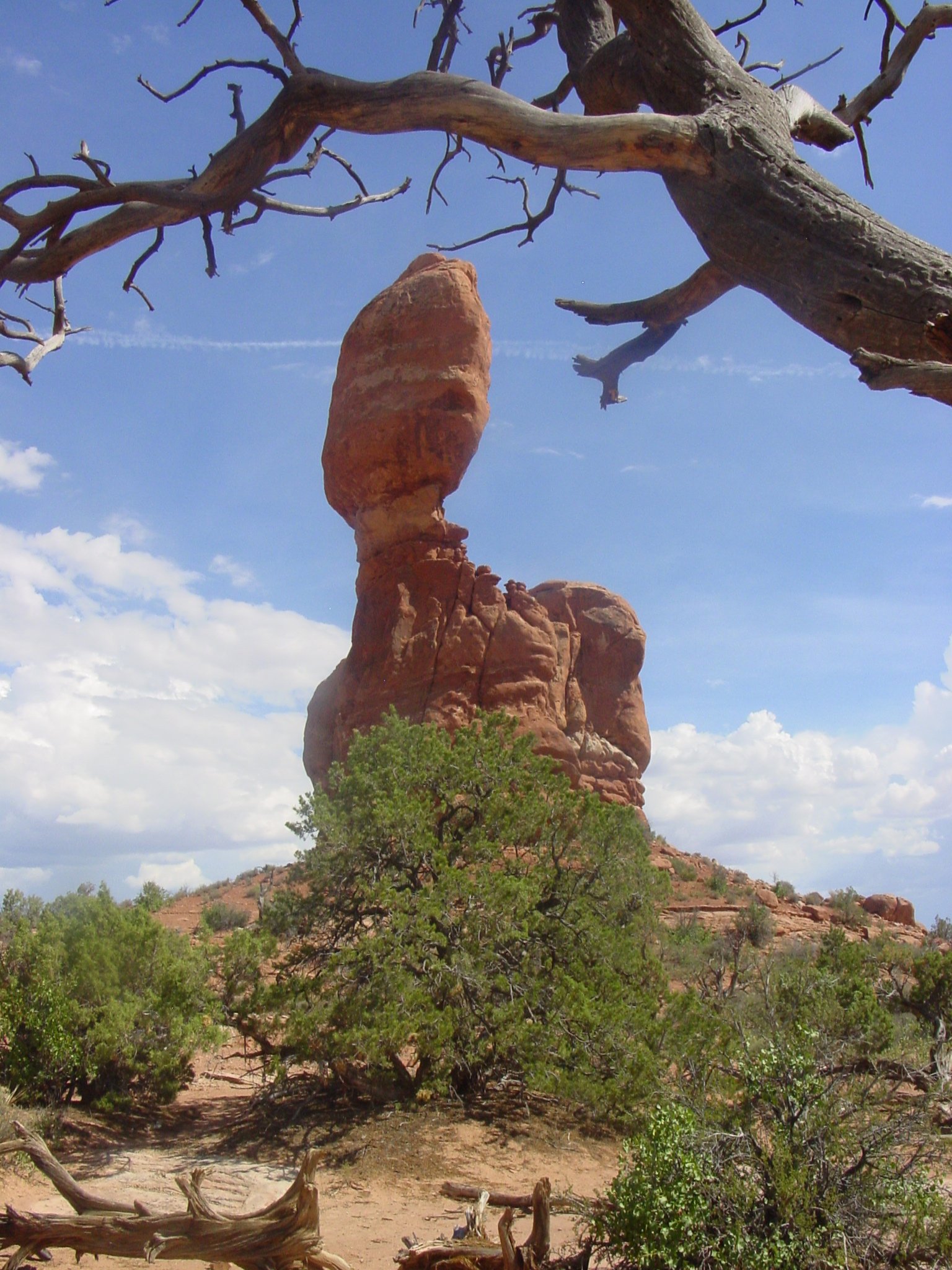 However the retreating floodwaters and constant erosive effects of ice and water over the 4½ thousand years since the Flood have left remarkable Hoodoo formations (tall towers) as different layers have different characteristics of hardness and softness. We see many examples of rock in Bryce Canyon where harder rock is lying on thin supports of softer rock (e.g., the “Balanced Rock” in Arches National Park and that of the statue in Bryce Canyon which looks remarkably like Queen Victoria—perhaps there are still some Royalists in the U.S. after all!). 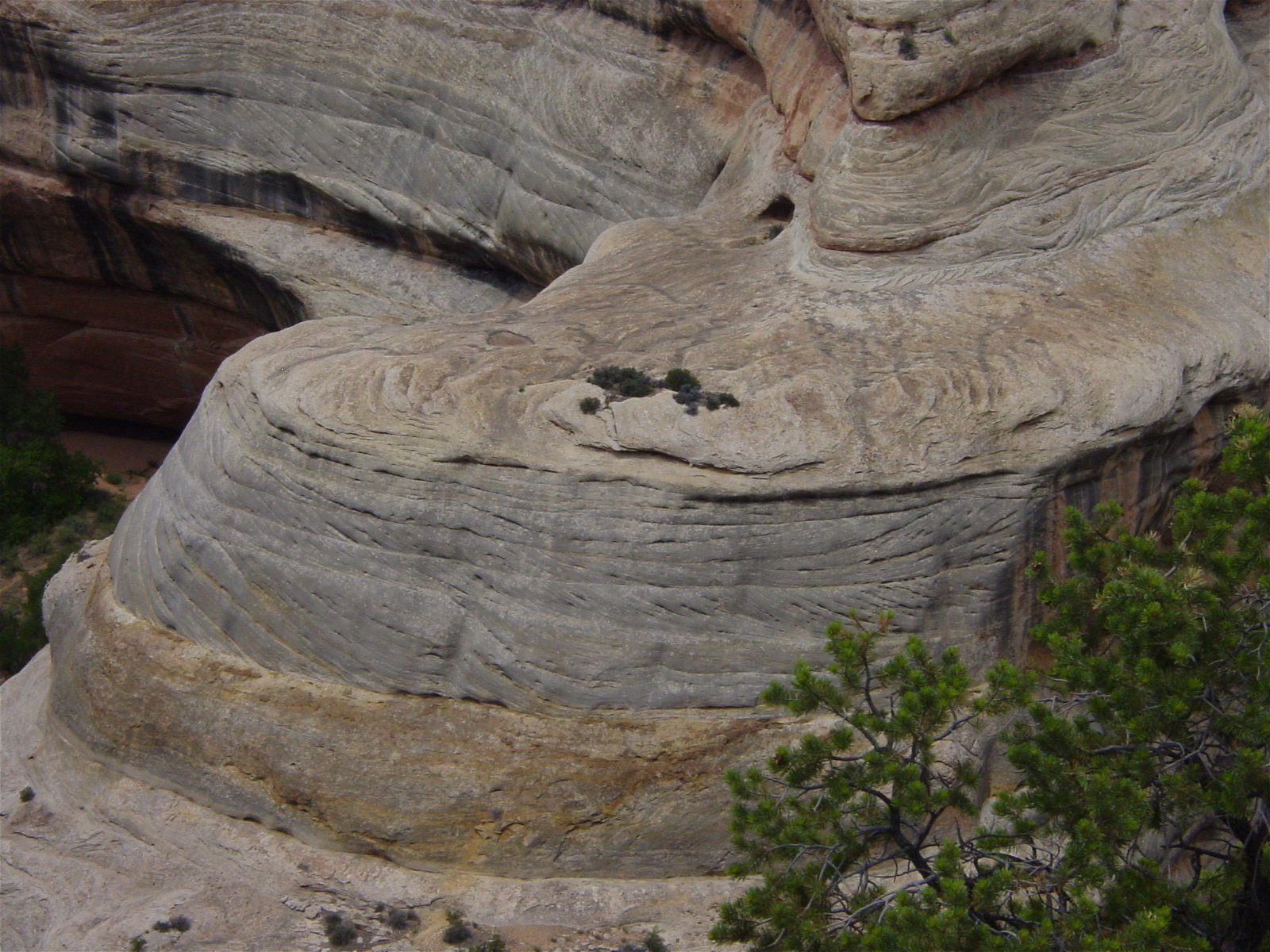 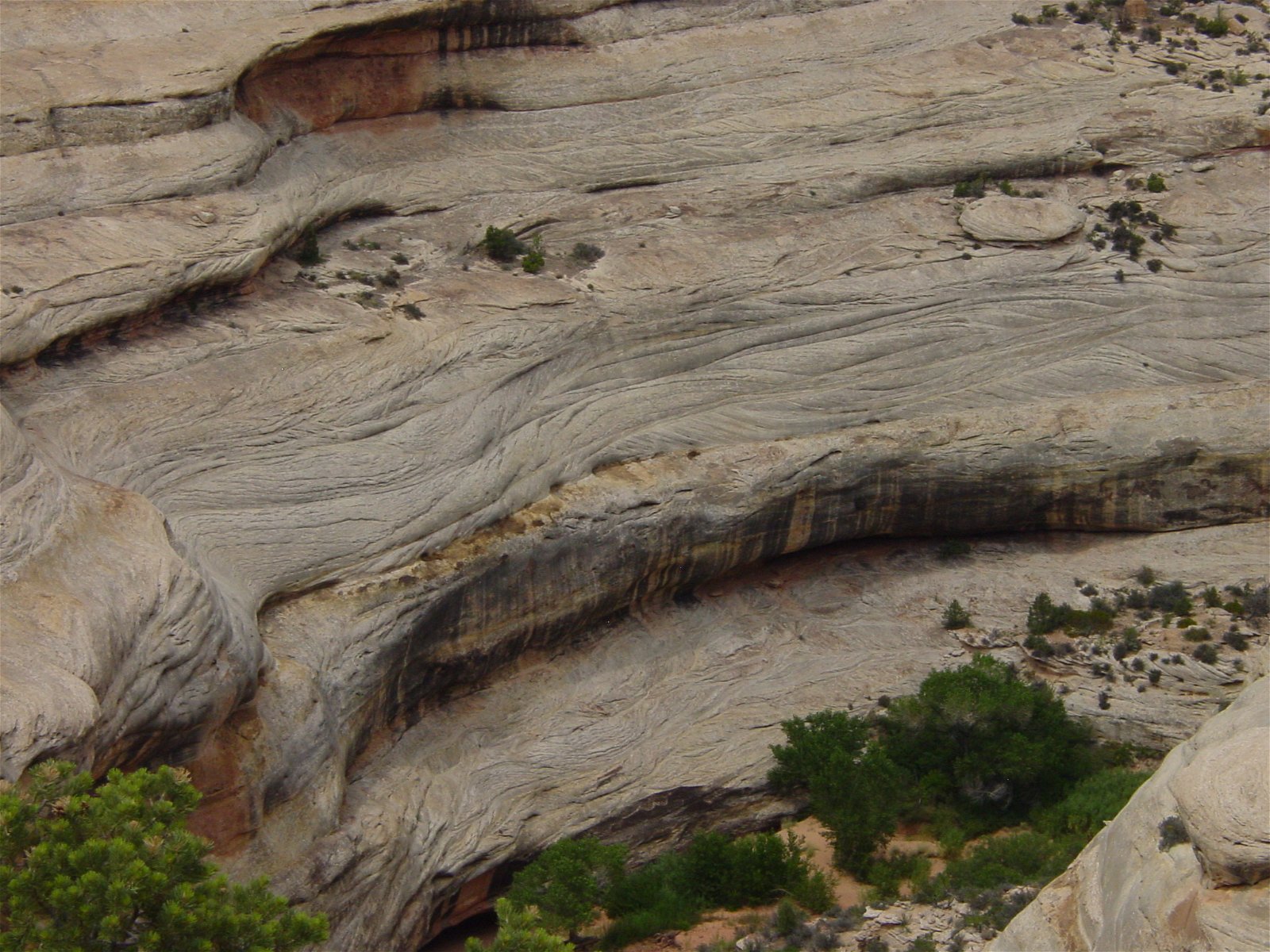 Within the sandstone formations visible at Natural Bridges National Monument there is ample evidence of the original deposition of the sediments (before erosion) occurring catastrophically. This comes from the cross bedding nature and the large area of the sediments themselves. As can be seen from the close-up photographs of the rock, there are strong current marks where individual layers are caught up in cross currents. This indicates moderate-to-fast flowing water has deposited the original sediments now exposed by the subsequent erosion. 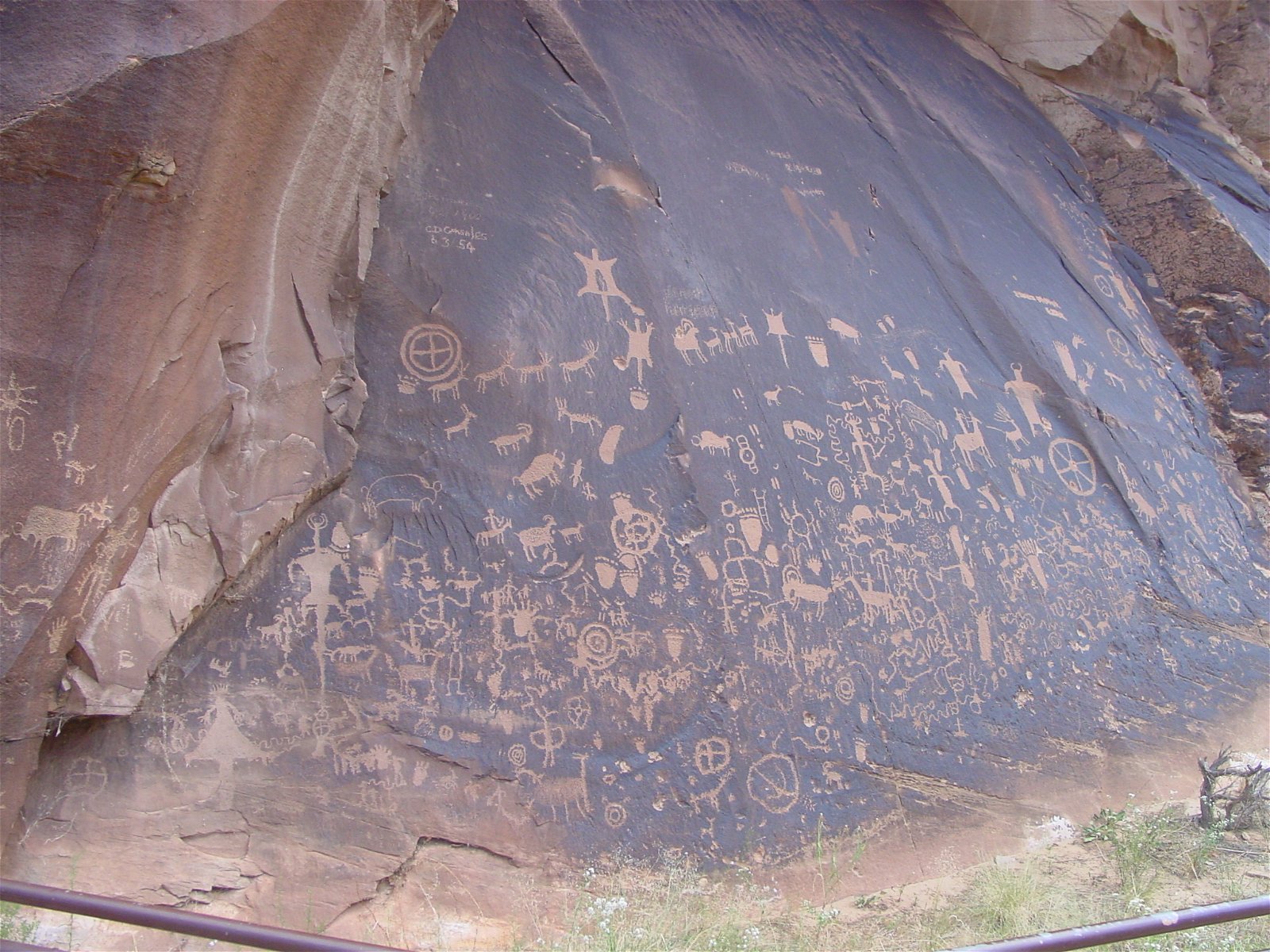 All over Utah there is evidence of Indian culture in the past: petroglyphs (drawings) inscribed on the rocks. Such rock art found all over Colorado, New Mexico, Utah, Arizona, and other western states is not fully understood. No one really knows what the concentric circles mean, for instance, on Newspaper Rock in southeast Utah, or the handprints sprayed on many of the rocks, but some are clearly related to hunting, and the animals are deer, birds, and other creatures we see today. The rock called Newspaper Rock in southeast Utah (near Moab) is aptly named because of hundreds of petroglyphs all inscribed together. 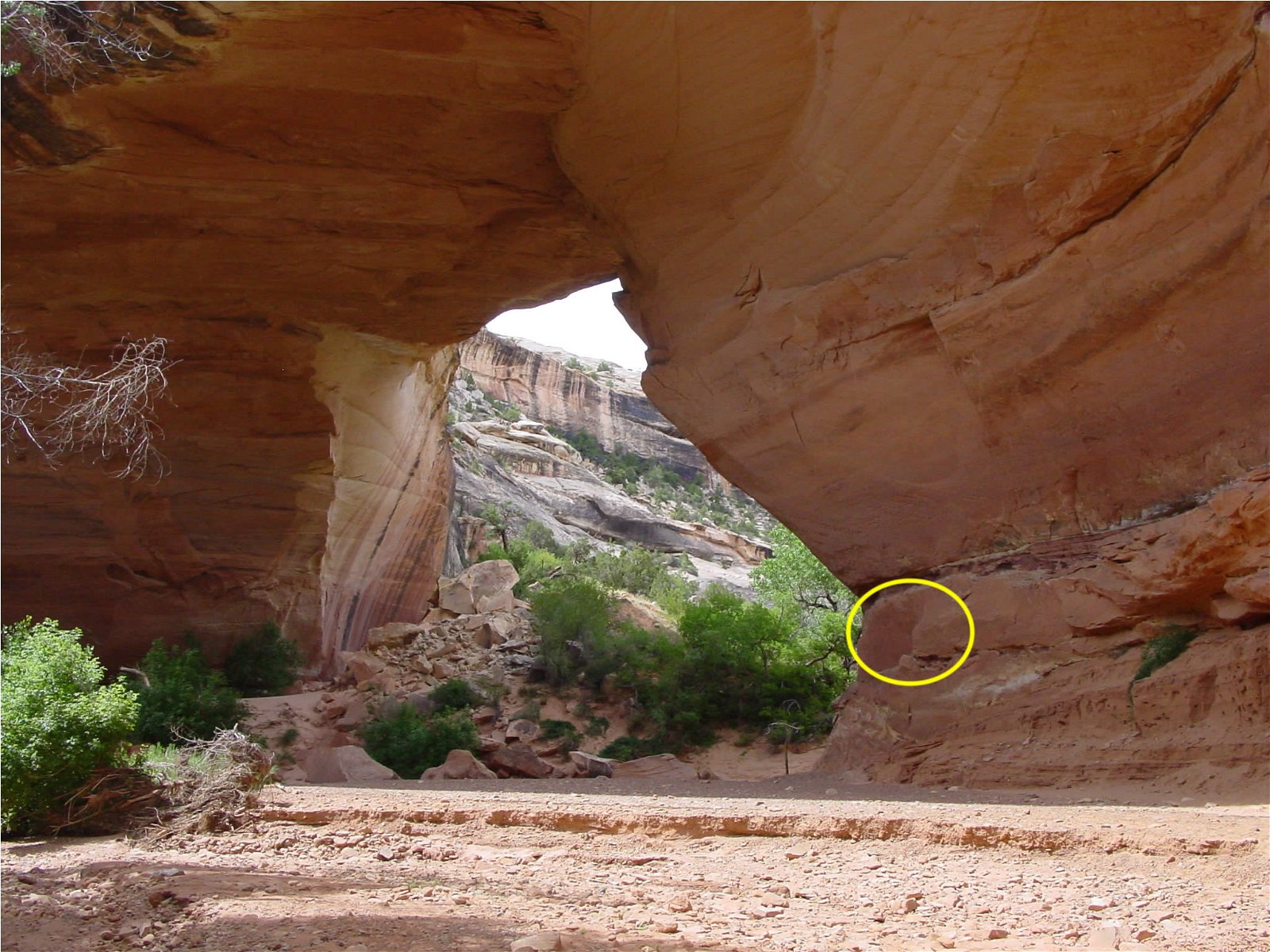 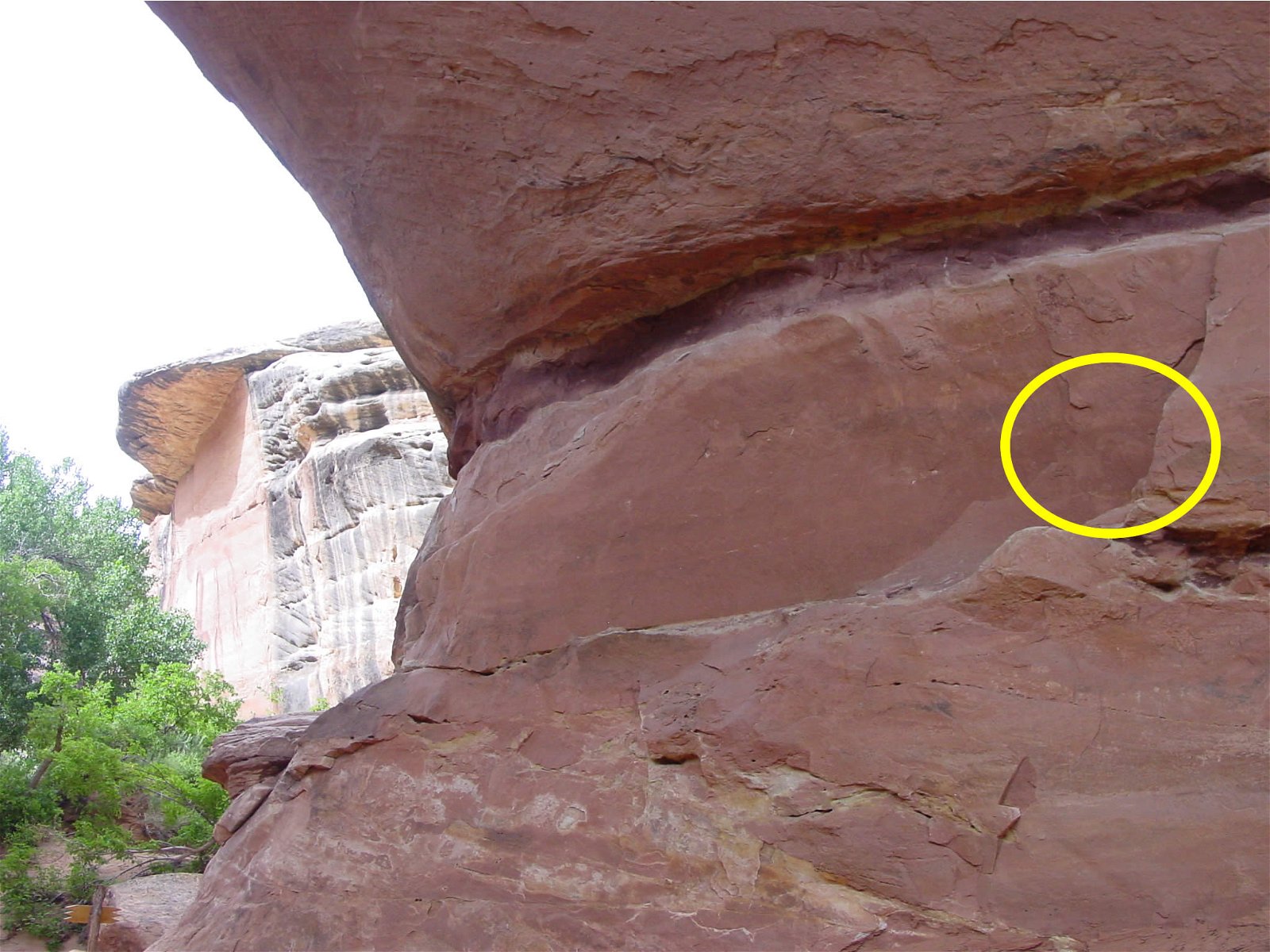 The highlight for me was seeing Kachina Bridge in Natural Bridges National Monument. This natural bridge of rock has been formed by water gouging out the softer rock beneath. It is 210 feet (64.0 meters) high and spans 206 feet (62.8 meters). We hiked down to the bottom of the valley to see it close up, and sure enough, there were a number of fading-but-still-visible petroglyphs including one of a sauropod dinosaur. The dinosaur image was in the same style as all the other petroglyphs on the rock near Kachina bridge. 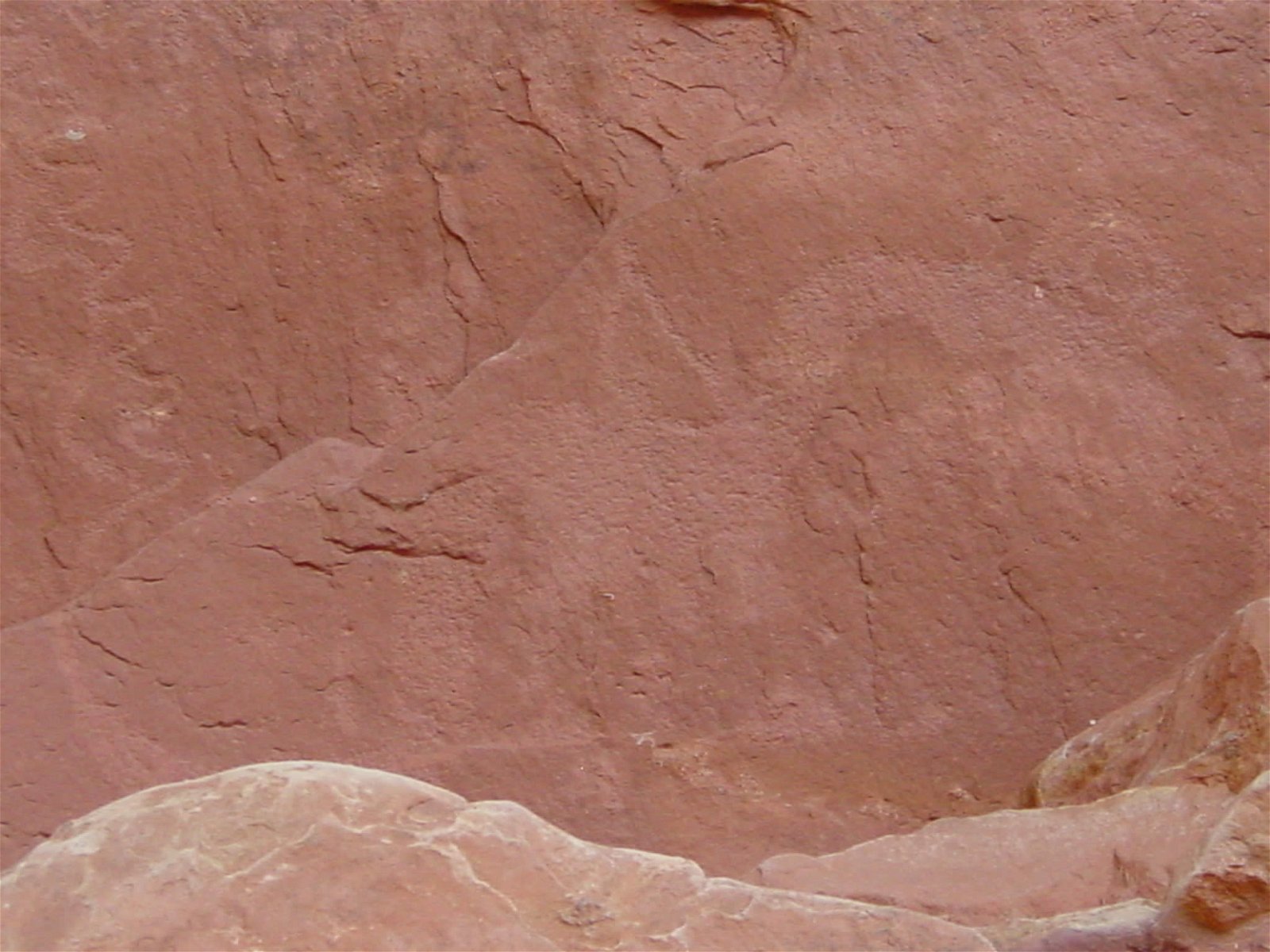 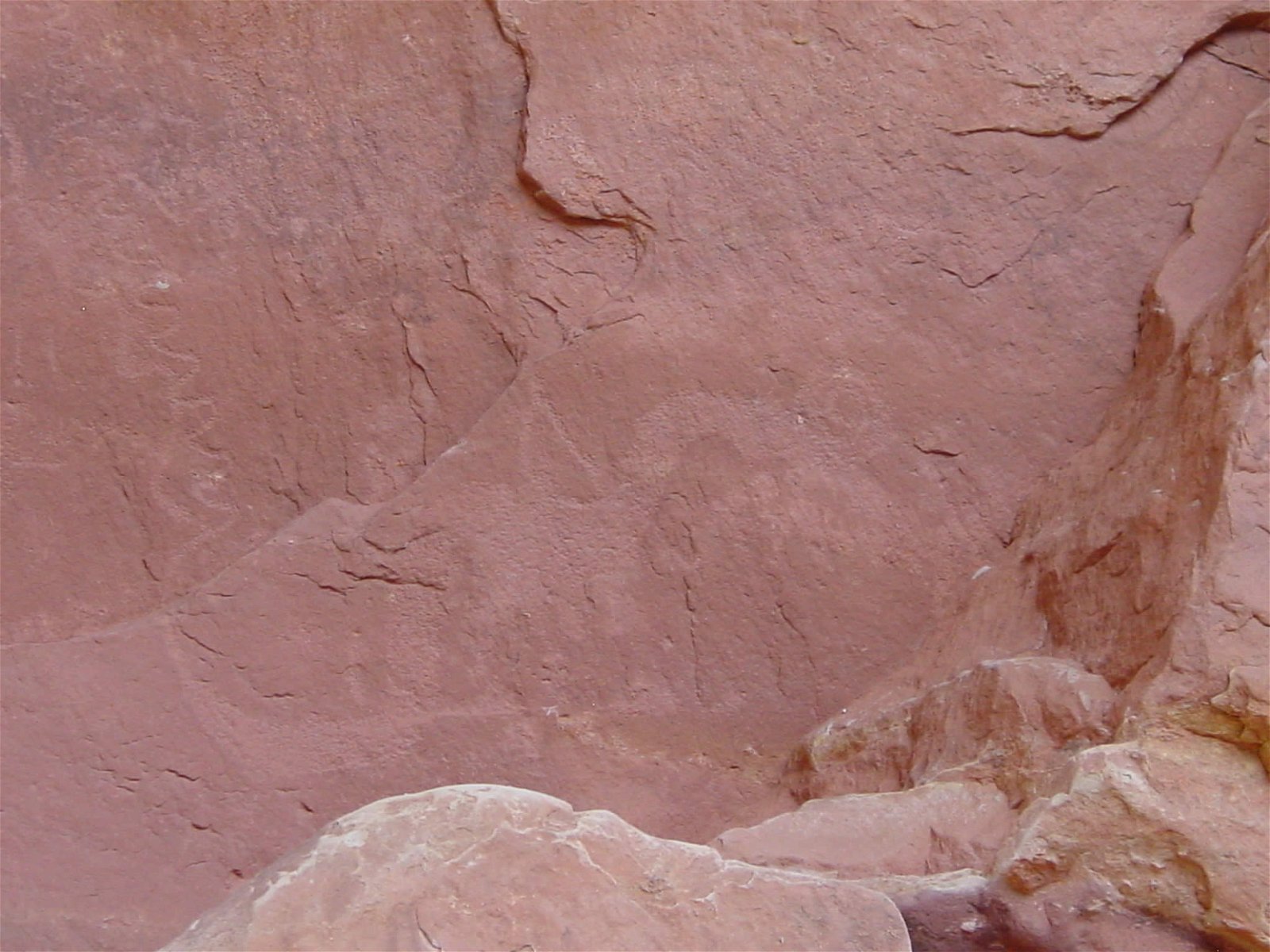 The petroglyph of a sauropod dinosaur clearly has important implications—indicating that dinosaurs were indeed known to men after the Flood until they eventually died out and became (apparently) extinct. Two of each kind of dinosaur would have been taken aboard the Ark and then multiplied in the post-Flood world until the environment and man eventually wiped them out. There is other evidence of large creatures similar to dinosaurs living with man (such as what is etched on Bishop Bell's 15th-century tomb in Carlisle Cathedral). This evidence of dinosaurs with man in relatively recent times is indirect evidence of the Flood, as it shows the fallacy of millions of years of gradual geological change being responsible for the rock record. The Flood explains the rocks and the fossil dinosaurs much better, and the Bible's history explains the existence of men and dinosaurs at the same time. 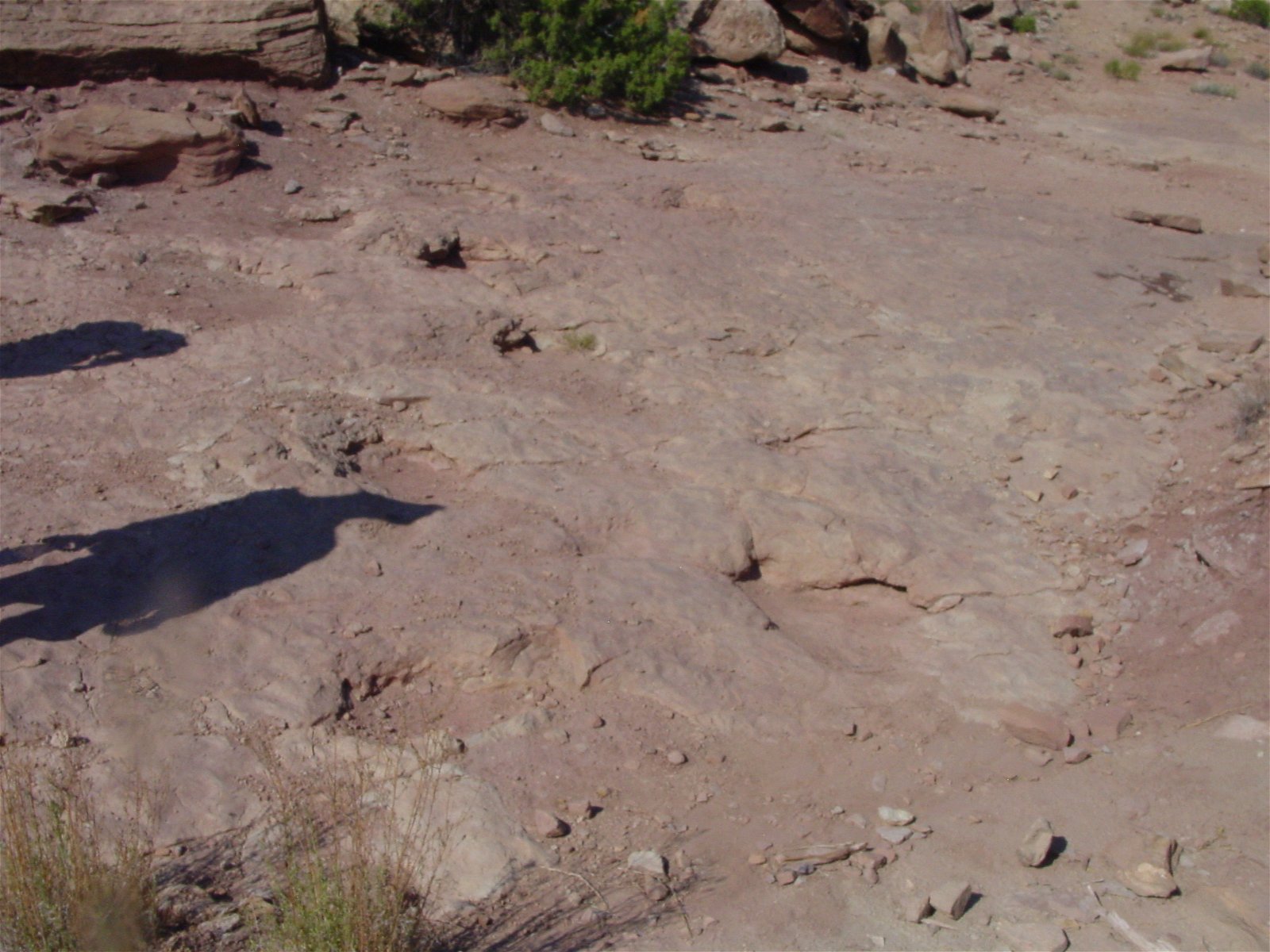 We were privileged to also see dinosaur tracks in southeast Utah. It is estimated that there are millions of dinosaur tracks around Moab, Utah. We almost gave up our search for them, however, as all we could see on the map was a small red dot marked “Dino tracks.” Driving down the road, we could see no way of getting to the spot because of a railway. Then we spotted a railroad crossing and a single sign saying “Dino tracks” pointing down a dirt road. We were now miles from anywhere in the middle of a sun-soaked desert with the layers of Copper Ridge around us! We came to the end of the track and to our surprise found a van parked with two people about to leave. I approached one who said he was a geologist. I then said that I was a Christian and proceeded to give him a Christian tract, to which he exclaimed that he also was a believer and a Creationist—it was a helpful creationist from Turkey and Ian Juby with him from Canada. A Divine appointment indeed in the middle of Utah! 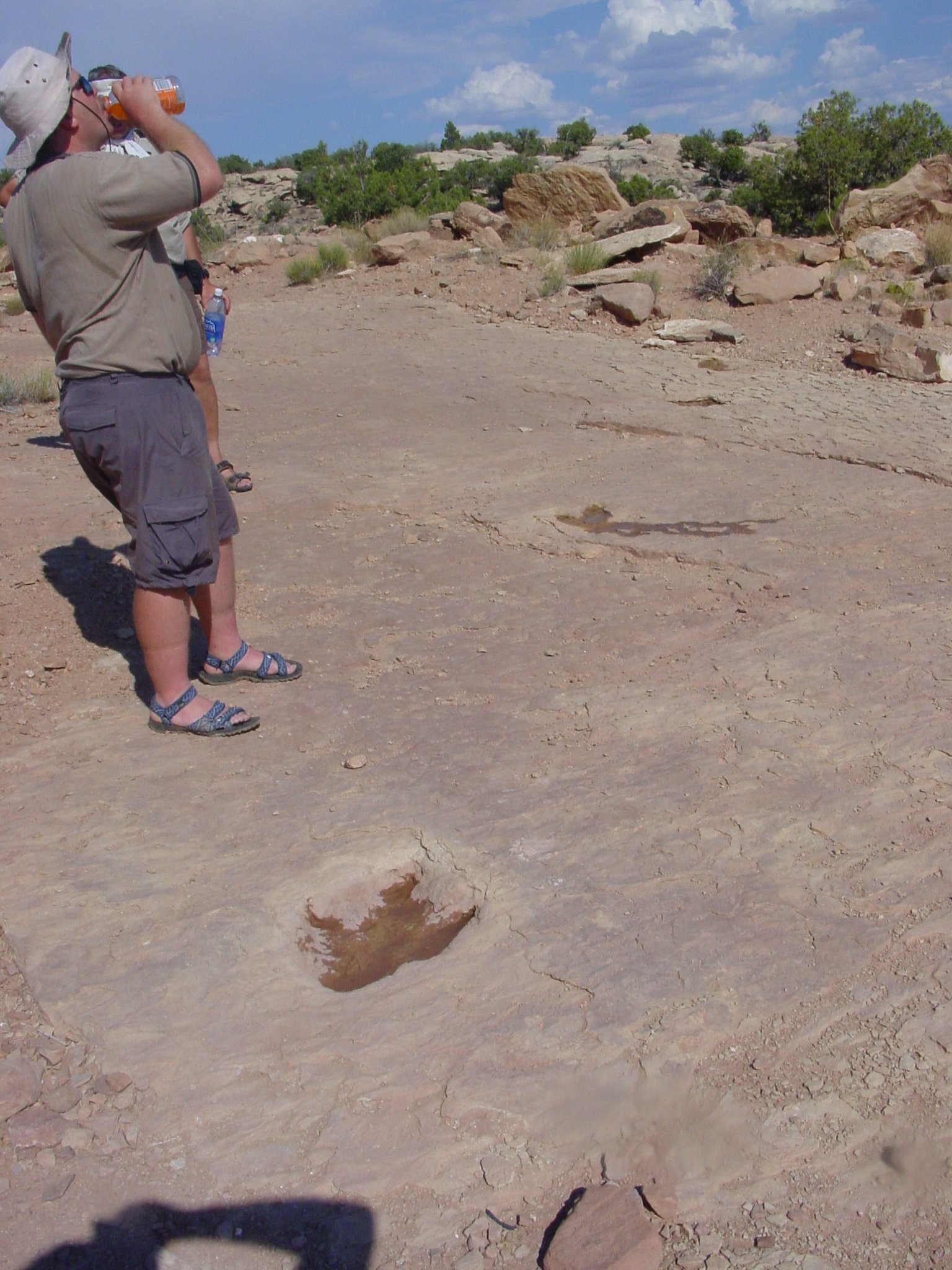 In the sweltering heat, they kindly revisited the site and showed us the dinosaur tracks of Copper Ridge. The sauropod footprints appeared to an untrained eye like large (1 meter across) potholes just like a large elephant might have made in the mud. The therapod tracks had a distinctive three toes and these tracks were clearly visible crossing the sauropod tracks. There is no way the fossilized tracks could have been formed slowly. A natural and much more obvious alternative is that such impressions had to have been buried quickly by more sediment before there was a chance for the print to deteriorate. This again is consistent with the biblical Flood. 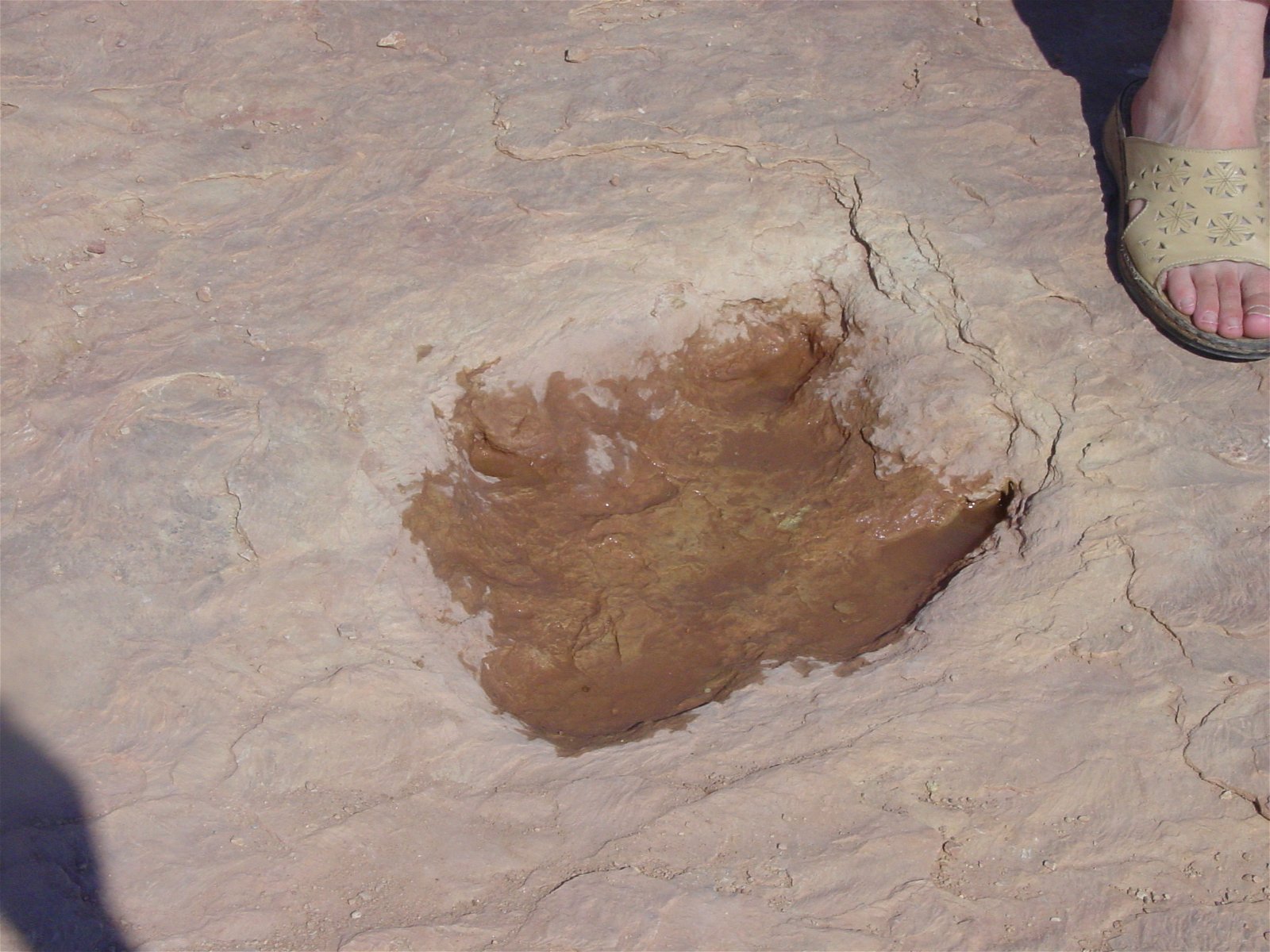 Though it was a memorable sight to see the beautiful colors in the formations of Bryce Canyon National Park, it was just as remarkable to see these dinosaur tracks as witness to the truth of God's Word. Utah is a great place to visit, but plan to take plenty of time. It takes days and weeks to go ‘round these isolated places, but it is well worth it, as it provides silent testimony to the immensity of God's judgment in the past, and the certainty of God's coming judgment upon this world. “For this they willingly are ignorant of, that by the word of God the heavens were of old, and the earth standing out of the water and in the water: Whereby the world that then was, being overflowed with water, perished: But the heavens and the earth, which are now, by the same word are kept in store, reserved unto fire against the day of judgment and perdition of ungodly men” (2 Peter 3:5-7).